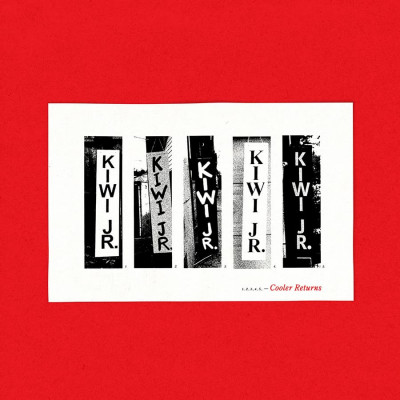 Almost exactly a year ago Canadian four-piece Kiwi Jr. released their debut album, Football Money. It won favour in some quarters for it’s goofy but convincing Pavement-style driving, alt rock. Whilst it may have been a little too faithful to Pavement’s sound, and despite the obvious lack of touring and promotion last year afforded, the band have got themselves signed to SubPop, on which they are now releasing their follow-up, Cooler Returns.

That’s pretty good going in the circumstances, and despite some very obvious difficulties arising whilst recording in lock-down,  Cooler Returns has the bright and breezy air of a band who know they’re on the up. Adding bar-house piano, vintage keys and cheerfully wheezing harmonica to the mix, Cooler Returns finds the band broadening their palette and filling out their sound, so that it begins to reflect what you might call the canon of brainy, North American, white boy rock. There’s the preppy, sweet storytelling of early Simon & Garfunkel, the clattering, speedfreak verbiage of 60’s Dylan and the melancholy and mirth of Ben Folds Five.

Having said that, the spectre of Malkmus and Co still looms large, especially in the cryptic snark of the lyrics, which are at times a car crash of in-jokes, bizarre obsessions (Robin Hood, undercover cops) and small town conspiracy theories. On initial listens to this album you may find the songs impenetrable and now more than ever when we have been looking to music to provide wisdom and succour, lyrics can be so important. However, this album acts as a form of decompression as the tunes quickly worm their way into your subconscious and as the words slowly catch your ear you find yourself in a sort of cheery, slacker Zen-state.

Please don’t put your lives in the hands of this rock ‘n’ roll band, but give them a chance and they may transport you to a more care-free place, in my case to the 1990’s of my mid-twenties, where the shirts were plaid, the rent was cheap and my biggest worries were of the romantic variety.

When you can parse meanings in the lyrics they are often describing lives on the brink of either daunting possibility or hampered by dumbass immaturity, just like any young hero. On the brilliant ‘Nashville Wedding’ the protagonist hilariously describes his reaction to being invited to his exes wedding “I’m tearing up this invitation to come and join you on the shoreline/Come and meet your new relations/Take it easy man on the white wine“. Outrageously copping the melody from ‘Maggie May’ at points it swings through a myriad of hooks and moods as the song lurches from thoughts of hiding out to avoid the whole thing and wreaking havoc. It takes an even weirder turn when it appears that Kiwi Jr may be playing the wedding “I wanna hold the minister’s hand, strangle the jangle pop band“. Yes, despite the upbeat nature of the music there is occasionally obvious darkness in the lyrics – ‘Dodger’ which sounds like Grandaddy playing The Velvet Underground may be about a serial killer, and the events of last year have left their mark as during a New Year’s Eve party in one song they loudly cry “2021 tattooed on my ass!”

You don’t necessarily need to be a decoder of lyrics to fully enjoy this album as it is chock full of mood lifting melodies, swinging harmonies and assured, classic “jangle pop” playing. Witness ‘Domino’ a garage rock 4/4 stomp of unstoppable force and fuzz tone guitar which will have you flipping your wig and joining in the glorious backing vocals. It is just over two minutes of pure heaven. Similarly, closing tune ‘Waiting in Line’ displays the bands mastery of the form, with sunny, swirling keys, Byrds-ian guitar flourishes and more rabble rousing vocals. Moments like these show why SubPop signed Kiwi J. as they seem to be able to produce timeless, memorable, beautifully crafted pop songs almost at will.