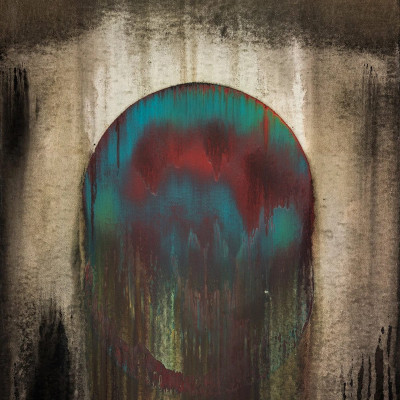 If there was any justice in the world, Palm Reader would be a far bigger band than they are. I first came across them in a little venue in Manchester around the time of their debut release Beside the Ones We Love in 2015. The band was heavy, dynamic and seemed to genuinely enjoy what they were doing. I’ve seen them a few times since and to be fair they just get better. The band has developed over a few albums, they’ve kept the hardcore edge, the chaotic stage show and the inherent sense of musicality but not discarded their roots just developed and grown. Despite a somewhat challenging year and some record label issues, they released Sleepless in 2020

The new album is not so much a sea change but rather a development, their 2018 release Braille, which arguably got them attention from the wider world of heavy music, had a certain atmospheric nature and they really started to explore dynamics. Sleepless develops on this and adds more dynamic and melody. Josh Mckeown,’s(vocals) harsh rasp is instantly recognisable on the opening track ‘Hold/Release’, swirling guitars and punchy drums tempered with some melody. The song peaks and troughs with elements of the raw, heaviness of previous albums with some atmospherics. ‘Stay Down’ is heavier, with a real punchy rhythm section and some real thick heavy riffs intertwined with some fast, swirling guitar and a stunning huge chorus. Josh’s vocals are searing as usual but the melody comes across and works well as a counterpoint to the heaviness.

The next few tracks explore this developing side of the band, ‘Ending Cycle’ and ‘Willow’ both start far more minimal and pared-back but develop into noisy, melodic crescendos. ‘Willow’ has some nice guitar flourishes that add some colour. There is a lot going on in this album but it’s done with care and coherence. On ‘A Bird And It’s Feathers’ the usual vocal rasp is swapped to a far deeper and melancholic one. The track builds patiently before being fading to a slightly distorted bass and minimalist guitars it teases a huge crescendo but never quite gets there but instead swirls into a swarm of vocal harmonies and rather brilliantly ending with a little horn part. A great track and perfectly illustrates where this band is going.

‘False Thirst’ is a complete departure from what we’ve heard so far, with softer vocals, piano-heavy with some distant-sounding drums. I can’t quite pinpoint what it sounds like. ‘Brink’ at first listen is a little underwhelming but after a few listens it reveals a chaotic maelstrom of noise, it is a very dense track, some harsh guitars cut through the morass with some old fashioned riffs. ‘A Love That Tethers’ is similar in feel, a more dark melancholic side of the band is revealed. Both of these tracks are allowed to breathe and develop, rather than being full-on from step one. Contrast either of these tracks to ‘I Watch the Fire Chase my Tongue’ from Beside the Ones We Love and it is obvious where the band has come from and where they are going.

The album ends with ‘Both Ends of the Rope’ another brooding and melancholic track. The bass and guitars gell wonderfully and the solo guitar and keyboard is again a brilliant flourish.

It’s a finely crafted, frankly, very good album. It shows a band on a journey and not afraid to experiment. There is everything from heavy as hell, thick riffs to melodic piano and brass. There is a lot going on and it improves with a few listens. There are some anthemic sounding bits that will transfer well to a live setting. I truly hope there are some music venues to go back to hear this music live. Palm Reader are sometimes referred to as the UK’s answer to The Dillinger Escape Plan but Sleepless shows them carve their own furrow in something unique, interesting and exciting.