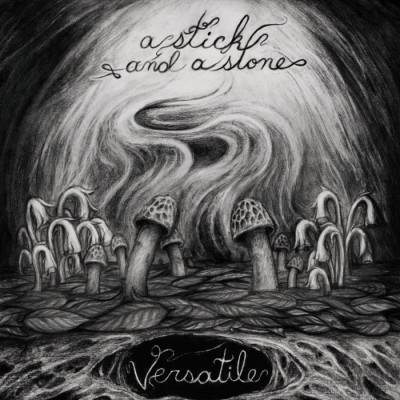 Versatile by A Stick and A Stone

The howling of wolves. The mordant sawing of a cello. The creaking of a tree in the wind. The pebble-in-a-pond resonance of a marimba. In this new era of rock music where atmosphere and attitude counts for as much as amplification and aggression, a stick and a stone have found a home. Formed in 2007 by vocalist/composer Elliott Miskovicz and now featuring regular collaborators Billy Ray Boyer (Aradia), Stella Peach (Sweeping Exits), Myles Donovan (Disemballerina), and Sei Harris (Mind Parade) a stick and a stone make avant-garde, doom folk, topped with Miskovicz choral-style, poised, soft yet tremulously raw vocals.

Likened to artists such as Emma Ruth Rundle and Chelsea Wolfe, his previous three albums have fit slightly more traditionally into the doom folk genre, with funeral march paced crashing percussion, sporadic heavy bass and an underlying feedback drone for depth. New album, Versatile was recorded in remote forest hideouts after Miskovicz relocated from urban Philadelphia and moved off-grid to the woods of Oregon, a move made necessary as urban living was exacerbating numerous health issues. The press release for this record states “Although rural life was not always easy as a transgender gay male, his songwriting there evolved from a tool for coping with chaos into an expression of reverence for the ecosystems surrounding him.”

This reconnecting with nature has seen a stick and a stone become more organic, less electric, as if a purge was necessary. Yes, there is tape manipulation and standard mixing and home recording methods at work, but Versatile is full of field recordings, found sounds of wind and water, birds and unknown creatures eerily calling at dawn. The lyrics are full of mystery and wonder, as well as, perhaps unsurprisingly, celebrations of freedom and escape. Where this album occasionally falls down is that without beats, and with it’s uniform, glacier-like pace, the songs have to distinguish themselves through strong melodies and unusual, ear-catching instrumentation or samples, and not all are readily able to do so. However, when all the elements do come together some striking results are achieved.

Advanced single ‘Horsetail’ has strings that operate part like drone, part like classical backing and lifts a song of seeming ancient beauty, with Miscowicz repeating the line “how to survive without running away” in the chorus. What sounds like rain lashes down in the closing moments, matching the air of exposed, bleak contemplation. ‘Timelapse’ is another highlight, built upon a jauntier than usual marimba beat which becomes hypnotic as Miscovicz describes the slowing of his life and the time taken to really study nature.

‘Hunter’ makes a bold grab for the rock fans’ attention with it’s howling wolves, acting as accompaniment in a frosty midnight chorus, but actually the song is quite slight and is over before the atmosphere has really settled in. Better is ‘Heart of a Whale’, which has a cornucopia of wild sounds as backing, what sounds like wolves, insects, birds, maybe even frogs, seething, teeming with life through a song of celebration “life has been transplanted/make way for expansion”. Utterly beguiling.

The list of musical instruments employed on this album, many of which I am unfamiliar with, is large and impressive – Miskovicz alone is credited as having played pump organ, piano, marimba, kalimba, classical guitar, wood flute, percussive branches (!), bass drum – not to mention found sound excavation. As a consequence, so much of what you hear is strange and wondrous, or even spooky, as on the scratchy, black metal style vocalisations (I think) that close out ‘Meridians’. These small nods to modern rock music are few and far between though, so don’t expect it to sit cosily next to your Candlemass records. This music is strange, sometimes difficult. It’s thrills are small, the songs are little secrets, slowly revealed.