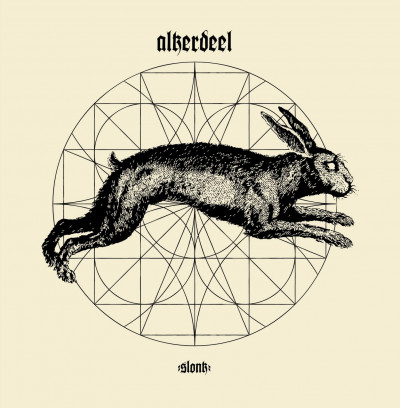 Alkerdeel are a band with which I have had a long held fascination. They have been, for want of a better phrase, ‘in gestation’ for as long as I’ve known their name – and that has been from around 2009, twelve years ago. Their previous releases have all been stunning, don’t misunderstand that phrase… But as a listener, I always felt there was more to come, as if every release was a rung to a ladder, and one day we – with them – would peer over the top.

After a number of releases featuring the epic, long-form opus ‘Luizig’, they finally released their debut album, a three song grim milestone, De Speenzalvinge, in 2010, featuring the aforementioned track as its’ closing dirge. It was an impressive debut, and certainly hinted strongly that greater things were to come. Morinde, released two years later, was the first time I sat up and took more notice – as did, it seemed, the rest of the wider scene. The four-track affair was replete with towering sludge mixed with noise and rumbling doom (with some pretty ace, iconic artwork). It was recorded live and it felt raw, caustic, but still as if the members were clawing away, honing the craft, breaking fingernails to rasp open a door to future experimentation and success.

A collaborative track with Gnaw Their Tongues was released in 2014 (Dyodyo Asema) – putting them on the map with those who are devotees to Maurice De Jong’s bristling and bludgeoning blackened noise. Another two years later, Alkerdeel produce Lede, their third record with a trio of tracks that gnashed and screeched out of the speakers and injected an original dose of black metal into their genetic makeup, that had only been hinted at before. It was an exciting evolution, and despite strong reviews, I felt it largely overlooked in 2016 and since. Revisit it, if you become fond of their new LP.

And so, we come to Slonk. We find ourselves just shy of five years on from the official release of Lede, the most considerable gap between releases in Alkerdeel’s history. Although I’m sure there may be some more mundane reasons too, it feels entirely right that there has been this significant pause. Lede was a change – perhaps what I would now dub a ‘chrysalis record’ – and Slonk is the conclusion of that pupation, the end result of the maturation process.

You’re never going to get a ten-track album from a band such as Alkerdeel. Slonk weighs in at four tracks, covering thirty-seven minutes.

‘Vier’ opens the ordeal and is the longest track by far, over thirteen furious, sprawling minutes. However, its opening is gorgeous, even restful: lulling the listener into a laconic stupor before flexing its muscles and instantly announcing Alkerdeel’s new, boiled down sound. Here we finally have the balanced, nuanced, crushing median they had always been hinting at – a blurred blend of black-metal, sludge, noise, doom and even a nod to the heavier post-metal of the turn of the millennium, and dare I say it, some influence from grindcore too (certainly the buzzing guitar at certain points, anyway!)

The track had me in raptures from the very first listen and continues to tease new layers of timbre, patina of sound, and subtlety upon frequent revisits. The bass tone sounds sumptuous, good enough to swallow whole, and QW’s writing on the entire record, but this song in particular, is startlingly original for the space between genres they still inhabit. The conclusion of the track picks up the pace just as ‘Vier’ sounded as if it has settled into a recognisable dynamic, with the live recording of the album adding an authenticity and ‘earthiness’ to the overall terroir of this stunning opener and the whole of Slonk.

The shortest track of the LP comes next, in the form of ‘Eirde’. Great things come in small packages, with the track bursting out of the gates, unquestionably rabid and scalding to the eardrum. The tempo of the opener is incredible, with the live recording keeping things brutal, but the sound never becoming muddy. This is a side of Alkerdeel I don’t feel I have ever really experienced – unrelenting blackened grind that despite its unquestionable speed, somehow remains within the sludge metal wheelhouse. That may sound like a paradox or a mixing of terminology that makes little to no sense, but that only pays testament to the achievements the four-piece have managed to conjure on their fourth full-length.

Right, flip the vinyl over…
[Don’t know about you, but I have to do this, even when originally listening digitally…]

‘Zop’ opens with a hail of feedback that makes me long for live gigs, before launching into a similar pace to ‘Eirde’. The guitars here sprawl and crunch with enough verve to suggest an element and influence of thrash. However, there’s enough dissonant tonality, breath-taking drumming and harrowing vocals to edge it continuously back into the black metal arena. Alkerdeel were never laboured in the transitions during their twisting and turning prior songs, but there’s something so effortless and seamless to their songwriting on Slonk. It’s a strange element to pick as a shining highlight of an LP, but this ability to fuse sections together without even the most learnéd, critical ear being able to identify the joint, is exceptional from a compositional point of view. Bravo!

Slonk finishes with ‘Trok’. Its initial flavour is unreservedly black metal, with some truly delicious drumming rattling along under some supreme guitar work. The recording of this record may remain raw (and I don’t think Alkerdeel will – or should – change that), but it captures the band brilliantly. And damn, I’ll write it again: it transports me down to the front of a decent but dedicated crowd in some lovely scuzzy venue, next to a speaker, one ear slightly more blown out than the other, and with Pede wrenching out his bellowed screams and howls of anguish just an arm’s length away.

Alkerdeel’s fourth album is the sum of all that has gone before and is, to my ear, their finest achievement to date. If I were to reflect in a purely subjective, personal way, I do hope LP #5 might incorporate a little more of the sludge/doom aspect of their sound again, but that takes nothing away from the unencumbered enjoyment and revelatory joy I felt at listening to this album. Alkerdeel have arrived – bloomed, evolved, transformed, metamorphosed… Well, well worth those five years of waiting. That said, reserves of patience for the next instalment will be hard to come by on this evidence…