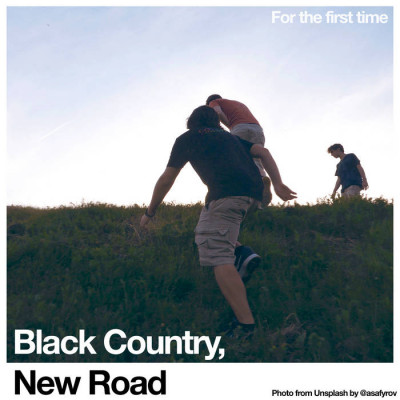 For the first time by Black Country, New Road

It’s always difficult to review the debut record of a band who seem pre-destined for critical acclaim. The Hype Machine™ is installed, booted, and ready to work its alchemical magic.

Limited edition seven-inch records of tracks that feature on this record are already swapping hands on Discogs at eye-watering prices. It’s Rough Trade’s February Record of the Month. The Guardian eulogised over it and have already snuck in an interview with the seven-piece in their Culture pages. No more have I ever seen a band been lifted on high than this, as of late. And no more have I thoroughly agreed with it all and cheered it on.

Black Country, New Road(BC,NR)are the real deal. Effortlessly young and cool, tapping into the sonic zeitgeist and yet still attracting the approving nods of those, like me, who operate in the unknown reaches of experimental music that will never trouble the pages of a broadsheet newspaper.

The band have become known for their extraordinary live gigs – surely the true proving ground for ‘it’ bands, rather than a demo or an album coming out of nowhere. Murmurings started around two years ago of a band barely out of university, barely able to physically occupy the same stage given their numerousness and the size of the venues they were cutting their collective teeth at, who created raucous sets based around written pieces but who loved to improvise. A seven-piece who featured violin and saxophone as a matter of course and who occupied an original space in post-punk, with indie rock sensibility and a penchant for wild digressions into far noisier experimentation.

For the first time is Black Country, New Road’s first full-length and daaaaaamn, it’s good. Ninja Tune won the rush to sign the Cambridgeshire based indie beast and I imagine they are going to make very, very good on that investment. As alluded to previously, the band are destined to be on quite the PR trip for the next few weeks and months and one can already see this ranking highly in end of year lists. Again, not without reason.

Their journey hasn’t been one of consummate ease, despite the constant stream of platitudes now received or indeed my suggestive opening to the review. Before BC,NR there was Nervous Conditions. Largely the same band but with a separate vocalist, that iteration also had buzz around it and an album largely finished (you can hear it if you scour YouTube), before a litany of accusations about the vocalist’s conduct came to light and the band immediately folded. For young musicians this might well have turned their view of moving forward musically so sour that they could have been forgiven for not doing so. However, as garnered through interviews, the group of seven are so close as friends and musicians, that this proved a (happy) impossibility, and so we are gifted with this new, separate band.

The record opens with ‘Instrumental’ which is, err, an instrumental, d’uh. It’s an excellent opener, despite it being sans vocals, immediately showcasing the talents of whole band, a mesmerising piece of intricate instrumental indie mixed with post-rock, energetic European folk and more. From the outset, it feels like an important album.

We then move into a well-known track for those who have followed the band since the outset – ‘Athens, France’. Very soon we are met with guitarist Isaac Wood’s spoken word, semi-sung drawl. His voice fits the music perfectly, and quite frankly, instantly – whether he likes it or not – sounds iconic. Swagger mixed with nervousness; talent merged with anxiety; optimism and boisterousness blended with self-effacing unneeded apology. This is a re-recorded version of ‘Athens, France’ and somehow feels more approachable than the prior offering.

We then segue into ‘Science Fair’, possibly their best known track to a wider audience, at this point. It was a brave first single to put out – it’s a track that arguably blends the most genres out of the entire tracklist. A sense of anomie pervades despite the general subject matter being of impressing and being transfixed by a special someone, all the while as Wood flicks from referencing the band’s name (for not the first or only time), and reeling off a spiralling, stream of consciousness of lyrical content. It’s insistent and claustrophobic, giving a sense of pressure and heaviness, while releasing the sort of irreverence one only feels in cutting edge indie rock. Remarkable.

‘Sunglasses’ will be well known to long-time fans, like ‘Athens, France’ was before. It is unsurprisingly the spine of the record, clocking in just shy of ten minutes. It remains an astonishing song in the band’s repertoire. Whatever they may be saying about already wanting to focus on Album #2, I imagine a lot of fans are still going to be calling out “SUNGLASSES!!!” to the band whenever we can all start piling back into venues. The lyrics on this are just amazing, too. I mean, how can you not love this? Gen-Z wit mixed with depression mixed with post-punk preoccupation. Mental.

Mother is juicing watermelons on the breakfast island
and with frail hands she grips the Nutribullet.”

— Except of lyrics from ‘Sunglasses’

‘Track X’, the shortest song on For the first time, then creeps out of the speakers. For the first few listens I didn’t really get this track at all. However, with repeated listens it slowly unfurls, showcasing its beauty and subtlety. It remains a song that feels like a bridge between ‘Sunglasses’ and the closing track. This doesn’t undercut its quality, but it remains a bit of a mystery why it was chosen as another track previewed on streaming platforms prior to For the first time’s official release.

Black Country, New Road’s debut ends with sixth track ‘Opus’, which proves, much like ‘Instrumental’ to be exactly what it says on the tin. And like ‘Instrumental’ it brings back and incorporates a manic folk aspect to their sound, too. Sort of like if IDLES and Gogol Bordello had a bastard child. The hybridity of the seven-piece never ceases to amaze.

I would put them in the zeitgeist swell of post-punk that is happening right now (IDLES, shame, LICE, Viagra Boys, Protomartyr, Dehd, Porridge Radio and Squid). But they are certainly on the periphery of that sound, despite clearly being up front and centre right now. They are good friends with black midi, sharing stages before and recently (doing a wonderful fundraiser for The Windmill, Brixton), and even referencing them in the lyrics for ‘Track X’, but importantly they also share a similar proclivity for testing their listener, too. ‘Opus’ displays every single one of these traits. It proves a thrilling close to For the first time. Wow. Just wow!

Okay, okay, I’m eulogising. I’m punching in for my time working for The Hype Machine™. Are there any issues with For the first time? Well, unlike many, I’m going to say yes, yes there are, and have my pass for ©Critical Darlings and Join the Bandwagon® thoroughly revoked. Cast out, shall I be…

For the first time is too short. Despite clearly being indebted for part of their multifaceted sound to the legendary Slint (Wood knowingly nods to this on ‘Science Fair’: “I could’ve left the fair with my dignity intact and fled from the stage with the world’s second best Slint tribute act”), they didn’t need to mimic the band’s blueprint for the iconic Spiderland. Six tracks – forty minutes. Even the construction of the timing and rhythm bears an uncanny resemblance. However, the seven-piece are their own act, and it seems to me that they either had the old adage of “forty minutes is the perfect album length” or Ninja Tune batting their eyelashes at the band, hoping the album wouldn’t necessitate a double vinyl package.

Either which way, For the first time could really do with another song or two. It is a weighty LP in terms of emotional heft, passion exhibited throughout and undeniable musicianship and compositional skill. However, it lacks – for me – the metaphorical weight of being an album truly announcing a major act. And the frustration is that BC,NR clearly are that band. More frustratingly, there are at least two or three fan favourite tracks that have not made it onto this record.

The other thing that nags in my mind is the question of what might have been, with slightly different production and somewhat taming the band’s desire to always tweak and rewrite. Quite simply, ‘Sunglasses’ 2.0 is not as good as its previous iteration. There’s a strong case to be made, likewise, for ‘Athens, France’, but let’s focus on the former. The energy that pervades the original version of this ten minute epic, is extremely tempered – some may say all but lost – on the album edition. Lyrics which felt challenging and in-your-face have been replaced with something altogether tamer (“And fuck me like you mean it this time, Isaac!” replaced with “And burn what’s left of all the cards you kept”). It can’t be due to concerns about expletives as ‘Track X’ uses plenty afterwards.

The stomp of the close is still there but the saxophone doesn’t jump as high in the mix and is played with more control that the live flair and screech of before; and where the spoken word, semi-barked, semi-mumbled vocals were (and which are still employed so casually yet effectively so often elsewhere on For the first time) we receive a semi-sung rendition which lacks the punch, bravura and scorn delivered previously. Less tortured, less intense – and therefore less vital. It also features rewritten drums, that while adding complexity and patination of sound, also delivers less bang for its’ buck.

Joking aside, the debut LP from Black Country, New Road is astonishingly good. For the first time, despite my niggles, does announce a very special band to the wider music scene. It sounds like the band have written their sophomore effort and even part of number three, so let’s hope we have a strong few years of this brilliant young band taking over the world. Their recorded output will be exciting to track, but I don’t know about you, but I really want to witness these tracks and more live as soon as is possible. There they live and they shift naturally and what magic may come from watching it up close. It’s Black Country out there.