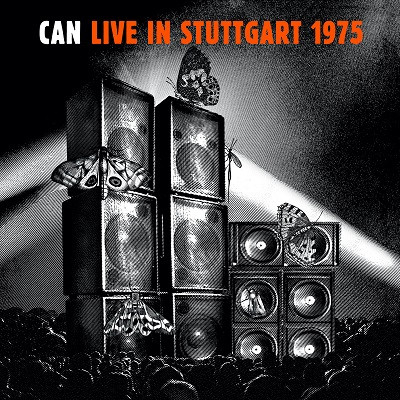 So how many licks does it take to get to the Tootsie Roll center of a Tootsie Pop? If you answered three, well you are probably wrong on that mathematical question when it comes to that delicious, chewy chocolate candy. But when it comes to CAN, they can take a big giant crunch out of that Tootsie Pop with some heavy spaced out grooves that will knock the socks right out of your pants!

This 2-CD set consists of one of the first in a series of CAN’s live recordings in 1975 at the Gustav-Siegle-Haus in Stuttgart, Germany. Around that time frame, the band released their sixth studio album, Landed in the fall of that year. So this rare live recording, makes you want to close your eyes and picture yourself at the venue showing support for Michael Karoli, Holger Czukay, Irmin Schmidt, and Jaki Liebezeit for one evening that can fill the venue with some uncharted results!

There are some of these incredible moments throughout the recording that are like a nuclear bomb ready to explode at any second. And believe me, this Stuttgart recording is the ultimate trip. Both ‘Zwei’ and ‘Vier’ are continuations of the improvisations from ‘Oh Yeah’ from their Tago Mago period between 10 and 14 minutes. You can feel the engines running for Karoli’s clean and heavy polyphonic grooves by giving Jaki and Holger and chance to join in.

Once the levels build up, Irmin’s keyboards lets out these eerie vibrations by having this Kubrick-esque film scenery before Karoli snarls down the rabbit hole to follow Schmidt’s passageway while Jaki leads in some tidal waving effect on the drums. Czukay leads the team upwards as the fires burn rapidly to increase temperature levels at a higher rate for Michael coming in with these bluesy sun-rising effects. The notes are reaching higher and higher when his fingers hit the smallest and bigger frets to get audiences on their feet and dance to the music until dawn. ‘Eins’ is Irmin’s approach to the swirling Egyptian gods on his Farisfa Organ by walking inside the pyramids and the mystery that is hidden underneath. As Holger’s bass which sounds like a heartbeat and a clock-ticking rapidly, in comes the James Brown midsections of the funk that Michael does by getting the crowd on board to CAN’s answer to the Soul Train with a chugging vibration. Most of it comes from Ash Ra Tempel’s Manuel Gottsching and the Chicken Scratch styles of Jimmy Nolen.

Clocking in at 35 minutes, ‘Drei’ is where CAN really gets the cooking levels up and running! Holger himself keeps the pulse up as Jaki and Irmin punches through those cat-and-mouse chases in their answer of a swinging improvisation with an action-packed scenery from the Giallo films. And then the last 13 minutes is where it becomes an intense roller-coaster ride from hell. You never know when the ride is going to stop after your second or third spin by going into this Velvet Underground assault by throttling down very hard with a punch in the gut routine throughout a hay-wiring scenario that Karoli and Liebezeit do. At the end of ‘Funf’, it is a mad, insane, and crazy finale.

Schmidt lets it all out for this droning noise and swirling effects as Jaki is heating up the stoves with some heavy spices! Militant, eruptive, climatic, and with some final battle sequences for the CAN train going in at full maximum speed, it is a free-for-all ending in the form of ‘Flight of the Bumblebee’ meets ‘Toccata and Fugue in D minor’ with a holy shit in a fucking handbag climax!

While we dig through our Krautrock collection and digging into our CAN albums playing at maximum volume, Live in Stuttgart 1975 is quite the ride. And while The Lost Tapes was their compilation album of unearthed material released nearly 10 years ago was almost an open door for what the band were doing during the late ’60s and into the ‘70s, this live recording has finally kicked the door down to see what the archives of unheard live material will have in store for us.