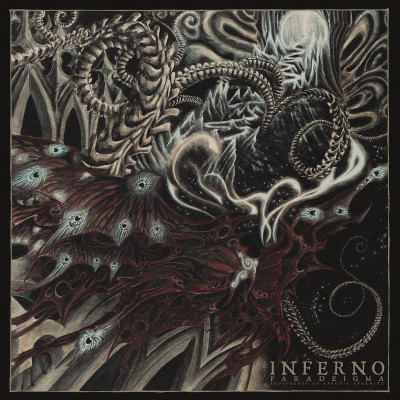 The evolution of Czechia’s sons of darkness, Inferno, is one to marvel at and one of the most significant in black metal history, yet the band haven’t strayed all the way from their original roots. The already wonderfully diverse world of black metal can push boundaries and broaden scope, challenging what a band is musically capable of, so has seen many transcend to another way of writing, recording and even thinking. Inferno’s horizons have gradually become more nuanced over the years with 2013’s Omniabsence Filled by His Greatness being the start of their eventual paradigm shift into more occult and esoteric music and exploring the ethereal reaches of divination.

Gnosis Kardias (Of Transcension and Involution) still had stark contrast to Omniabsence Filled by His Greatness and more specifically their entire back catalogue, and whilst new album Paradeigma (Phosphenes of Aphotic Eternity) is a more sound expressive expansion to Gnosis Kardias, it is even more removed from their earlier works. Inferno’s sound has progressed from traditional raw black metal into a more multi-dimensional beast with their creative output at its prime.

Offering six new malign entities of crawling, immersive blackened metal with a key focus on atmosphere, Paradeigma (Phosphenes of Aphotic Eternity) delves further into experimenting with sound textures and moves the band deeper into the world of unorthodox and avant-garde black metal. Opening piece ‘The Wailing Horizon’ hits you immediately with fiery riffs and weighty, cymbal-clashing blastbeats and smothers you in an impenetrable, suffocating wall of swirling atmospheres and chaotic auras. It’s oppressive, consuming and compacted madness and ultimately a terrifying glimpse into this new masterpiece.

Something to point out here is that Adramelech’s vocals are less prominent than on Gnosis Kardias and are devoured in the layers of dense and claustrophobic music, as if screaming from unfathomable depths, so are at most times inaudible and chant-like, which seems to play its part in what Inferno have set out to achieve on Paradeigma, developing a rich soundscape-based piece of dark audial art.

‘Descent into Hell of the Future’ burns slowly to a blazing, gaping hellmouth of devastating black metal, biding its time, building on intricate drum patterns, sinister synths and thick ambience lurking in the background before a short, teasing round of skin-beating fury is unleashed. War drums bring us to a dramatic climax of nearly two blissful minutes of quaking blastbeats and epic, seething tremolos that fade out to its conclusion. A future template for all caustic and blackened ragers.

The purely atmospheric ‘Phosphenes’ is the albums most interesting track and one that is rich with sound textures, smokey, evocative ambience and intermittent plaintive cries from a haunting presence. Booming, almost tribal-like drum patterns pound like heartbeats with such effective and catchy results you find yourself nodding your head to the beat.

Ultimately the music is darkly hypnotic and cinematic, dragging you into a churning maelstrom of thick, gnawing voids and atmosphere-heavy metal. It is as suffocating as its cover art. The most consuming of these movements is final track ‘Stars Within and Stars Without Projected into the Matrix of Time’, a mouthful of a title that offers a bounty of musical greatness, from blistering, frenzied blastbeats and bellowing vocals to slower, angular post-black sections and warped, haunting layers of sound. These many shades of expression combine to tell a grandiose story of occult darkness and ends the album in the most perfect way possible… drenched in darkness.

Paradeigma (Phosphenes of Aphotic Eternity) is a single monstrous and mesmeric cacophony of darkness and light, of punishing, spiteful riffs and bleak, dreaded ambience that, for full effect, should be heard in one sitting. It’s oppressive and cold and brimming with mysticism, dissonance and abyssal atonality. It’s an engrossing listen, albeit an unsettling one, yet one of triumph and satisfaction. Whilst I believe Gnosis Kardias is the band’s magnum opus, Paradeigma is a stunning and bold album from a band who have continued to strive to reach new heights of progression with each release.