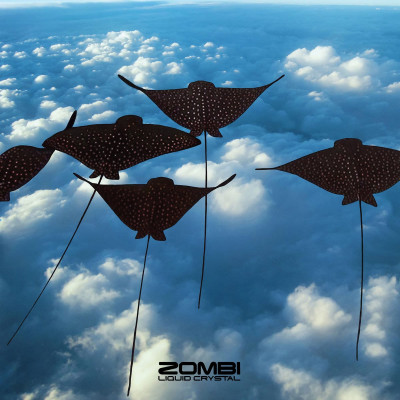 The release of 2020 was a telling moment for Pittsburgh’s proggiest duo, but not in the most expected of ways. It didn’t seek to reinvent their synthesised retro-futurism, it didn’t go in especially minimalist or poppy directions – in a lot of ways, it sounded exactly like a Zombi album should sound. What was different is that it sounded meaner; the riffs were taut and muscular, Anthony Paterra’s drumming had an immense physicality and the electronic textures had the cold malevolence of a Terminator. It was all so much that now there is Liquid Crystal, an EP that is equal parts continuation, soulmate and prologue.

Opening with ‘Mangler’, a wedge of dark proto-kraut chuggery that functions like a moody prologue to the EP as a whole and the signs are already there that these songs will be more in the muscular vein of 2020 than their earlier output. Paterra dominates the sound thoroughly, his drumming precise and loaded with tense energy, and when the intensity does begin to increase it’s largely carried on the back of his urgency, his tempo shifts and on the violence of his strikes. ‘Chant’, in contrast, is a more balanced piece, not just in its construction, with its ominous bass-heavy riff and flightier counter-melodies giving more body and groove, but also in the contributions of both players. Paterra remains a strong, sometimes jarring, presence but Steve Moore’s deft handling of the core melody, as well as both the upper and lower tonal range of the song, gives him equal say in how it flows, grows and evolves, constantly heaping on the tension and never quite giving the listener room for comfort.

If there’s one song that feels like a throwback in the best possible way, it’s the title track. Moore’s synths are undiluted John Carpenter magic, simultaneously dreamy and dripping with foreboding and tension, and when Moore’s guitar solo comes screaming through like a majestic eagle with a VHS copy of Top Gun gripped firmly in its talons, there isn’t a hint of cheese or knowing irony. Rather, it’s strident and powerful stuff, an appropriate climax to ‘Liquid Crystal’s sinister energy. If ‘Mangler’ was the prologue to this dark tale, then ‘Turning Points’ is the dramatic conclusion. Like its counterpart, it’s largely built on an ascending scale that draws ever upwards before resetting, as well as on Paterra keeping it slow, hard and heavy; snare hits rattle out like rifle fire while the occasional roll of toms helps to bridge, and to delineate, the repetitions. The elements are pared back compared to most of Zombi’s past output, yet there’s something monolithic going on, and not just because of its considerable length. It’s epic in the most literal of senses, and in the right mood it flies by eerily quickly.

In all honesty, Liquid Crystal could, and maybe should, have ended here. It’s the most fitting end point for such a downbeat suite, and ‘Black Forest’, well, isn’t, but it’s hard to dislike it and its resolutely funky energy. An excess of proggy showmanship from Moore and Paterra, a swaggering Italo-disco beat and a massive dose of good-time energy makes it an instant winner, and it’s blatantly obvious why it was the first taste of this release that the public were given. There’s such confidence here that it could motivate the laziest of lockdown layabouts to take on the world, and whether its inclusion here is as a defiant final burst of energy or just as a treat that was too good to keep hidden, it remains a fantastic gem that probably could have carried this release on its own.

Thankfully, it didn’t have to, as these songs stand together as an impressive work. They don’t quite have the cohesion or memorability as a typical Zombi full-length, but there’s enough substance that Liquid Crystal goes far beyond the status of “something extra for the fans” and firmly into “if you like your music as dark, hypnotic and mesmerising as that monolith from 2001: A Space Odyssey, you’ll want to check this out” territory.