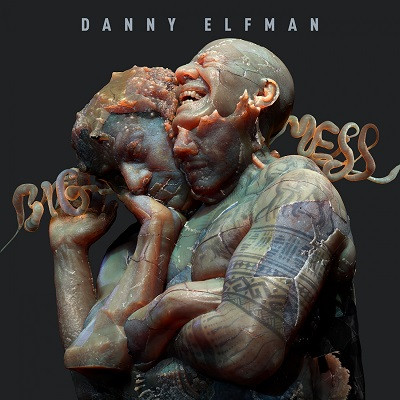 It’s been 37 years since Danny Elfman had made another album after the release of So-Lo from the MCA label. He has been a very busy man since composing film music in 1985. He had worked with directors such as Sam Raimi, Warren Beatty, Gus Van Sant, Richard Elfman’s Forbidden Zone with Oingo Boingo, and his partner in crime, Tim Burton. It shows that he is more than just a rock artist by going beyond the Ska and Punk influences, but following in Bernard Herrmann’s footsteps.

But now in 2021 after everything came to a screeching halt last year in March, Elfman has decided to bring his snarling and rocking approach once more by coming full circle during Quarantine. Big Mess is Danny’s return to being weird again. Similar to David Bowie’s 1995 semi-comeback release with Outside, Big Mess is a groundbreaking nuclear bomb that is ready to explode at any second.

Tackling subject issues such as fascism and a city gone wrong, crossing over between the Orwellian nightmare and the climatic finale in Nathanael West’s novel The Day of the Locust, it becomes an eye-opening experience of everything going to hell in a handbasket. From the moment he released ‘Happy’ during Halloween 2020, it was quite an unexpected return to see Danny going back to his post-punk roots once more.

It showed that while the intense synth lines, dooming string sections, and blaring guitars, Elfman has that electrical spark of an anti-pop song. It was originally intended for his return at Coachella before the pandemic hit. But it was quite a surprise to see him get back on the railways once more.

‘Dance With The Lemurs’ is tipping his hat to David Bowie’s Berlin trilogy from 1977 to 1979. With an acoustic revving sound, we walk into the deserted streets of Paris with an orchestral vibe of a city that is filled with secrets and lies as both ‘Just a Human’ and ‘Kick Me’ are Danny’s return to his Punk roots in the late ‘70s/early ‘80s. Thanks to Josh Freese’s surf and tidal waving drumming textures, he crosses over between the sounds of Black Sabbath and The Ramones. Showing that Danny not only wants to sniff some glue, but with a heavier and brutalized attitude that will kick you in the stomach with a hardcore punch!

‘Sorry’, which opens the album, channels some King Crimson vibes. Temperature levels are increasing very high from the female choir going back and forth between each other. The beast itself is ready to raise some hell with its unleashing effects as the fires are bursting for this roaring guitar and drum sections. This gives Danny enough ammunition by shooting some of the enemies that derailed him.

‘We Belong’ is a post-apocalyptic nightmare after the Burning of Los Angeles with bells tolling from a distance. Danny is giving this eulogy of a dooming city in the styles of Van der Graaf Generator’s Peter Hammill and Leonard Cohen while the arrangements on this track have some Jean-Claude Vannier textures from Histoire de Melody Nelson. It makes it perfect for the heavy rain to be pouring down on the massive fires that are put away for good.

‘Love In The Time Of COVID’ showcases Elfman’s surreal sense of humor channeling Raymond Scott’s ‘Powerhouse’ midsection. It shows that he hasn’t forgotten his time with The Mystic Knights of the Oingo Boingo and honoring his older brother. While it goes through a paranoia effect of being in your house or apartment for way too long during quarantine, there comes a moment where everything comes to a boiling point.

Speaking of Oingo Boingo, he revisits ‘Insects’ from the Nothing to Fear album in 1982. From its pre-Primus ska rocker to the THRAK-era with some Trent Reznor approaches that makes it very volcanic.

Stu Brooks’ Bass sets the increase level on ‘Better Times’ and ‘Native Intelligence’. This is where the mob’s temperature goes off the charts. Elfman sets the scenery for West’s vision of the topsy-turvy momentum is reaching to take over this tactic theme for Survival of the Fittest by destroying the pleasure dome and throwing out the corruptive side of the people who run it by burning it to the ground.

On ‘Choose Your Side’ has this dystopian nightmare with a steampunk vibration of the trains pulling in and out. Danny is asking the listener some questions on what has happened to this operatic industrial boom as ‘Get Over It’ is his return to the character of Satan from Richard’s 1982 cult classic. But this version of Satan is a whole lot different. It is brutal, vicious, and evil. The guitars are going off the charts with its schizophrenic vibes and once the voices inside your head are telling you the damages they have done to their loved ones is coming back to haunt them really hard.

Big Mess is the album that we finally needed for 2021 so far. And for Danny, this is a return to have one last shot of another rock album brought to life. I’ve mentioned earlier this is Elfman’s alternate score to Nathanael West’s The Day of the Locust. And it is a welcoming hand shake for him to be back in the Forbidden Zone once again!