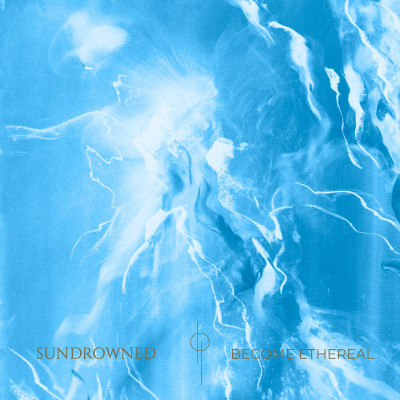 Hailing from Haugesund in Norway, Sundrowned are an emerging light in the pensive world of post-black metal. With one short slab of atmospheric post beauty to their name, 2019s EP I, Sundrowned already have a minor buzz about them.

A staggeringly small amount of information is available about the Norwegians and it was a task and a half to even find anything about them. Soundwise Sundrowned sit snugly between the dreaminess of post-rock band Rosetta and the harsher metal of Deafheaven, creating a layered and spacey world with room for moments of raucous outbursts. Debut full-length Become Ethereal sees Sundrowned exploring the depths of one’s soul in search of enlightenment.

The emotive swell of ‘Babel’ begins the album with peaceful, shimmering soundscapes of ambience and lamenting, pained strings reaching through the cloudy radiance. The sudden weight of the music cuts through the nuanced atmosphere, which resounds throughout this stunning intro, and brings the song to life with clashing cymbals, dissonant guitar twangs and stomping drum strikes. The band play mid-paced almost-blackgaze with blastbeats never quite reaching ‘full-throttle’, which acts in its favour in Sundrowned’s case. The galloping march of drum hits shine alongside angular, wailing strings, sending your ears into post-black euphoria.

The entire album floats blissfully through weightless ease and gleaming audial brightness as each song captures another strikingly beautiful glare from this multifaceted diamond. ‘La Tristesse Durera Toujours’ stands as a perfect example of Sundrowned’s talent and has the band drift through a melodious assortment of exquisite and luminescent sound textures as serene strings levitate above hard-hitting drum patterns. ‘Monarch’, an improved re-recording of a track featured on I, tears through the emotive purge of blackgaze, first holding your hand through a heart-wrenching dreamscape of stunning guitar work and eventually thrusting you into a storm of bassy blastbeats and soaring riffs. ‘Monarch’ is Sundrowned at their best and closes with a dazzling duet of blastbeats and hooky post-black ecstasy.

Become Ethereal is post-black metal perfection, where the harshness of pain contrasts beautifully with the joy of catharsis. In one riff you can experience sorrow as well as elation, whisked away on dreamy chords or drowned in melancholy. Vocalist Jone Amundsen Piscopo’s dark and commanding voice complements the sheer beauty of the music, with just the right amount of tortured strain to fight through torment and enough power to lead the already progressive and awe-inspiring music to its zenith.

Become Ethereal is a debut to remember and one that’s filled with passion and hope. Listening to this album transcends your soul to a better place and lets you forget your troubles as they just float away with each beauteous and carefully thought-out note, and by the time the reflective and almost triumphant outro to ‘O Dom Da Fé’ plays out you will be fixed. One can only dream of what’s to come from the Norwegians. But we’ll leave the dreaming to Sundrowned.