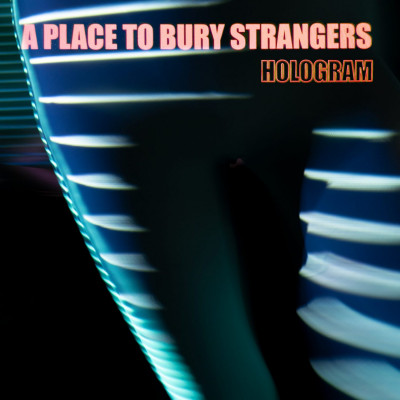 Hologram by A Place to Bury Strangers

From the first time I heard A Place To Bury Strangers I thought there was something unique and visceral about their sound. It’s as enigmatic as trying to label their musical genre. Wikipedia takes the safe route and just lists a bunch of options: Noise rock, post-punk, revival, shoegaze, experimental rock, psychedelic rock, space rock…take your pick. At some point across their musical catalogue, each one fits. The band has gone through many line-up changes and this album reflects yet another.

The band’s constant has always been lead singer/guitarist Oliver Ackermann and his innovative and provocative guitar arrangements. APTBS has always paired Oliver’s dry unassuming lyrical delivery with a massive sonic guitar assault that has caused some writers to label the band as New York City’s “loudest band” – which is clearly saying something.

The new lineup adds Oliver’s childhood friend John Fedowitz on bass and Sandra Fedowitz on drums. Sandra is from Ceremony East Coast, so musically it is a really solid fit. The new additions hit the ground running on the new EP entitled Hologram. I don’t think many fans should be disappointing with this release – it is full of the jarring noise, bombastic melodies and driving tempos that you would expect from an APTBS release. The new trio offers us five new tracks to ponder, and each one is a screaming little monster capable of varying levels of aural annihilation.

‘I Might Have’ is an instant scorcher. Within a few bars of the intro, you know the APTBS avalanche of sound is about to thunder down your speaker wire. And it does. The track hits over and over with layers of sonic abuse, only to fall back, redouble and hit again. An unrelenting and muscular track that would probably vaporize flesh live. APTBS use Hologram to showcase more than their well-proven aural pugnacity. The track ‘End of the Night’ is a slow builder that gradually builds its great groove. It allows each of the trio’s sounds to breathe in the mix with some clever breakdowns that make the loud/soft moments contrast in a very palpable manner. Ackermann’s guitar is a dizzy arrangement of scratchy syncopated throbbings. The drumming is solid and straightforward, grounding the track as it marches forward to its wash-out ending.

When listening to such sonic fury, a slower tempo, a palate-cleansing song is often a welcome break, if it is done right. APTBS offers ‘I Need You’ to fill this void. The song gives Fedowitz a chance to shine as his bouncy bassline is very pronounced in the mix and the guitar is used to colour and adds texture to the arrangement. It appears Oliver attempts to keep the sonic demons constrained more to the background for parts of the song. The lyrics, like most on the EP are very self-reflective. “Don’t wanna get up/ Don’t wanna back down/ I’ve falling apart/ And you’re not around/ Those reasons to live/ Are now foreign to me/ So I stay out all night/ And I don’t get to sleep/ It’s true/Oh it’s true/ I need you…” My take on the message from Hologram seems to be: get back up when The World knocks you down. The short and quirky ‘Playing the Part’ may be as close to a ‘rock song’ as APTBS can get. It evokes early Cure to my mind with another strong bassline and the plucky high-tone guitar rhythms. Again, the trio allows each instrument a moment in the spotlight, as the sonic dissonance is largely absent from the track.

I was disappointed when Hologram ended. I was left wanting to hear more. Where else would the musical trio veer their experimental soundscapes? Hologram adds five solid tracks to APTBS weaponized sonic noise arsenal. The EP demonstrates wonderful creativity and diverse, highly engaging material. APTBS impress once again.