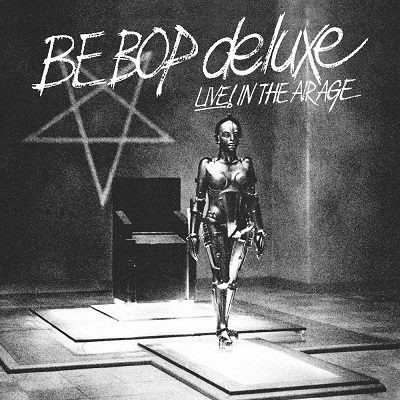 Live! In The Air Age by Be-Bop Deluxe

Orson Welles once said that “The cinema has no boundary; it is a ribbon of dream.” When you think back at some of the classic films during that time frame of science fiction, you think of not just the Star Wars trilogy, but from the realms of Alien, Heavy Metal, Blade Runner, The Man Who Fell to Earth, Metropolis, and Annihilation. However, when it comes to a band like Be-Bop Deluxe, they would take the genres of art, glam, new wave, and progressive music to a whole new level that they proved listeners that they aren’t just your simple glam rock band.

That and this incredible 15-CD/1-DVD set consisting the bands live release, Live! In the Air Age. Originally released on the Harvest label and reissued by Esoteric Recordings, it was one of the band’s successful releases which peaked at number 10 in the UK charts. During that time, they embarked on a series of UK dates from February to March of 1977 while promoting their fourth studio album Modern Music released on September 3rd, 1976.

1977 was a very busy year for Be-Bop Deluxe having this spiritual vibration during the UK tour. It was an audio-visual extravaganza which featured excerpt from Fritz Lang’s silent 1927 magnum opus, Metropolis. One of the first shows to be recorded was at De Montfort Hall in Leicester on February 12th, then two nights in Leeds at the Grand Theatre, which was a homecoming for Bill Nelson between the 13th and 14th that same year.

But then, everything came to a postponing halt. While the band were driving to their next gig in Bristol on February 15th, Bill and John Leckie got involved in a car accident. And so they were hospitalised at Huddersfield Infirmary. They recovered from their injuries, but after what had happened, they had to postpone the gigs until the end of March.

With the gigs rescheduled, they did two nights at London’s Hammersmith Odeon on March 25th and 26th, Bristol’s Colston Hall on March 27th, and Bournemouth’s Winter Gardens on March 28th. Listening to this incredible box set, you can imagine yourself going back in time being at each gig for Be-Bop’s UK tour and lending support to see how they’ve were doing so damn well, they got audiences on their feet.

For Stephen W. Tayler, who had done the remixes for the previous Be-Bop catalog for Esoteric, it took him from December 2020 to February 2021 going through each of the surviving master tapes for the shows done for the UK tour. But it is a trip down memory lane to showcase Be-Bop Deluxe’s improvisational side. There are some incredible moments from the live recordings, you can tell that Bill, Charlie, Andrew, and Simon are having a ball. And the audience are part of that invitation to be a part of that band’s journey.

You have the crowd clapping and singing along with Bill’s participation on ‘Terminal Street’ from those performances as Simon pounds the drums to get the blood flowing with some mellowing vibrations from Clark’s soulful keyboard approach and Fox’s jazz-like stop-and-go sections on his bass. Bill is like a conductor giving not just giving his bandmates a helping hand, but helping the audience with support also.

At times it sounds like the finale of Head East’s ‘Never Been Any Reason’ going through the multiple times from those shows including the ones from Leicester, Leeds, and Hammersmith, but songs like the fast-driven textures on ‘Fair Exchange’, ‘Ships in the Night’, and the mellowing bluesy gospel-like structures throughout ‘Adventures of a Yorkshire Landscape’, gives you some detail that this was the right at the peak of Be-Bop’s grandiose during those gigs.

Andrew’s keyboards really gets you going. Listen to the Leeds and Hammersmith versions of ‘Swansong’, he’s very much like taking over centre stage throughout his instruments. Bill gives him carte blanche to go towards a symphonic route with a jazzier tone before hitting the bright lights of Broadway as the two of them work well together. They go through space and time with the audience during the classical-sonic alchemy of what is happening in the scenario between Freder and Maria, knowing they have an uphill battle in the climatic scenes. But there is a Supertramp structure they would do from the Crime of the Century-era.

Or the Leicester take of ‘Maid in Heaven’ gives more of the good throughout the De Montfort Hall’s acoustics. You can feel the crowd really enjoying the song as Nelson pours his heart out in his vocals along with the backing from Tumahai as well, knowing that he’s got Bill’s back no matter what or going to the Beaches of watching the sunset in the Bristol performance on ‘Piece of Mine’. The reggae influences takes us dancing throughout the hot landscapes of Jamaica with a joyful groove the rhythm section would create. And a trip to the Golden Age of Hollywood in the 1930s of Ginger Rogers’ dance work to the song throughout Bill Nelson’s guitar textures.

Who couldn’t forget the ‘Modern Music Suite’? This is quite a Beatle-sque composition that is done amazingly live than the studio version. I can tell that there is a tribute to the second side of the Abbey Road medley that is done like an opera by going through a psych, hard, soul, and spacey voyage they would do. With some unexpected changes from Bill’s revving textures that is like a motorcycle ready to drive off into the night.

The 33-page booklet contains photos of the band’s UK tour, photo shots, along with a promo poster for Live! In the Air Age, tour scheduling, original master tapes from the Rolling Stones mobile, the master tape boxes for the live album, and Bill’s memories about the tour. While the band made one more album with Drastic Plastic before calling it a day, it is quite understanding why this band at times were often under the radar.

But 44 years later Live! In The Air Age is quite the revelation. It’s not just the original live album, but the live recordings that are on this box set, will give you a historical momentum on how much they went through. And knowing that it will place a special moment in the audience’s hearts and minds throughout those performances that will live on for many years to come.