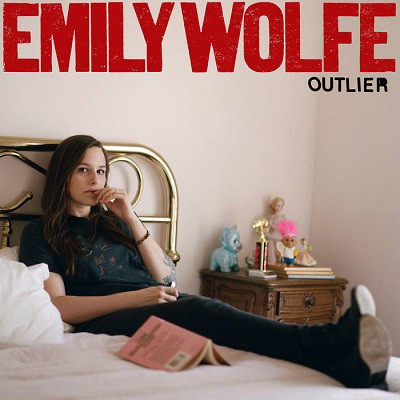 Yesterday afternoon, I was going for another walk in the hottest part of the day to get some fresh air. And then, something extraordinary happened. My earphones took me in for a complete surprise for a new style of sound. That of course is Emily Wolfe. Believe me, it was a walking exercise I will never forget, listening to her latest release from the Crows Feet label, Outlier. This was like a sonic experience I couldn’t let go of.

Based out of Austin, TX, Emily began playing guitar and drums when she was very young. She started performing when she was in College at St. Edwards University. She released her debut EP in 2014 entitled Roulette and toured with Soul/R&B singer, Allen Stone. Not only had she toured with Allen, but with Heart and The Pretenders as well. Opening for two of the most legendary bands must have been quite a combination for her. Soon in 2019, she released her sole self-titled debut and received critical acclaim from NPR, The Wall Street Journal, MTV, and various other outlets. I have to admit though, Emily isn’t just a singer-songwriter, but a fighter as well.

With Outlier, its like an eruptive cannon blast waiting to happen. Moving from the Blues Rocking sound, into a ‘80s new wave orientation. She always wanted to leap forward to see what she’ll do next. Listening to the second album is quite a revelation. From the aspects of Ra Ra Riot, The Arcade Fire, Cluster, Kate Bush, and the latter era of Pink Floyd’s The Division Bell, she knows her musical ingredients very well. ‘No Man’ is a rumbling electronic blues rocking voyage. Hand-clapping punches and ominous chain gang composition, you feel Emily transforming into a snarling beast capturing the essence of Mick Ronson’s Ziggy Stardust-era meets Jimmy Page’s time with The Yardbirds.

‘Cover of Virtue’ is a futuristic rocking dance club vibration. Driving down and seeing the landscapes of Austin City Limits and crossing over with a Pat Benatar punch, followed by Ra Ra Riot’s The Rhumb Line-era, it deals with how you can be successful as a fashion model before continuing on this questionnaire routine on ‘LA/NY’. Emily’s lyrical textures on whether she wants to be in The Big Apple or the City of Angels, can be very tricky despite two of those cities are very super expensive to live in. It can also be hotspots for the paparazzi to hunt down celebrities and a photographic money shot to be in Tabloid magazines. While it is a questionnaire composition, it makes a very difficult decision on deciding whether they want to be with their loved ones, or being used as pawns in the person’s life as Floydian-like structures throughout the midsection to give some challenging approaches.

On ‘Vermillion Park’, Emily almost could’ve written this song for John Hughes’ The Breakfast Club. Continuing with the highway driven textures and electro drumbeats, followed by Emily’s double-tracking reverb vocals, I can imagine she had Ra Ra Riot in the backseat with her once more handling the rhythmic beats. ‘Damage Control’ opens up in the style of Muse’s ‘Uprising’. With its shuffling synth blues with a militant tempo and channeling Matt Bellamy’s guitar lines, I always felt that Emily deserves to be a part of the Rune Grammofon label. She keeps everything up-and-running while holding on for dear life as the booming drums and guitar lines are making the jump to light-speed.

As ‘Death Row Kiss’ sounds like Grindhouse feature film for the Drive-In’s, Emily is like a boxer, honoring Muhammad Ali and fighting back really hard. Tackling the subject of the darker side of Hollywood, you can imagine she listened to one of the unsung groups of Denmark’s answer to the Canterbury scene, Supersister. ‘My Lungs Give Out’ evokes not just some of the textures from Andy Summers, but the usage of Frippertronics that was done on David Bowie’s masterpiece, Heroes from the Berlin trilogy for the structures on the melody between vocals, guitar, and it’s sun-rising atmospheres.

Outlier is Emily Wolfe’s icing on the cake. She is like a conductor at times giving Evan Nicholson, Ciellan Hyatt, and Michael Shulman directions on where she wants them to go. In an interview from the American Songwriter website by Tina Benitez-Eves, she not only describes where she wants to take her second release, but making it like an electrical tightrope to move forwards, “There’s an underlying thread of feeling different and feeling like I want to achieve something besides what’s expected of me.”

For Outlier, we as listeners, are a part of the dangerous tightrope she is making us walk on. And it’s a walking adventure we will never forget.