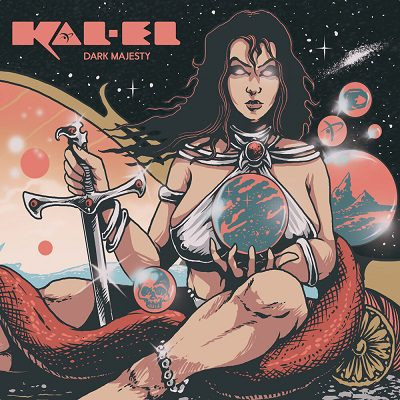 Doom? Check! Fuzztones? Check! A nightmarish journey into some Twilight Zone-sque stories from Kal-El? Oh hell yeah! It’s been a while since I’ve listened to some great music coming from Norway. Whether it’s Motorspycho, Krokofant, Elephant9, Gazpacho, or White Willow, Kal-El takes it to a whole new level of a sinister, brutal, and in your face metallic sandwich!

Formed in 2012 in Stavanger, Norway, they have released three studio albums and two EPs in the can. They can play hard, menacing, and at times, mellowing atmospheres. This year, after being signed to Sweden’s underground label, Majestic Mountain Records, they have counted down for blast-off with their fourth studio album, Dark Majesty. With its striking cover that is almost out of the adult illustrated fantasy magazine, Heavy Metal, Kal-El are blowing the doors down so hardcore, you might want to strap yourselves in. Because the centerpieces that are on the new album, will make you want to shit your pants nonstop!

‘Temple’ starts off with a post-punk intro, going into the heart of the pyramids in ancient Egypt. Featuring guitars, bass, and heavy lines that boom out of the bass drum patterns sounding like a bomb exploding at the right moment. You feel that you are a part of Kal-El’s service inside the church as the Captain’s experience of what he saw inside those pyramids. And what he reveals in the song, is quite a revelation that has never been seen before outside the media circuit with its middle-eastern effects, dooming chords, bass tones, and an apocalyptic section that goes into the battle. ‘Spiral’ is a jogging composition. With its non-stop head-banging effect, it is a car-driven section that goes for about 900 miles per hour that delves deeper into the Sabbath Bloody Sabbath period going batshit crazy inside the loony bin.

‘Mica’ sees Kal-El walking into Violent Femmes’ territory as they meet both Candlemass and Electric Wizard as they served the band, hot and spicy wasabi tabasco tea that is going out like hotcakes while ‘Hyperion’ has these thumping riffs by galloping along to the rhythm section. While it deals with making an agreement with the devil, you can hear some chainbuzzing guitar structures, ready for some tidal waving destruction thanks to those workout improvisational exercises.

The title-track features this tritoning opener, hybrids Black Sabbath’s first album and resurrecting the story of Taarna from the 1981 film of Heavy Metal. Not only she’s reborn, but coming back with vengeance as Kal-El’s music continues her story, filled with blood, gore, sword & sorcery, and heavy music! ‘Cometa’ is a motorcycling thrash rocker, hurling through a space madness adventures throughout the cosmos with some screaming intensity as the Star-gate sequences go off the wall nonstop before the two ten minute tracks of both ‘Kala Mishaa’ and ‘Vimana’ return for a big epic finale from a long psychedelic journey into our hallucinated limits of space.

Kal-El may not be everyone’s cup of coffee per se, but they know their metal very well. And it may be challenging at times, but Dark Majesty is like the comic book story that we really needed, right before our eyes. So this is the band you might want to watch out for in the roaring ‘20s.