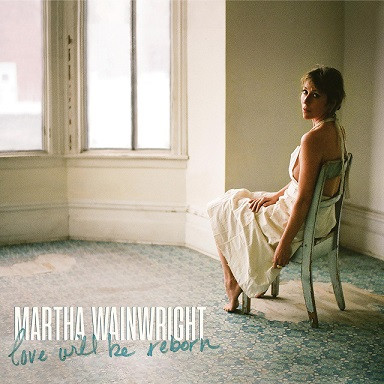 Love Will Be Reborn by Martha Wainwright

How I came to fall head over heels with the Wainwright family isn’t completely clear in my memory. I got to know the music of Rufus first and that’s how I came to find Martha Wainwright. Both of these wonderful artists have two things (at least) in common, aside from being siblings. They are both possessed with incredible voices and both put on truly amazing performances when you see them live. I’ve caught Rufus and his outrageous showmanship three times now but only had the pleasure of seeing Martha once, in the metropolis that is Lisburn, Northern Ireland. I’m sure it sticks in Martha’s memory!
Stunned by the stark honesty the song for her Father, ‘Bloody Mother Fucking Asshole’, I have been keenly listening to Martha’s studio output ever since. With her first album since 2016’s Goodnight City, Martha is back with Love Will Be Reborn. Life’s been kicking Martha in this time and this album is bursting with emotion and was clearly some kind of cathartic experience to make. Having said that, it’s not a painful listen, far from it. Martha is on her way back, personally and musically.

Produced by Pierre Marchand (who also produced Rufus’s Poses album), Love Will Be Reborn was recorded in the basement of Café Ursa, in Martha’s home City Montreal. Playing guitar and piano, Martha was accompanied by Toronto musicians Thom Gill (guitars, keys), Phil Melanson (drums, percussion) and Josh Cole (bass). The production and instrumentation is sublime, it needs to be to match Martha’s stunning vocals.

Opener ‘Middle of the Lake’ glides in on a backdrop of gorgeous guitars that float over a drum pattern that refuses to settle into any conforming groove. This haphazard musicality allows Martha the opportunity to vocalise like singing is an Olympic event. It’s marvellous of course as her voice is pure gold. You won’t be singing along to it any time soon though. The gentle ‘Getting Older’ is a countrified ballad lamenting the unavoidable onset of age. Martha’s voice is rich and emotive, a throaty crackle infiltrates that joyous soar. “Can you hear my words, can you feel my words?” she questions while channelling Kate Bush’s stunning ability to send melodies soaring into the sky.

Title track ‘Love Will Be Reborn’ is a song so majestic in melody that brother Rufus could sing it too. When Martha keeps it simple and reigns in the theatrics it’s just as beguiling as her voice is laced with emotion no matter how she delivers her lines. Listen closely and you can hear some wondrous musicianship as the backing band pitch up some rich instrumentation to ably match the quality needed for an artist of Martha’s calibre.

Reminiscent of the languid jazzy tones of long-term Wainwright cohort Joan Wasser (Joan as Policewoman), the slippery groove of ‘Being Right’ finds Martha threaten “I’m one breath away from killing you”. Occasionally the Wainwright folk like to strip back the instrumentation and showboat a little. That’s okay when you are possessed of the outstanding voices that they are blessed with. Unfortunately, this can sometimes be accompanied with the compromise of memorable melodies as the songs stretch out into something I find less tangible. Martha is more prevalent with this particular style of writing and the album started so strongly, but ‘Report Card’ allows my attention to wander.

The flashy ‘Body and Soul’ features some delicately plucked acoustic guitar and flittering pianos that are the vehicle for the journey that finds Martha’s voice swoop and rise with truly remarkable ability. By the song’s end Martha has stretched her vocal chords out so much that they threaten to snap. One of the more muscular and snappy songs on the album is the rocking ‘Hole in My Heart’ which has a little hit of Sheryl Crow about it. Over a very fine shuffling groove and lush instrumentation, ‘Justice’ has an anxious edge to it as Martha beautifully enunciates words to incredible heights and lengths. ‘Sometimes’ is a sprightly tune that bubbles and pops with melody and vigour, another track that I can hear Rufus sing too. Bursting with hooks, it feels like Martha can’t control her urge to get out as many melodies as she can in the shortest space of time.

The less appealing ‘Rainbow’ is a very loose song that struggles to find any steady groove. Even the band sound at odds with the direction of the song as the instrumentation jumps about like a cat on a hot tin roof. Growing up in Montreal, Martha has a penchant for the occasional switch into chanteuse territory. She has previously released two albums sang entirely in French. ‘Falaise de Malaise’ is a beautiful haunting ballad over melancholic piano and strings to bring the album to a close.

As I previously mentioned, I found Love Will Be Reborn a very fine return to form for Martha, probably her strongest album yet I would say. Her voice is truly remarkable, and age isn’t diminishing her ability to soar. The instrumentation on this record is lush and rich, perfect for Martha to feature as the main attraction. I hope whatever troubles Martha has had to deal with fade away and she finds some goodness and hope, to keep making more wonderful music like this.