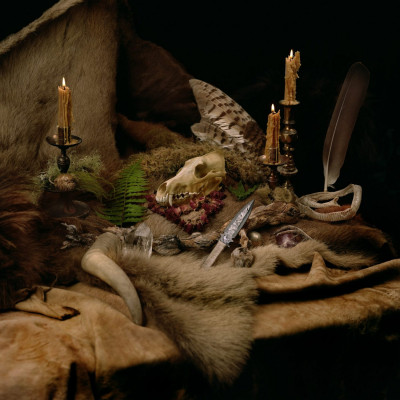 Primordial Arcana by Wolves In The Throne Room

Wolves In The Throne Room are a special band, I knew that the instant I first heard ‘Queen Of The Borrowed Light’ at the start of 2006’s debut Diadem Of 12 Stars. The thrilling combination of ominous black metal thunder combined with tortured howls, all wrapped up melodies that lift the whole thing out of the darkness, is just a thing of beauty. And this, their seventh studio album, and the band’s first completely self-contained work in terms of recording and production, is the pinnacle of their achievements. It combines a lot of the fury and darkness of their early work with extra textures and atmospherics made by synths, as in their later dark ambient material, and throws in masses of soaring melody to create the perfect whole.

‘Mountain Magick’ starts as a statement of intent: it’s classic Wolves, a maelstrom of pummelling metal underpinned by a beautiful looping guitar melody that makes the tune so much more than the sum of its parts. It’s achingly good. The root of Wolves In The Throne Room has always been the band’s connection with nature. The album title refers to ancient energies, and this link with the Earth and the natural environment comes through in everything they do, from song titles, to album covers, the band’s lifestyle in the Pacific Northwest of the US and the atmospherics of ‘Mountain Magick’ and other tracks on the album, invoking the spirit of the wilderness.

As alluded to, there’s a lot of light and shade on Primordial Arcana, something I enjoyed a lot, as one-dimensional, one-speed metal just isn’t my thing. The mid-paced ‘Spirit of Lightning’ is a melancholic affair, led by a chiming guitar and the trademark vocals. Other tracks, too, such as ‘Through Eternal Fields’ combine passages of furious riffing with slower, more doom-laden sections. Synthy atmospherics are brought to the fore in ‘Underworld Aurora’, and in contrast, the masterful and epic ‘Masters of Rain and Storm’ showers primeval black metal on the listener: there’s a tone to the guitars on this track, along with those on ‘Primal Chasm’, that took me back to the first wave of BM in the late 1980s. The whole album showcases the skilled craftsmanship in each track.

This is my favourite Wolves In The Throne Room album since their debut, Diadem Of 12 Stars: it showcases everything that the band has to offer, and has offered over their career. It captures both the devastating melody and heaviness of early material, and the symphonic and ethereal moods that came with their later work. There are depths to this LP that only reveal themselves on repeat listens, and it will be on my turntable for a long time to come.