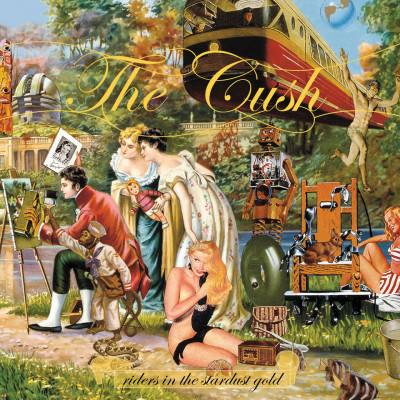 Riders in the Stardust Gold by The Cush

Mad Bunny is a new record label set up by musical polymath and multi-Grammy Award winner, Ben Harper, and The Cush, a Texan band who are already 5 albums deep into their career, are his first signing. Now, whatever I was expecting from a band promoted by Ben Harper this wasn’t it. Despite releasing blues, reggae, folk, soul and rock music I didn’t expect him to set his label’s stall out with a slice of dreamy, psychedelic Americana.

Lead by husband and wife Burette and Gabrielle Douglas, The Cush have been releasing music for 20 years, all of it worthy of your attention. Burette and Gabrielle share vocal duties on a sound largely pitched between swooning, shoegazey psych, deep lumbering Crazy Horse guitar shit-kickery and tight but loose krautrock rhythms. That’s just an outline as virtually every song seems to have the freedom to twist in and out of multiple styles at will, and astonishingly it always works, their mastery of form something to behold. On their last couple of albums a tighter, power pop aesthetic came to the fore with harder, snappier beats,  not a million miles away from Spoon, but on Riders In The Stardust Gold a dreamier, hallucinogenic air pervades. Like Julee Cruise’s soundtrack to Twin Peaks moving out of the pines and into a shimmering dustbowl, the music is vast but dense, claustrophobic but expansive.

It opens with the single ‘Haters’, co-produced by Harper, it’s a winsome, folky strum with an apocalyptic Western vibe. The lyrics, however, are upbeat – “don’t let the world ever hold you back from where you’re going“. Gabrielle’s soft, ethereal “ooohs” creating an extra haunting earworm. Gabrielle’s vocals throughout are affecting and effective, she has breathy, gently desolate voice that, especially on the slower numbers, reminds you of Mimi Parker from Low.

At the other end of the spectrum ‘Chariots of Smog’ sung, with slackerish restraint by Burette is a Jesus And Mary Chain-esque slink of super-sweet nihilism. “This generation will soon be done” and “let the end times roll” he shrugs whilst some huge whammy assisted guitar action goes off into a menacing, climactic vibe.( It is worth noting that both Burette and Gabrielle are big fans of Swervedriver and their Morricone-meets-Mudhoney sandblasted revving can be heard in many of the grooves here).

Not at all afraid to have a bit of fun and show off their influences, the band have resurrected “Daydream Beach” from their previous album Transcendental Heatwave for their new label debut. The song is a very cheeky nod to Sonic Youth’s Daydream Nation album, with those iconic ‘Teenage Riot’ guitar tunings from Ben Hance. However rather than using them to head for a punk rock riot, they propel you amidst fantastically euphoric psych. It’s an easy win, but they do it with such panache that you cannot resist.

‘Summer’s Gone’ also has a bit of the Sonic Youth drone going on, but the combined vocals of Burette and Gabrielle add a warmth to Burette’s bass rumble and krautrock drive of the percussion.

With only six tracks the band makes sure that each one is an event, although perhaps ‘Ajna Returns’ is the one that leaves the least impression, still, there’s some great drumming from the consistently impressive Austin Green and a lovely twinkly breakdown.

Gabrielle again comes to the fore on ‘Fly’, a waltz, with a crawling, dry ice creep. It begins with big open chords and lap steel guitar and is the peak of their gauzy, weird Americana. Gabrielle’s pillowy, multi-tracked vocals summoning an overwhelming Lynchian vibe, it is ripe for use in movie or tv soundtracks.

Perhaps the one song that showcases the depth and breadth of band’s influences is second track ‘Beneath The Lines’. It begins like early Verve in their ‘Mad Richard’ era pomp – spacey psych with Nico-esque vocals from Gabrielle and all consuming twang. A crushing riffs begins to insert and assert itself which builds in pace and aggression. Then it turns into a huge lumbering Crazy Horse guitar work out, back to the Nico-esque vocals, but imagine her off the heroin and on an E! And there’s joyous punk girl shout outs in the mix too. It’s not going to get mistaken for Status Quo.

I initially had this album down as a headphones-on-and-eyes-shut blissed out type of slow burner, but then I played it loud on a proper stereo and it sounded huge! It is huge. It’s fantastic, even the cover is brilliant. The vinyl will be available soon, so off you pop and order it now.