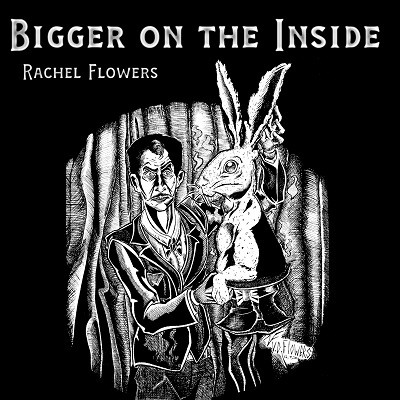 Bigger on the Inside by Rachel Flowers

Rachel Flowers not only is an amazing composer and multi-instrumentalist, but she can really sing. She goes beyond the “P” word, but beyond musical genres and played with the late, great Ray Charles, admired by Greg Lake, Keith Emerson, Dweezil Zappa, conductor Terje Mikkelson, and jazz musician Herbie Hancock.

Her 2016 documentary Hearing is Believing is a beautiful story about the structures of her family and how she had to embark on those challenges. She’s released two studio albums, Listen and Going Somewhere. Not only her Mom has helped with the lyrics, she also appeared in the fan video for Gentle Giant’s ‘Proclamation’ from their fifth studio album The Power and The Glory.

The video was the winner event of 2020 PROG Magazine’s reader poll. And believe me, Rachel has no chance of stopping. This year, Rachel released her third studio release, Bigger on the Inside. With a striking artwork done by her brother, Vaughan and her Mom’s co-written lyrics on ‘The Way That I Am’, she takes the different styles of music and put them in a blender to create an imaginative world that is beyond what we’re seeing.

Even though we abide by them, we can do whatever we want with them. Each of the songs on her album, is an epic adventure that is waiting to happen. ‘A B’ starts the album by sliding down these dangerous Crimson-sque vibes from the Larks’ Tongues-era with a midsection that has a cool Wurlitzer keyboard sound from the early Jazz fusion records of the 1970s.

‘Take Me Away’ begins as an ominous opening for a funeral with a Church Organ introduction. Rachel spreads her wings to be free from the chaos that is going on at the moment as she creates her own operatic carousel to life. While the lyrics have this Pete Sinfield-sque structure, you can feel the spirits of both Keith and Greg watching over her as their guardian angels protecting her.

Not only there’s a symphonic beauty, but a pop-orientated arrangement with her own written structures to the 1994 overlooked animated classic, The Swan Princess. There’s the Gershwin-sque organ grooves to capture the daily lives of what people do for a living in the heart of the Big Apple.

There are these eerie mystical landscapes that appears on ‘Too Much’. Rachel takes her listeners into a deep, dark cavernous place that is filled with mystery and questions by living in the post-apocalyptic world. The tempos start to rise for an intensive battle segment before returning back to Earth’s dry land from the complicated worlds between the left and right as it becomes a nightmare for them arguing and fighting with each other.

‘Love Today’ has stronger elements between Tori Amos and Kate Bush. You can imagine this song was recorded inside a church during Sunday Morning services. It’s almost as if it could had been written as a ballet with a heavy rocking orientation to add thunder and lightning throughout her sermon.

‘This Is The Way I Am’ co-written by Jeanie, she lends her daughter a helping hand to write in the styles of; Gary Brooker and Keith Reid, Howard Ashman and Alan Menken, and Elton John and Bernie Taupin. Written in the styles of Alice Cooper’s ‘Some Folks’ from this 1975 release, Welcome to my Nightmare, it has an off-Broadway arrangement for the Hammonds to fly upwards to the blue heavenly skies.

Featuring these Bossa-nova arrangements, its quite an autobiographical structure for Rachel. Not only she’s a fighter, but she is ready to fight back in the styles of Daredevil from Marvel Comics, who has four remaining senses to superhuman levels; tactile, olfactory, auditory, and gustatory.

‘The Darkness’ is a 10-minute epic beauty. Morning-sunrise introduction, there is something for the listener to return to those mystical and strange place that is calling for us. Done in the styles of Sibelius’ ‘Karelia Suite’ and the Disney Renaissance of 1991’s Beauty and the Beast, she sings in the style of Panic Room’s Anne-Marie Helder from her Satellite years while ‘Feel’ is a walking-dance from the pouring rain of Gene Kelley.

Sung in the style of Soft Machine’s ‘Slightly All the Time’ from the Third album, Flowers channels Mike Ratledge and Steve Winwood on Traffic’s ‘Empty Pages’. Not only we hear rain dropping effects that Rachel creates, but she blows the door down for her guitar to tackle the styles of Frank Zappa, Gary Green from Gentle Giant, and Focus’ Jan Akkerman.

‘Beautiful Dream’ is Rachel tipping her hat to the wonderful Mariana Semkina of the duo, Iamthemorning. While her spiritual vocals fill the empty the abandoned house that has been stuck in time, you have this mournful piano melody as she gives it the last rite before starting a new chapter in the character’s life from the Lighthouse album.

The closing track, ‘With You’ is a drive back home to be with your family. With its soft, warm, and gentle arrangements, you can imagine Paula Cole singing this song with Greek-Prog legends Aphrodite’s Child as her backing band with David Gilmour leading the pack with these Floydian-like textures.

Bigger on the Inside is Rachel’s imaginative movie brought to life on the silver screen. She has created this imaginative 2D animated musical that would have gotten Disney not only a big run for their money, but some real talent coming from the woodworks. And Flowers herself has some very strong and powerful messages that is brought to the table.