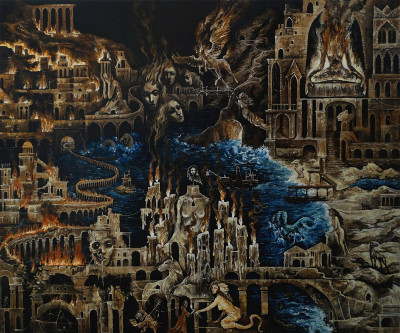 The mysterious K.M. or Kthunae Mortifer to his fiends has spent the last few years stamping his mark on the world of black metal. With Ars Magna Umbrae K.M. crafts a form of musical and mystical escapism into which both listener and musician fall blissfully into.

The Polish act has been making cosmic waves since his debut four years previous with the spectacular Lunar Ascension, an album that flawed critics and gathered cult worship. Coming hot off the heels of sophomore album Apotheosis, released just last year, is third full-length Throne Between Worlds, a six track esoteric quest into the deep worlds similar to that which grace the stunningly intricate cover art.

The absorbing cacophony of black metal’s dissonance, with its atonal riffs and cavernous nature, is one of many draws to this particular genre of music. ‘Into Waters of the Underworld’ opens this audial hellgate and floods you with the harmonious discord of esoteric metal and its angular sharpness. A ghastly interlude of wailing, disembodied voices over a whispered proclaimation brings a few chills to a macabre spine. This fantasic introduction only touches the surface and is a fairly restrained and atmosphere-thick opener, now the album can peel back its layers and reveal what lies deep beyond its stygian waters.

Each track takes you through a portal of dissonance into wicked abodes of horror and abyssal landscapes. These many-textured stories dwell between grating, avant-garde harshness and ethereal beauty, all shaped within K.M’s personal Lovecraftian macrocosm. ‘Consecrating the Shrine of Undoing’ allows for some expansive world-building and follows a very guitar-driven path of contrasting melodious plucks and crushing, tremorous riffs and ends on a pensive, post-black high note. ‘Treader On The Dreamless Path’ touches upon the fantastical, beginning with a synthy wall of dreamy ambience before making way for sudden, jarring and jagged guitars repeating an ear-piercing tone alongside guttural chugs and odd rumbling bass notes.

Tracks unfurl at a restrained pace, never forcing themselves upon you with too much in-your-face attitude or unceasing blasting. K.M tells his story mostly through his stringwork and perhaps none demonstrates this more than album closer ‘Metempsychosis (Transmigration of the Soul)’, an 11 minute epic conclusion which unravels its explorative journey through nuanced sections of transforming sounds. From a fiery blaze of blastbeats and snakey riffage melting away into a rhythmic drum beat and serpentine rattles to rather irregular and unconventional bass plucks and mysterious ambience.

Post-black metal glimpses highlight emotive passages as the harsh instrumentation tears through voids into worlds unknown. Blastbeats are used sparingly, in fact there’s barely any to be seen and not that they’re needed due to other creative depths. There’s even some interesting irregularity in the use of some instruments as K.M. is certainly not afraid to do things a little against the book and plunge riffs or ambience into avant-garde oddness.

K.M. is a world-builder who seems to have an endless imagination and these six tracks offer up an entire world of story in which pages flip to each chapter simply by listening to the music. Great music does that and Ars Magna Umbrae fall into that category of black metal bands whose music seems to paint a vivid picture. I, Voidhanger can seemingly do no wrong, with several top class releases out recently to add to their near flawless back-catalogue and the thoroughly absorbing Throne Between Worlds can add its name to that proud list.