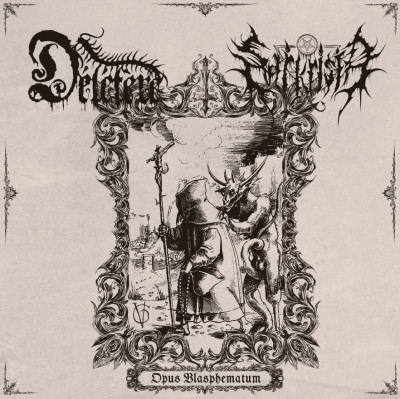 A split by two bands from Québec and Germany proves to be a fierce alliance, seemingly founded on each band challenging the other to smash as many layers of black metal atmospheric rage into their tracks as demonically possible.

Délétère’s contribution starts off so furiously that I had to check if my player had accidentally started it halfway through track 3. But no, they just dispensed completely with any easing-in via an ambient or acoustic intro, instead immediately flinging a noisy mess at the listener, out of which sprawls a piercing alarm-like ringing riff, matched with pummelling drums and hoarse yelling. Even when, halfway through the track, we get a gear change to a more soaring riff, there’s still so much going on with drum fills, wailing guitar lines and dense textures, that the sense of exciting claustrophobia is preserved. Next track ‘Verminanda’ keeps up the pace for five torrential minutes, moving through different phases and sections but again able to seamlessly keep up the closed-in frantic atmosphere.

‘La cour des fanges,’ the last of Délétère’s three pieces, then starts with a much more spacious entry, letting a power chord ring out while the glinting ice drips of a minimalist solo piano melody ring out. But of course this is a mere breath taken before plunging again into the snow, a moment of calm before the whitewater gets its hold again. You might say it tends slightly more to the ‘atmospheric’ than the previous two tracks, but don’t be misled, this doesn’t mean slower pace, more spacious sound, it just means all of the energetic density that went before PLUS yet more layers added, of melody, piano, interweaving lead guitar lines and more. And for an even longer track time, this one just shy of seven minutes. A creepy echoing piano plays out the last seconds of a three track combination which packs more in than some black metal bands have managed in a decade of releases.

‘Arrival of the Horned’ is an apt title for Sarkrista’s first track, a classic theme which they match with a mournful-epic-raging set of riffs, not over-complicated or fussy but just intersecting in compelling force. ‘Psalms of Impious Malice’ even finds its way to sweep along into some epic melodicism, but of course, this is hard won by climbing rock-and-ice slopes of grim flinty riffing. The guitar sound is great, buzzing and gritty, able to squeal and wail at the edges without overdoing the rock flair. Smeared guitar harmonies over one-two drum beats which then seamlessly break into more expansive faintly evoked Crom Dubh, which for me is a mark of excellent quality.

And that fairly describes both bands here… after the first phrases of their opening track here, you just settle in to what you know will be a reliably excellent mastery of savage but harmonically compelling black metal. ‘Sermons of Burning Blood’ iand ‘Unleash the Purging Fires’ return slightly more to the rage side of the equation, all relentlessly splashing cymbals and staccato growls of menace, but again those guitars are there to widen the melodic scope of all the grimness. There’s something similar in the main riffs for each of Sarkrista’s four tracks, a kind of twin attack harmony on riffs which are wavering up-and-down close steps. It’s so accomplished and forceful though, that this is a case where similarity ties the record together convincingly as a statement rather than sounding unoriginal or overly samey. And it really is a statement of quality, offering a massively intense burst of energy in their 20 minutes.

So the split as a whole is that rare beast, where two bands are well matched and both excellent, instead of leaving you wishing you’d got a whole album of one or other of them, both contribute distinctive but complementary halves which each feel like they’re self-contained but benefit from being heard in the vicinity of their companion. Highly recommended. 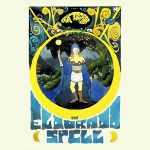