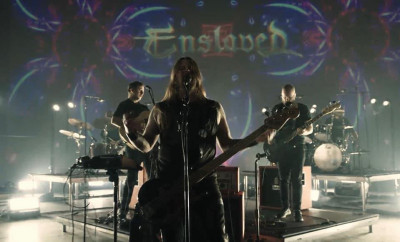 Until recently, like most of us, I’d scarcely imagined myself watching one live stream for any band, let alone five by one of my favourites. But Enslaved – a band constantly evolving – took the bull-by-the-horns from the outset, delivering a series of exciting streams throughout the pandemic. Beginning with a no-frills “camera in the studio” show (Rise Of Ymir) for the Verftet Online Festival, they embarked upon the Cinematic Tour in 2020, playing their latest album (Utgard) and a classic (Below The Lights) in their entireties, as well as a fan-chosen set-list (Chronicles of the Northbound). This latest stream is a collaboration with Bergen prog rockers Shaman Elephant, with suitably grandiose visual accompaniments from Bergen-based film studio KolibriMedia, and punctuated by interviews conducted with most of Enslaved by Harald Fossberg, Norwegian journalist and frontman for Turbonegro.

Given the career-spanning nature of their streams, Fossberg asks both Grutle and Ivar the same question: Do you see Enslaved’s career as more of a ladder, or moving in circles around a central point? Interestingly, to Grutle, the band has been an incremental upward progression whereas to Ivar, it’s about moving around but keeping their origin point in sight. Conducted with their usual good humour and affability, we hear the amusing story of how guitarist Ice Dale nearly became a drummer, how well new keyboard/clean vocalist Håkon Vinje is fitting in, and how new drummer Iver Sandøy has stepped up to the challenges of playing in Enslaved. The only thing missing from the interviews is any contributions from Shaman Elephant, as it would be interesting to hear their perspective, and a little more detail on how their collaboration with Enslaved came to be. But no matter: it’s Enslaved’s show after all.

Opening with the acoustic strumming of ‘Ruun II – The Epitaph’ from their recent EP Caravans to the Outer Worlds, the Big Band sounds like Enslaved at their most expansive and their most psychedelic – especially when the acoustic takes the centre of the sound again a few minutes in, accompanied by flange-treated bass and ambient, dreamy vocal harmonies. The crisp rock guitars are already in the original, the synth already adding kaleidoscopic contours, so what might seem an unlikely choice of song for reworking actually works perfectly. 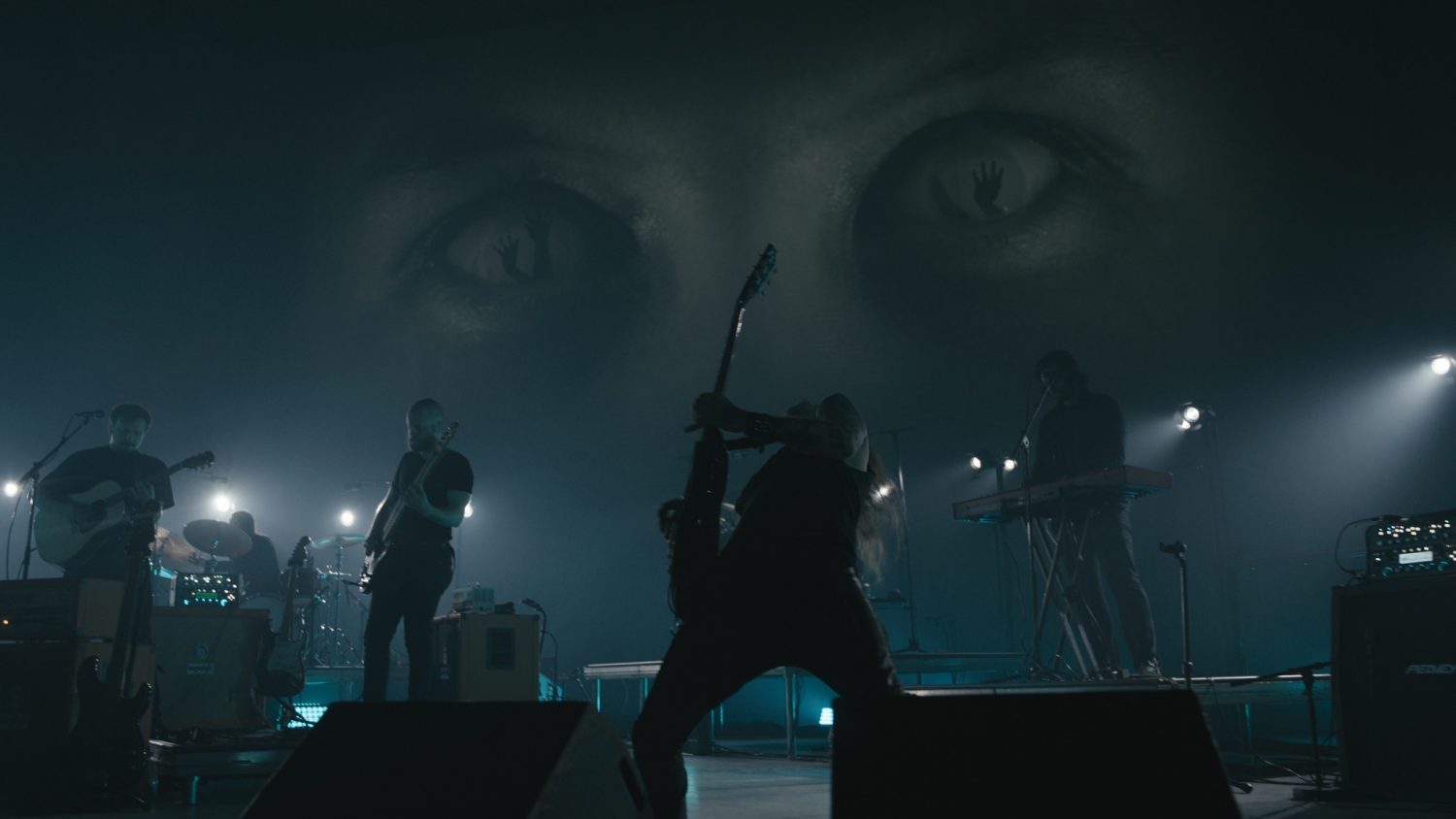 The thumping, stabbing chords at the start of ‘Bounded By Allegiance’ are not as metallic as usual, as this glorious track unfolds into a kind of melodic prog-rock reimagining of the original. Once you adjust your ears to the slightly lighter sound you realize – again – that these aspects were always present in the song, and that this Big Band version allows for the most open and detailed interpretation yet.

‘Sequence’ from 2020’s Utgard shows that Enslaved still write heavy songs, and showcases the perfect way in which they mix the clean/melodic and the dirty/dissonant. Here Shaman Elephant’s addition becomes further apparent, adding vocal harmonies, and again providing depth to the acoustic, dreamy break. The song’s lyrics combine the mystical and the scientific in a fascinating manner (“Genome of the secret being/Residing in the shadow-half), providing the best opportunity for Shaman Elephant to add all manner of melodies, harmonies, chimes, swirls, and subtle rhythmic touches in the quiet sections between verses. 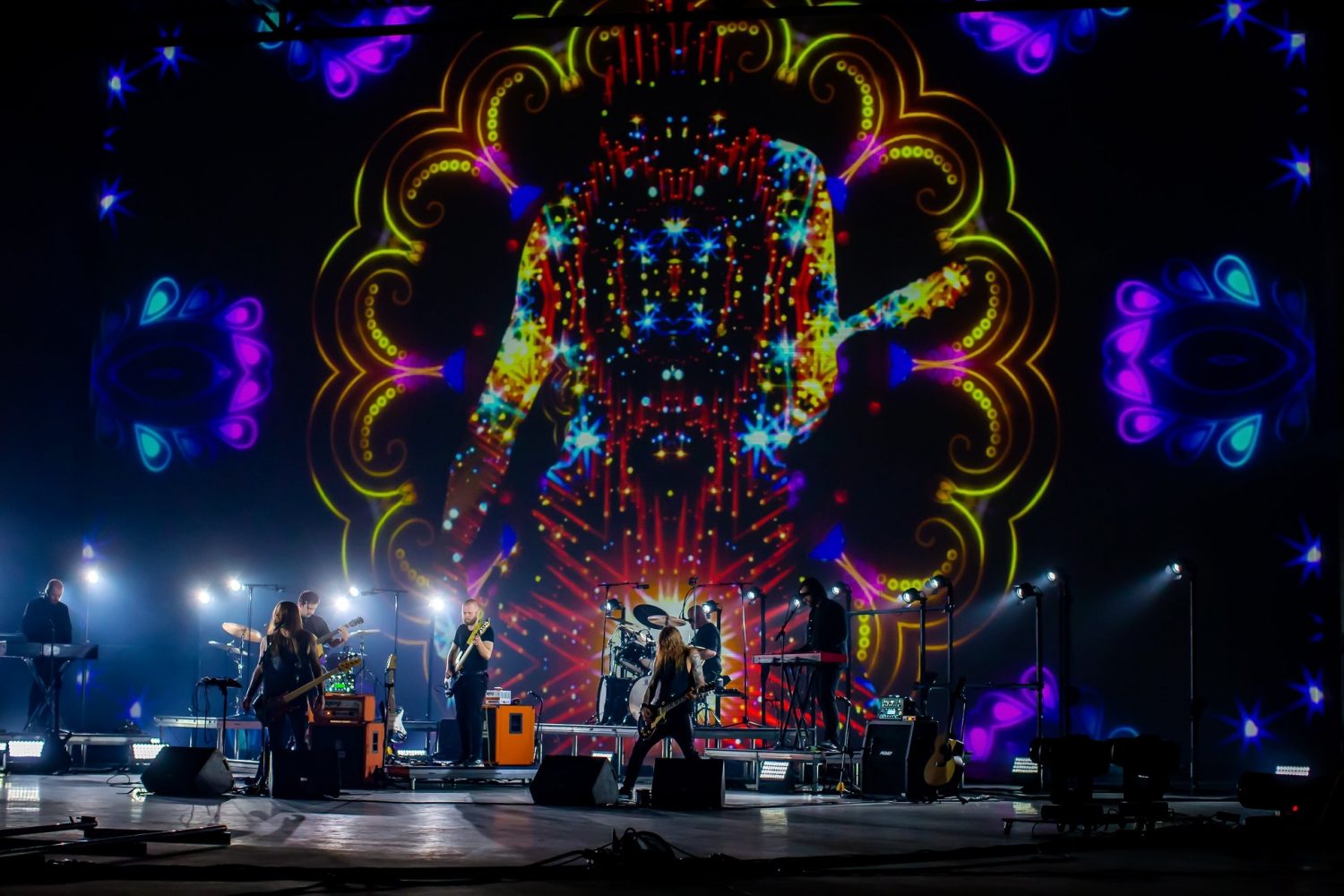 This is clearly Enslaved’s most involved stream to date. The studio looks enormous, with huge projections stretching up high above the band, unfurling beautiful kaleidoscopics: like pixelated fireworks exploding into 16-bit bioluminescent squids. The thread of Norse myth which runs deep through the band’s fifteen-album career is never far away, and runes, eagles, and warriors certainly make a visual appearance here; yet, as with everything the band do, nothing feels tacky or obvious: it’s Enslaved goes art-house in the best possible way. On the contrary, the visual aspect of this stream raises the bar yet again, from the Cinematic Tour which brought a new level of clarity and nuance to the basic task of filming an energetic band, adding a visual narrative quality to the experience without losing the focus on the live playing.

Whether we use the ladder or the wheel analogy, Enslaved have never fully shed the black metal elements of their sound, and even early classics like ‘Slaget i Skogen Bortenfor’ – raw, crude, violent – sit comfortably alongside their new material. Less crude, thicker and better executed this Big Band version may be but Enslaved can still put out the nasty when they want to.

Live staple ‘Havenless’ is always a personal favourite, and it works particularly well with the Big Band. The original song has a bit of almost everything that makes Enslaved great: “Viking” choral chants; catchy yet heavy riffs; jagged, staccato prog riffs; parts where the organ takes over for suggestions of otherworldliness. Again, nothing much has been changed structurally, but the addition of Shaman Elephant to this song really opens it out, expanding on those already vaguely otherworldly bits, making the riffs even heavier and tighter. 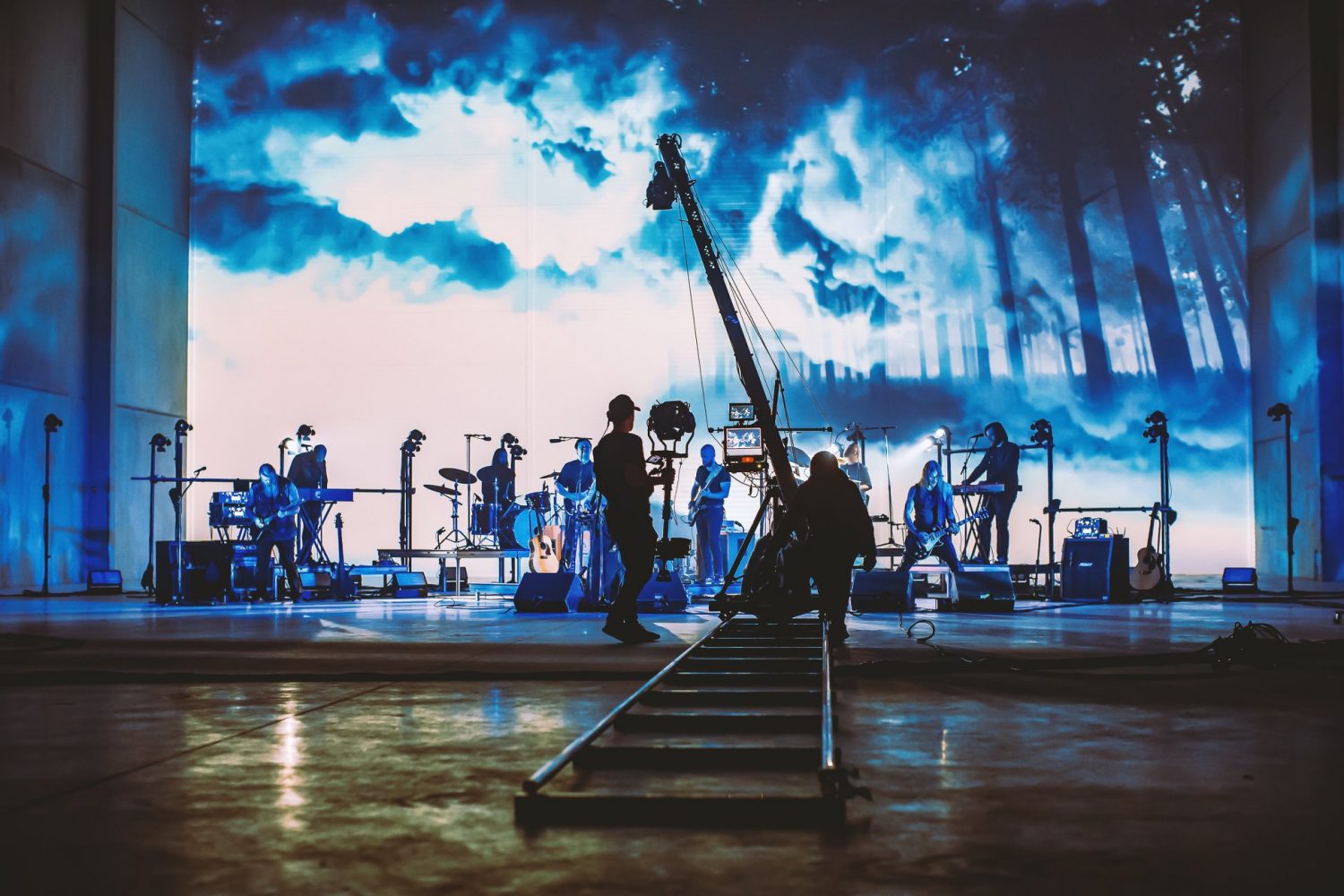 Closing with choice tracks from 2017’s E, the Big Band draws out the strong ear for melody and harmony that Enslaved have always had, but perfected here, raising a strong songbook to dizzying new heights. While Enslaved’s career may we compared with someone like Opeth (extreme metal band evolves to incorporate extensive prog elements), Enslaved have managed to retain the core voice and heaviness of their sound, whilst continually climbing that ladder, or spinning around that wheel, propelled by the momentum of their creative energy and dedication to a shared vision.

My overall impression was that this felt less of a collaboration, where Enslaved and Shaman Elephant write, work or rework material together, and more of an interesting extension and expansion of Enslaved with help from some friends. And this is, in many ways, exactly how Grutle framed the event from the outset. This did not sound like the sound of two different bands with their own sounds melding, rather two playing one sound in unison: two rhythm sections locked in tight; multiple voices supporting Grutle’s theatrical rasp and Håkon’s angelic highs; all transported on a magic carpet of polychromatic strings. The Big Band as promised, in other words, and certainly not a bad thing. It also felt like a logical extension of the sound on their latest EP, and it was certainly these latest tracks that worked best. I have no doubt that, upon studying the inevitable release of this show, the full extent of Shaman Elephant’s contribution will become clear, and these versions will make a valuable contribution to the sound of an ever-expanding band. 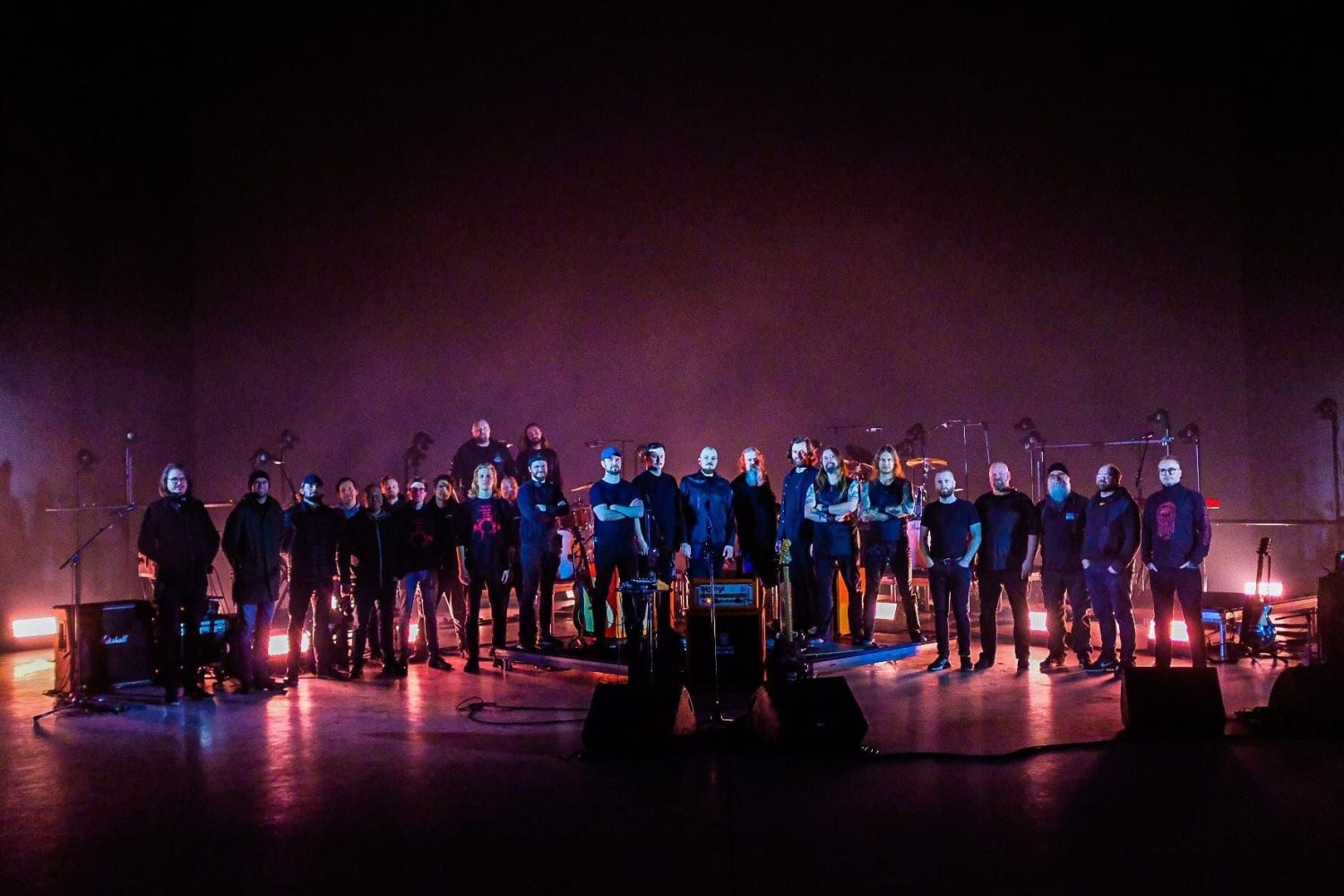