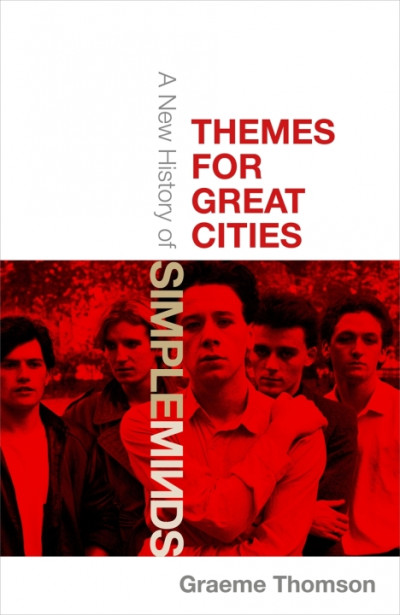 To the casual listener of music, Simple Minds were one of those bands who had a few hits in the 80’s, played a few stadiums, then promptly disappeared. Indeed, bearing in mind their ubiquitous nature towards the end of the 80’s, spurred on by hits such as ‘Alive & Kicking‘, ‘Sanctify Yourself‘, and ‘Don’t You Forget About Me‘, you could be forgiven for wondering quite what had happened to them. Even when the stadium anthems disappeared and the band became almost a political voice, along with one of the more unusual number one hits ever with ‘Belfast Child‘, there was still a feeling that that brief burst of magic was over.

The irony is, that although the band seemed to disappear from mainstream view, they had already spent much of their early years as nothing more than a cult concern. To those jumping on board at the point of fame, those early albums would remain either unknown, or impenetrable. Graeme Thomson recognises this in his book Themes For Great Cities, and spends much of his time bringing that story to life. Such is the power of Thomson’s narration throughout that you find yourself revisiting (or even discovering for the first time) the albums that would go towards creating one of the biggest bands of the 80’s.

It’s in no doubt that Thomson is a huge fan of the band, and there is little here of a critical nature, making this a very much a straight run through of the story of two young kids from Glasgow (Jim Kerr and Charlie Burchill) and their remarkable rise to fame. Interspersed with interviews from peers and famous fans of the band, the book is a vivid account which balances the story arc with in depth analysis of their creative process in the studio. It is this that makes the book such a fulfilling read and you never feel like anything is being skimmed over.

Obviously there are moments in the Simple Minds story which get glossed over, particularly with the leaving of various members throughout the years, although this is tempered by first hand accounts from the band reflecting on how maybe things could have been done differently. There certainly seems to be no malice or animosity, at least not on the surface, and every member is first to agree that it was the music that always came first, and still does.

It’s perhaps fitting, or maybe a sign of the shallowness of fame, that once the narrative reaches Sparkle In The Rain and Once Upon A Time, it becomes almost an afterthought to the build up of the albums which preceded that success. It would have been perfectly apt to finish with New Gold Dream, which for many of the earlier fans was the last Simple Minds album before they jumped ship. To Thomson’s credit he continues with a brief overview of the post stadium years bringing it almost full circle with a description of the 5×5 tour in which the band revisited many of those early songs which they had not played in years. Even during the height of fame it would be unusual to hear anything outside of ‘Love Song‘ or ‘The American‘, and through conversations with Kerr and Burchill you note an acceptance that the music they made on those first five albums was of great value.

Themes For Great Cities is an essential read for not just the hardcore Simple Minds fan, but also those who may just about remember dancing to ‘Don’t You Forget About Me‘ in the school disco, and you come away with a new-found respect for the band. The albums that went into creating the band are ripe for rediscovery and contain some wonderful music. Never afraid to experiment, or wear their hearts on their sleeve for a big anthem (often at the same time), they were so inspirational that even that other big band of the time, U2, admitted to being influenced by them. Get a copy, settle down with your drink of choice, line up the albums for listening, and enjoy the story of one of the defining bands of the 80’s and beyond.