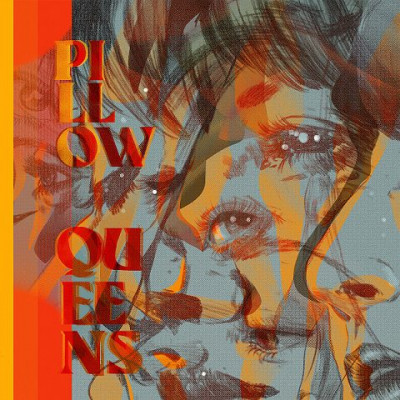 Leave The Light On by Pillow Queens

Dublin’s Pillow Queens are a new name to me, though Leave The Light On is their second album. Formed in 2016, the quartet released their debut In Waiting, in 2020 and subsequently found them supporting artists like IDLES, Pussy Riot and Future Islands. It’s not hard to explain how the attention is widening as this album features ten songs of magnificent indie rock, bursting with freshness and really addictive tunes. Recorded in the spring of 2021, with producer Tommy McLaughlin, this is such a vibrant fully formed album, it bodes well for the future and what the band can do.

Opening with the stunning ‘Be By Your Side’ the guitars ooze a country twang and Pamela’s voice is instantly appealing. The melody is sprightly and sucks you in like breathing in cool air on a breezy sunny summer day by the sea. The band allow Pamela to be the focal point as she swoops and glides her lines with stunning attention to detail. But listen closely to the music and you’ll find layers of intricacy that marvel with each play. The song bursts into life at the end with a splendid fuzzy blast of distorted guitars, just enough to leave you wanting more. ‘The Wedding Band’ opens with sublime backwards sounding guitars that ebb and flow as Pamela tenderly sings a yearning melody. The song showcases a real expert way with a tune and structure, the first noticeable little inkling of the lovely Dublin accent peeps in with the pronunciation of “crying”. There are glorious little embellishments in the instrumentation as the guitars flicker and tease. Have I mentioned the massive chorus yet? These songs will be echoing around arenas before long.

Pamela’s voice reminds me of another singer, but I can’t put my finger on who, yet she is utterly unique in her accentuations and how she guides the melodies. How she twists the words impossibly to fit these snaking melodies is very akin to James Dean Bradfield’s ability to fit in more than it seems viable. ‘Hearts & Minds’ is another fine indie rock pop nugget that completes an opening trilogy of exceptional songs.

The swooning guitars that open album highlight ‘House That Sailed Away’ ooze sheer class and when Sarah starts to sing, your heart will melt. The chorus of this song, resplendent with a gorgeous swell of instruments (can’t tell what exactly) makes for what I think is the best song I’ve heard this year. It is just perfect. Sounding euphoric yet melancholic, when the song shifts into the final section, it’s hard to keep up with the hooks and when Sarah sings the refrain of “I want that for you” and some brilliant 80s synths pop in, I am lost for words as to how good this sounds. You need to hear it for yourself. With headphones on by the way.

Striking guitars fire up ‘Delivered’ and for the first time, I’m hearing a Pixies influence as the muscular deep twang mixes with cooing multi-tracked voices and the mood becomes more sombre. As the track sweeps to a close the guitars arc and rise with post rock majesty. ‘Well Kept Wife’ is a zippy song with springy guitar lines and a twitchy melody, again there’s a ridiculously catchy chorus that jumps into your head and refuses to leave. The closing lines “Somebody waters the plants”, given the story told in the song, are so cheeky it’s just plain outrageous. ‘No Good Woman’ is bursting with hooks and twists and turns, a really complex yet deceptively simple song.

Pillow Queens can do the most excellent ballads and the tenderness of ‘Historian’ is thoroughly joyous despite being a song imbued with melancholy. The guitar work throughout, shows off an extremely clever way with dynamics as the volume shifts effortlessly, and the feedback is loosened and tightened like a whip being cracked. ‘My Body Moves’ is a summery shimmery song that shows a warmer side to some of the more acerbic chops on the album, until it’s explosive finale which actually has some of the fiercest guitar noises on the album! Then ‘Try Try Try’ ends the album in glorious fashion with soaring melodies and swelling guitars that roll along easily, a campfire singalong, with added amplification.

I happened to find this album purely by chance, noticing it in our review lists for the Dublin mention. Coming from this island I feel duty bound to try and give exposure to artists from here. Pillow Queens don’t need much help from the likes of me as the music is pure quality and this set of songs must surely find the band many more new fans. The band are set to spend much of this year touring the world in smaller venues. Catch them now while you can because Pillow Queens are destined to be filling arenas before very long.