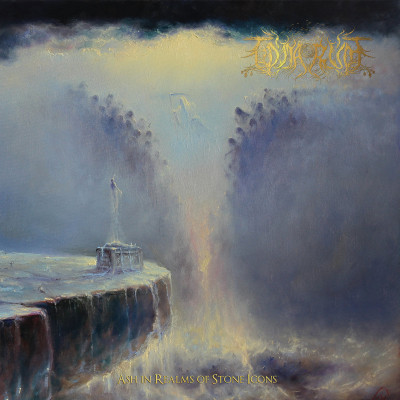 Ash in Realms of Stone Icons by Tómarúm

Birthed in 2017, Atlanta, USA based progressive black metal duo Tómarúm have been turning heads ever since their attention-grabbing EP Wounds Ever Expanding was unleashed. The talented young duo, consisting of Kyle Walburn (guitars, vocals) and Brandon Iacovella (guitars, vocals, contrabass) are joined by Inferi’s Spencer Moore on drums and several guest musicians to unleash their debut full-length Ash in Realms of Stone Icons.

The lengthy, expansive and vocal-bereft introduction to ‘Condemned to a Life of Grief’ allows you to soak up tremendously soaring music as it sweeps through various courses, finally sprinting into a speedy blackened stomp of grandiose, clattering drums and emotive tremolos. Riffs have a particularly majestic and fluid nature to them, playful and dancing, undulating from icy, grim tremolos to more dulcet and at times breaking into intricate solo-riffage. Words don’t do it justice, it’s a track that packs a punch as well as throwing a plethora of creativity into the cosmic pot. Immediately ‘In This Empty Space’ is a more crushing entity, heading right into death metal territory with pounding drum strikes, harsher vocals and whirlwind solos. Guttural guitars herald a more experimental second half, eventually traversing a slightly different path with an out of left field warbled jazzy improv section but caps the track off with a stunning blastbeat-heavy outro.

Two gargantuan belters end the album, beginning with ‘As Black Forms From Grey’, a song of dark and beautiful chaos with many layers of brutal, technical wizardry. It’s a track that barely lets up, grabbing you in a volatile chokehold and sending you spinning through a battering storm of grinding guitars and frenzied, lightning-fast drumming, especially in its eventful midsection. A few more curveballs are thrown towards the end, but pay particular attention to a curious four note flute-like instrument that pops up during the blastbeats. It’s an utterly odd and quirky addition that really shouldn’t go with blastbeats yet seems to melt into the framework like it’s no big deal. The track wraps up with several minutes of finger-flying, hyper fretwork and arpeggio acrobatics.

We end the album with ‘Awake Into Eternal Slumber’, an utter beast of fiery serpentine riffage and dynamic, heart-pounding drum work. The surge of urgent fury that runs through the veins of this track adds a wrathful nature, with riffs imbued with catchy, slithering blackness, yet still manage to be emotive and moody. The back end of the track allows for some quiet reflection and by the time the epic outro of beautifully pained vocals lamenting over melancholic blasting you’re already looking back fondly.

From a band whose name translates to ’empty space’ there’s certainly nothing empty about their music. These tracks are epic, packed with primal aggression and elaborately constructed labyrinths of frenetic, beautifully moody riffs and blistering drum blasts penetrating all the tingly places in any metallers brain.

Tómarúm craft a technically confident sound that is an utterly exhilarating experience. There’s never a dull moment and Tómarúm certainly knows how to keep you on your toes. Production is crisp and polished and packed full of memorable moments with every scintillating riff sending your head spinning with hair-windmill glee. Vocals are outstanding and range from raging screams to Borknagar-esque cleans and Spencer Moore’s commanding, hyper-fast drumming adds devastating brutality to the technical mix.

I cannot praise Ash in Realms of Stone Icons enough and will be keeping an eye out for whatever this band puts out in the future. I believe more permanent members have been added judging by some online information, so their already awe-inspiring music may gain a creative enhancement. It’s an exciting and interesting prospect, but we will see. For now, the duo of Tómarúm have set themselves up to be icons.