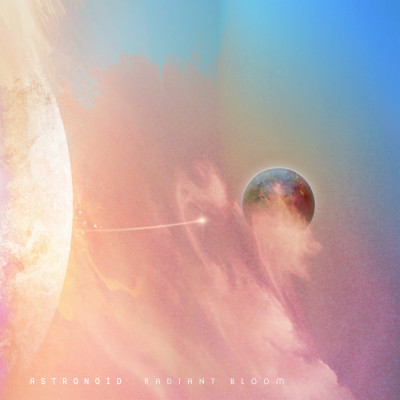 Astronoid have long been an intriguing proposition. The band have always had the sound – christened “dream thrash” in some quarters, it’s a unique mix of fast-paced black metal-esque drumming, ethereal guitars and autotuned, pop punk vocals that blend together very well; not at all the mess that such a description would imply. Yet, the Massachusetts natives have never quite delivered that killer album; debut Air gathered the plaudits, a sterling effort for a fledgling band yet the follow up self-titled album was something of a disappointment, aping their post metal peers rather than blazing their own trail. Now, on album number three, is the time for them to fully deliver on their promise.

Sadly, Radiant Bloom is still not that album. Where the self-titled expanded the band’s horizons, Radiant Bloom narrows the focus; a pummelling distillation of the Astronoid sound. This is joyous to hear; opener ‘Admin’ is an expansive, synth-lead proposition, while lead single ‘Eyes’ carries such a pace its impossible not to get swept along. This pace continues through the crunching heft of ‘Sleep Whisper’, and the paradoxically named ‘Sedative’, perhaps the heaviest track on the album. The band clearly have a great confidence in the music they are plying, and rightfully so; the mix of Casey Aylward’s chirpy guitar tones, Matt St. Jean’s rapid-fire drums and Brett Boland’s abstract vocal delivery is at times absolutely mesmeric.

Yet, somewhere towards the middle of the album, things start to lose their way. The songs become… forgettable. Perhaps that is the point; certainly, the band seem to be aiming towards a detached, cosmic vibe with Radiant Bloom, a wall of sound unconcerned with the thoughts of petty mortals. Yet, everything feels a little one note. For all their experimental tendencies, the band seem unwilling to change the tempo, at least not longer for more than a few notes. Astronoid are not aiming for the peaks and troughs of music; there’s nothing here quite as immediate or anthemic as previous album highlights such as ‘Up and Atom’ or ‘I Dream in Lines’, and that is much to the album’s detriment.

The band claw back some focus with ‘Drown’, a simple track (at least by their standards) but one that blends the band’s pop sensibilities with their need to explore in the most satisfying way. Closer ‘Decades’ is another highlight, another space-faring journey, but one that seems varied enough to carry the listener through its epic soundscapes. Beyond that, Radiant Blooms has little to hold the attention – each track is entertaining enough in isolation but fails to live long in the memory.

This is a shame, as Astronoid are a phenomenal band, with phenomenal talent. The band have a great sound, and clearly still have great song-writing ability, as tracks such as ‘Eyes’ and ‘Drown’ demonstrate. Yet here they seem almost complacent. It’s rare to say, but the Massachusetts natives could do with reigning in their more celestial tendencies, focus on the poppier side of the music, and write some hits, if only to shake up their formula a touch. Until then, Air will remain their benchmark. Sadly, Radiant Bloom falls short.