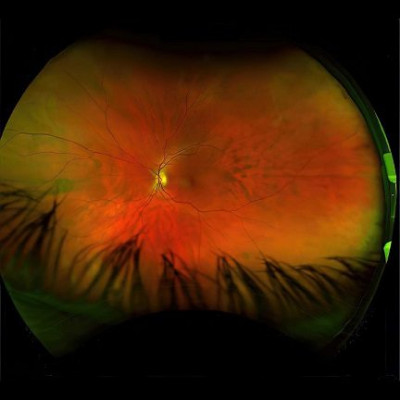 The incredibly prolific Greg Puciato returns with his third solo outing, Mirrorcell. As frontman to The Dillinger Escape Plan, Puciato provided an intensity with his performances like no other performer on the planet. Typically ending shows splattered with his own blood, given his propensity for leaping off everything and anything, the artist is well known for extremes. This was very prevalent on his debut record Child Soldier:Creator of God, which jumped styles in the same manic way he leapt off speaker stacks and balconies, with his former band. But there’s much more to Greg than a crazed stage presence, he has one of modern rock’s finest voices. Now, he has the songs to match.

On Fuck Content, the audio/visual release which came out during the global lockdown, Greg recreated some of the debut’s tracks, but ended the album with the stunning ballad ‘Lying at the Bottom of the Sky’. That song informed my decision to pick this album for review and I’m glad I did, as it’s Greg’s most focussed album to date. Playing all of the instruments himself (except drums), Puciato reveals that working with Jerry Cantrell helped greatly, “I absorbed so much from Jerry over the last two years…helping him with his record and learning his stuff ended up bleeding out of me through my own filter a little bit”. Working with Dillinger Escape Plan producer Steve Evetts, Greg enlisted drummer Chris Hornbrook to help out with some exemplary thunderous beats.

Opener ‘In This Hell You Find Yourself’ is a brief intro of scathing frenzied guitars, not quite ‘Eruption’, but sufficiently viable for inclusion, in Greg’s vision. The booming ‘Reality Spiral’ fires up, a seismic wave of distorted guitars and a heavy chugging riff, in the vein of Dirt-era Alice In Chains. Greg proves he’s one of rock’s finest vocalists with a rasping, sneering melody that adds to the menacing atmospherics. He occasionally rips into a trademark screech that is the aural equivalent of volcanic lava spitting out of the ground. This a raging rocker, but unlike Dillinger Escape Plan, the song keeps an even flow with a solid grind and purposeful focus.

‘No More Lives to Go’ keeps up the onslaught of heavy riffs and the doom-laden tones of Alice In Chains. As he indicated, the recent collaboration with Jerry Cantrell certainly has influenced Greg. The chorus is explosive and angry, as Greg switches up the vitriol and his vocals stretch impossibly. There’s a palpable energy throughout and as the song winds to its conclusion, the guitars rage like a hurricane whipping up anything in its path. ‘Never Wanted That’ takes the volume down a little notch as the liquid guitars tease out a wonderful melody. Greg oozes out a brilliant baritone, showcasing his fine range, and this is the first time there’s a nod to the twang and salacious swagger of Violator era Depeche Mode. The melodic bridge that pops up in the middle of the song is heart breaking and tender before a screeching solo lurches forth over the hefty bass, which has sneakily swollen to a monstrous groove.

The staggeringly deceptive ‘Lowered’ takes flight with a sublime melodic guitar melody before stripping back to a reverb heavy combination of searing guitars, snappy drums and throbbing bass. Code Orange’s Reba Meyers steps up to sing a tender verse before we’re swept off into a powerful duet between the two incredible vocalists. It’s super heavy yet retains a melodic grace, in an ideal world, this would actually be a massive hit, but that’s just not going to happen.

Feeling the urge to try something a little different (as he did on Child Soldier), the guitars take a break for the electro pulse groove of ‘We’ which goes full-on Depeche Mode. Greg whispers and moans between the siren wail synths, twanging guitar and twitchy drum machine. It’s a million miles away from the murderous rebellion of Dillinger Escape Plan, but shows a real versatility in song writing, and I’m fine with that. The schizophrenic chopping of Dillinger twisted my head for the most part, I was drawn to the sparse melodic moments they had. The placement of the track works well in the album, coming just at the right place before things get a little hectic and experimental.

In ‘I, Eclipse’ the bass scrapes the earth with a doomy depth before being joined by clipped drums and a shimmering guitar line. Greg is magnificent the way he can hyper shift from tender croon to manic wail in the blink of an eye. His vocals are occasionally similar to Mike Patton, but Greg’s got more of a throaty rasp as opposed to Patton’s nasal tones. By the end of this track he’s totally enraged and pouring out one hell of a powerful and unhinged performance, as the guitars match the vocal ferocity with an upturn in volume and heavy distortion. Sludgy bass and mangled guitars provide a false dawn to ‘Rainbows Underground’. But the tender verse leans into a chorus that is weirdly melodic with soothing backing vocals, yet Greg absolutely loses his shit with a nasty snarling vocal. He proves himself a dexterous soloist with a whacked out and wa-wahed improvised solo as the track builds into a tumultuous storm of roaring guitars grinding out filthy riffs.

Closing track ‘All Waves to Nothing’ is the most Dillinger like song, beginning with a crazed propulsive groove, as the guitars growl with an off-kilter timing. Greg moans and screeches about “I don’t really like anyone much anymore” and “I don’t really feel like this fucking world anymore…I don’t really feel like I’m meant for it anymore”. The snap to the ensuing “NO!” is pretty disturbing as he retches with a throat destroying frenzy. As he reaches breaking point the track suddenly switches to a lovely soundscape of fluid guitars and crisp drums, it’s a real relief to drop into this tranquil atmosphere from the sheer hell you’ve just been in. Greg then finds his inner Eddie Van Halen and pulls out some stunning guitar work to bring to a close what is actually a really clever track, swerving from chaos to euphoria the way it does. With a final retch unleashed, Greg leads into a stupendous section of soaring guitars and driving riffs that leave you breathless.

After the tangled mess of ideas and schizophrenic switching of styles that constituted Child Soldier, this album homes in on essentially one style and it’s all the better for it. A lot of the reviews of his solo debut pointed out the obvious. It’s good to see that Greg paid some attention to this feedback as this album is a very fine and focussed collection of songs, bursting with vitality largely because of Greg’s ability to sing with such raw energy. He’s also a very talented musician as well as electrifying frontman and performer. There’s some parallels to be drawn between this album and Alice In Chains’ Dirt, and that’s one of my all-time favourite albums. For me, Mirrorcell is Greg Puciato’s most accomplished recording to date and a definite contender for album of the year.