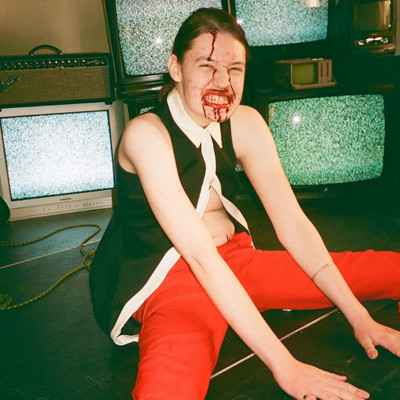 Hey! Pay attention slackers, The Bobby Lees are coming for you with that righteous, low-rent, rock’n’roll. Every once in a while a band comes along with enough personality or imagination, enough weird voodoo or wild eyed psychosis, enough… something that their own twisted version of the same old four piece rock band blah flares with a bright light, comes writhing with chaotic life. Makes your pulse race and you head spin. Y’know, like it’s supposed to. The Bobby Lees are one of those bands. A powerful electric jolt to the heart. A chest-rattling exorcism of garage blues spirits. The Bobby Lees are coming to the UK in a couple of weeks. I’m more excited about that than I probably care to admit. You’d be a fool to miss it.

A couple of years back I picked up their Skin Suit album for review and it totally won my heart, it was probably my album of the year. Something that pure always feels fragile. You worry that all the usual band/industry bullshit will do for them but so far the signs are good. Now signed to Ipecac, which seems like an ideal and supportive home, this EP finds the label slowly introducing their young charges to the world, three of its tracks having appeared online over recent months.

Lead cut ‘Hollywood Junkyard’ draws on singer Sam Quartin’s experience in movies and finds them all too aware of the hollow promise of fame and the pit of vipers they’re trying to keep out of. Driven on by a bass pulse the song careens around a hall of mirrors, tearfully swinging from one distorted self image to another. Its video features the band being drugged and styled, propped up on a stage filled with blank TV’s as the facade rapidly unravels. The EP offers four subtle twists on what they do, stretching their sound world out to something a little more widescreen. The piano led ‘Strange Days’ is a slow burn of growing tension, punctured by a surprisingly pretty melody. It has a vague feel of PJ Harvey about it and shows a continuing desire to play with song structures. Meanwhile ‘Dig Your Hips’ is a straight ahead ripper firmly in the Skin Suit vein, conspiratorial verses giving way to blasts of accelerating guitar roar that end up racing for the finish line.

Pandemic be damned, they’ve also been touring relentlessly and they appear to be surviving that as well. The final track here is a cover of ‘Be My Enemy’ they’ve been playing live. Have to admit, I was not expecting a Waterboys cover. They don’t do much with the arrangement but it’s already a pretty good fit and it allows guitarist Nick Casa a chance to wail a little. If you’re unfamiliar, ‘Be My Enemy’ comes from just before they discovered Irish music and is probably the fiercest rocker in their discography. Seething, paranoid, its lyrics boil with frustration and vivid imagery, a bile inflected denunciation of the political climate of its time (Mike Scott used to regularly dedicate it to Reagan) that feels depressingly familiar and timely almost forty years later.

On the other hand, if you’re the sort of melt who doesn’t want to acknowledge the politics of that choice, here’s a weirdo pop fact for you instead – the album it comes from, This Is The Sea, was released on the same day as Kate Bush’s Hounds Of Love, currently enjoying a moment thanks to Stranger Things. Make of that what you will. Something about music being free of time and place, I don’t know. Hounds Of Love is an amazing album that you can discover for yourself whenever you’re ready to, but if you want to catch The Bobby Lees tearing it up in a small venue then, like I said at the start, you need to pay attention now. Don’t say I didn’t tell you.