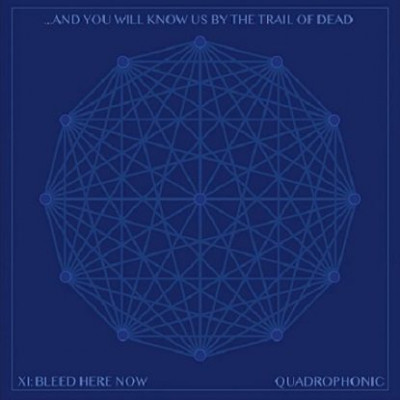 XI: Bleed Here Now by ...And You Will Know Us By The Trail Of Dead

Texan rockers …And You Will Know Us By The Trail Of Dead have been playing their unique brand of manic rock n’ roll for almost 30 years now. They’ve been around the world many times since I first enjoyed seeing them fresh faced, touring second breakthrough album Madonna. I’ve something of a special affinity for them as they love mixing with fans before and after shows and it’s not often you get to speak to your heroes. Lovely blokes they are, despite the implications of their name. Here they are back with XI: Bleed Here Now, another one of those monstrous albums that throws convention out the window. The album has been recorded in quadrophonic sound too if you’re an audiophile who happens to have the luxury of such listening equipment.

This isn’t the first time Trail of Dead have tried this format and you need to be ready to embrace the incredible number of genres and instrumentation that the band utilise. As ever, the two main men, Conrad Keely and Jason Reece lead proceedings, with the usual heady vocal charge. Though the voices throughout are heavily multi-tracked and Reece’s trademark snarl is less prevalent than on previous albums. The musicianship is excellent, from current fellow Dead folks Alec Padron (bass), Ben Redman (guitar and drums), AJ Vincent (keyboards) and John Dowey (guitars).

The conception of this album came about after the band found themselves at a loose end due to the global lockdown. After a period of reflection hiking the hills around Austin and spending quality time with his dogs, Conrad felt it was time to get recording again. But he had the urge to go back to a very basic method of recording, to get the feel of old classic album sounds. So they set up a studio in an old-style Texas barn next to a field on a friend’s property. The set-up consisted of two drum kits (like the old days), three guitar stations so they could swap at will, and AJ’s big wall of synth and a vintage Leslie Cabinet. It’s this beast that underpins the sound of the album, apparently it caused considerable bother for producer Charles Godfrey, due to the harmonious distortion it caused on the barn’s wooden floors.

As usual this album gets going with the old introduction piece. ‘Our Epic Attempts’ features multilingual voices and a mournful piano and symphonic strings that underpin several tracks on the album. Trail of Dead albums have had epic introductions before, but this time it really is truly magnanimous by the end. Then ‘Long Distance Hell’ acts an extension to the intro, with squealing feedback and indecipherable chants. Hey, there’s 21 tracks, we’re in no rush to get this started.

‘Field Songs’ is the first proper song and it’s an upbeat piano and guitar romper that is actually a fairly polite offering, with the punk leanings switched to low. Still unmistakably Trail of Dead though. The poppy ‘Penny Candle’ has pretty psychedelic guitars swirling a gorgeous loop, as the chorus threatens to engulf with a thunderous blatter of drums and raucous guitars and organ. That wonderfully deep organ stays on to underpin the punktastic but proggy ‘No Confidence’, which features a monster groove that Led Zeppelin would be proud of. Inexplicably, the vocals are swamped in a weird drowning effect, it kind of ruins what would be one of Trail of Dead’s finest songs. The epic motif of the intro reappears, and you then get the feeling there’s a concept possibly at the base of this record. It’s utterly ludicrous but utterly magnificent at the same time.

After the vocal shenanigans of the previous song I really was wondering what is going on with the intro of ‘Kill Everyone’. Mercifully, it’s just a wee trick but when the song itself ends shortly after it all feels a tad pointless and sketchy. ‘Growing Divide’ is an acoustic ballad, which Trail of Dead aren’t generally known for. Conrad’s solo work certainly showed he’s capable of being tender when needed and this is a soothing little lament perfectly pitched to bring you back to normality, things have just been a little crazy. But then ‘Pigments’ appears, an odd passage of kooky synths that seem to feature The Clangers on vocals. Epic from the get-go, ‘Golden Sail’ is a swollen wall of sound of organs, guitars, and harmonised vocals, before careering off the desert road into a spaced-out blur of those kooky synths and gospel voices. You have to hear it to get the true gist of what I’m on about. It’s pretty hectic. ‘A Life Less Melancholy’ is a stunning segue of cinematic strings and electronic textures with classical overtones.

‘Taken By The Hand’ goes full on Deep Purple with a seismic organ throb and righteous raging guitars. It’s as if God and the Devil are battling for the souls of our intrepid Texan rockers as the track swerves feverishly from hymnal to heavy rock. In the middle of this sprawling 10-minute mini symphony, there’s a pure voodoo section of bone rattling percussion. Not satisfied, they then feel the urge to try out some folk rock before the soul battle begins again.

With the album being sequenced, unless you’re looking for the joins, it can be difficult to ascertain when a new track has started, the styles within songs and the recurring melodies prove head wrecking. There’s a fleeting moment in the ultra-melodic ‘Contra Mundum’ that sounds like the theme from 80s kids TV show ‘Rainbow’. Interlude ‘Darkness Into Light’ is a gorgeous string laden link pulling in familiar melodies that show just how clever this record is. The soothing melodic tones of ‘Water Tower’ expand with noise in the tumultuous chorus, as the much-utilised Leslie swells the volume considerably. There’s some expert musicianship on display here and the arrangement reaches new heights in terms of throwing so much into the mix.

The playground melody of ‘Protest Streets’ swings over some punchy drums and a smorgasbord of sound. As the song winds along, the voices intertwine, and the genius move of repeating the album’s overriding melody really hits the spot. I’m 99% sure there’s bagpipes in this song, or else these boys have seriously fucked with my senses with their sonic skills. Either road, it’s utter genius. ‘Millenium Actress’ is a stunning and epic song that swells with strings and guitars and the voice of Amanda Palmer bringing a depth to Trail of Dead not normally seen. The band have breached the security of the punk rock blasters on many occasions in their career. Conrad’s solo material has infiltrated this record more than any other in their back catalogue. The song writing and arrangements here are sublime and the effort that has gone into creating this record musty not be underestimated. It’s truly stupendous how each song is bursting with melodic hooks and vitality.

‘Salt In Your Eyes’ is a rollicking stomper that has some roaring vocals that make me think of pirates for some reason. Ending with pure mayhem like their sets often do, the sound of instruments getting pitched into the air and shouts about “check the potatoes” have you scratching your head. ‘English Magic’ is a string heavy ballad that tugs at the heart with a melancholic melody but sits as something of an oddity tagged on at the end of the album.

…And You Will Know Us By The Trail of Dead show absolutely no signs of fading. Their steadfast refusal to conform may be their undoing, but the combination of musical dexterity and visual art and design pushes them into a very unique corner. Having said that, the artwork for the album is the simplest they’ve ever created, Keely’s penchant for fabulous drawings forsaken. They have consistently been producing challenging music yet never got true recognition, in terms of sales, for doing so. For those of us who know, and who have stuck with the band, it has been a brilliant and richly rewarding dalliance. XI: Bleed Here Now sounds absolutely immense and finds the band’s creative fire is very much still burning brightly.