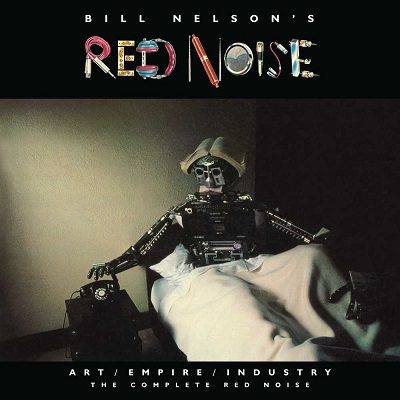 “The old world is burning
There’s ice in my veins
Your breath, it inflames me
It fills me with flames

Now that is a lyric. It has a very Devo-sque texture that XTC’s Andy Partridge could’ve written for them during the recording sessions for New Traditionalists or Drums and Wires. But for Bill Nelson’s Red Noise, this was like a real hardcore stomach punch by moving from the glam-art rock guitar virtuoso into the New Wave/Post-Punk environment at the end of the ‘70s and into the early ‘80s.

That and this 4-CD/2-DVD set consists of the complete Red Noise recordings entitled Art /Empire / Industry: The Complete Red Noise from Esoteric Recordings, takes you back on a trip to remember when. Championed by Steven Wilson who wrote the forward notes on the box set, described Sound-on-Sound; “A masterpiece from an era of so many defining and forward-looking records. As such, it’s ripe for rediscovery.”

Originally released on the Harvest label on February 16, 1979, Sound-on-Sound was like no other. After Bill’s previous band Be-Bop Deluxe called it a day with their fifth and final studio release Drastic Plastic the previous year, Nelson formed the band with his brother Ian on Sax, Dave Mattacks (Fairport Convention) on drums and electronic drums, Be-Bop’s Andy Clark on keyboards and synths, and bassist Rick Ford.

Taking inspirations from E.M. Forster’s The Machine Stops, Aldous Huxley’s Brave New World, Ray Bradbury’s Fahrenheit 451, and George Orwell, Red Noise is like no other music that’ll knock your socks off. And for Stephen W. Tayler, who had done the previous remixes for the Be-Bop Deluxe catalog for Esoteric, this was like walking into the lion’s den for him to tackle the Sound on Sound album.

Alongside both the original and new stereo mixes, there is an amazing live recording of the band’s performance in Leicester at the De Montfort Hall on March 3, 1979, and home demos of Bill Nelson’s recordings in 1978 at the time he was coming up with ideas for the Red Noise sound. You can tell that Bill wanted to move forward from the heavy guitar styles and going for something different to move forward.

Listening to the Leicester recordings that Red Noise did at the time they were promoting the album, you have a front-row seat witnessing the band going into a full-scale attack as audiences become hypnotised for the band’s performances as they go into ‘Don’t Touch Me (I’m Electric)’, the punky Van der Graaf approach on ‘Possession’, and the mellowed out turned chaotic carousel adventure for the ‘Superenigmatix’.

There are some elements in Duty Now for the Future as they join Devo’s Smart Patrol in the styles of ‘Clockout’ in an attacking composition to bring audiences to a standstill by transforming themselves by ‘Revolt into Style’. You gotta love the call-and-response between the wah-wah bass and sax before Bill takes them back to the Halls once more by landing back to Earth again.

Now onto the new mixes from Tayler. Stephen brings a lot of maximum approaches for his take for the Red Noise recordings. And let me tell you, alongside his mixes between Be-Bop and Van der Graaf Generator, this one is a real corker! Understand, there will be a dividing line in the sand where people will accept Tayler’s mix or not. Some people will go for the original, others will go for the new mix.

But let’s get into this bad boy. You have the dystopian walk into the uncharted malls of America with buying a lot of stuff you need for your house, room, or apartment with some ‘Furniture Music’. Clark brings the visions for Nelson’s vocals and riff structures throughout what is going on to clean up all the clutter you have and make it much cleaner and calm.

Then it’s a dive into the B-52’s territory with hay-wiring synths by reaching the skyscraper on ‘Out of Touch’ while the sonic alchemy drive of XTC’s ‘Making Plans for Nigel’ and ‘Helicopter’ that comes to the forefront as Tayler brings the instruments to the forefront with Bill’s blistering guitar midsection solo work from ‘The Atom Age’. The tidal waving effects that Clark brings on the ‘Wonder Toys That Last Forever’ walks into a ska/reggae approach to add that punch for Rick to do a little slap bass section.

The opening track, ‘For Young Moderns’, ‘Stop / Go / Stop’, and ‘Out of Touch’ has some strong resemblance to The Cars sole self-titled debut while ‘Stay Young’ sees The Damned transforming themselves into a late ‘60s garage-rock electro group in the styles of Question Mark & The Mysterians with some killer harmonica, guitar, and sax improvisation. The demos recorded by Bill in 1978 at his home, showcases the work-in-progress compositions he was working on.

Yes it is rough, but you could tell that there was magic in those recordings. And yes Bill does play drums to give the band members some ideas and directions on how he wants to approach the songs. He may not be the best drummer, but he’s very much like a school teacher giving students an inside background during the genesis of Red Noise.

There’s an extra keyboard and guitar section on ‘For Young Moderns’, the ‘60s sci-fi b-movie twist on ‘Out of Touch’, a Hawkwind-sque approach with an Amon Duul II style for a roughed-up version in a ‘A Better Home in the Phantom Zone’ with some nods to the Yeti years, and the epic-movie like introduction that begins with a massive roar to be ‘Acquitted by Mirrors’.

Nelson’s liner notes gives an insight history over the making of the Red Noise debut release, and retrospective on how he feels about the album. And he makes a valuable point where he says, “It still holds its head high and has become a favorite with fans, yes, even the ones who might have found it a little challenging.”

The thing with Nelson’s music from Be-Bop Deluxe to Red Noise’s career, it is like a divided line the sand. Whether you get it or you don’t, you have to appreciate the accomplishments on what he’s done to bring Sound-on-Sound to life in this incredible box set. And what I love about Esoteric is that they include the original mix also in this set. Because they’re not trying to re-write history, but staying true to Nelson’s visual stratosphere and bringing his creation to life.

So if you’re new to either one of Bill’s career, be prepared to be a part of this brave new world to enter into the Art, Empire, and Industry landscapes of Sound-on-Sound.