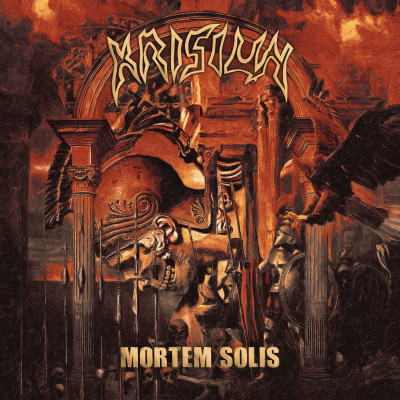 As if the world needed any more of them, Krisiun have become grumpy old men. It isn’t that big a leap, if we are being analytical: death metal is pretty ill-tempered by nature and these three Brazilian brothers have been barking out a particularly straightforward version of it since 1990. They are pretty old.

But the quotes from guitarist Moyses Kolesne that accompany this release – their 12th – seal the deal. He speaks of fresh ideas that came to fruition partly because of the two-year hiatus due to the pandemic, but also because “we saw the metal scene becoming more commercial and fake”. Oh yes, bring it on, Moyses – we haven’t this sort of chuntering since Manowar. He goes on: “We see a scene of poserism. Death metal is getting soft. We’re not going to become anything like that. As an older band, we keep it real, and that’s our mission right now – to bring real death metal back.” Kids these days, etc etc.

The album was recorded by getting the three siblings – Moyses and drummer Max Kolesne, along with Alex Camargo who plays bass and roars – together in a Sao Paulo studio and play without the aid of computers or click tracks (“the crutches of modernity,” Moyses snarls. Honestly, if mere click tracks get him this riled, I shudder to think what living in Brazil under the rainforest-razing, homophobic, quasi-fascist president Jair Bolsonaro does to him).

The good news for us is that they channel their anger at the state of their beloved death metal scene into 10 relentlessly brutal tracks. There are few surprises – after 11 previous albums, you kind of know what you are getting with Krisiun – but they do sound revitalised and, yes, absolutely furious.

It is more aggressive than their last album, Scourge of the Enthroned, and opens with three blast-beat-soaked numbers in ‘Sworn Enemies’, ‘Serpent Messiah’ and ‘Swords into Flesh’. They roar by in a maelstrom of noise and we are finally given a small window of respite by the groovy introduction to ‘Necronomical’, the title of which could easily be a key part of Bolsonaro’s re-election manifesto.

Pockets of groove pop up elsewhere in the album, such as in ‘Tomb of the Nameless’ where Max Kolesne blasts away while his two brothers indulge in a Pantera-ish riff, seemingly oblivious to the ferocity of Max’s timekeeping. It works.

But apart from a short instrumental interlude in ‘Dawn Sun Carnage’ (one of the most unnerving tracks on the album, as it sounds like the soundtrack to a sacrifice) the album is basically 40 minutes of fury. Extremely well produced fury, it must be said – the band enlisted a new production team and they resisted the urge to compress the instruments and as a result it sounds clear and with none of the claustrophobia that haunts so much heavy music.

But by the final track, ‘Worm God’ the listener is so pummelled that they are desensitised to the zillion-beats-per-minute approach. We can do little more than shrug to lyrics like “Terrifying ages of starvation’s mark. Dissolution of hope, the universal faith fades to black. Cities crumble and fall overpopulated”. And of course, our apathy to the anger delivered could serve as a metaphor for the general population’s attitude to the bin-fire that is the world itself. Maybe the planet does need more grumpy old people.