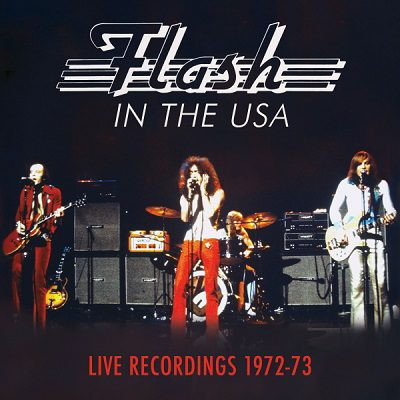 Flash were one of the most unsung bands to come out of the progressive rock movement to come out of the golden ages from the 1970s. After Peter Banks left Yes following the release of the band’s second 1970 album, Time and a Word due to artistic differences, he formed Flash in August of 1971 with singer Colin Carter, bassist Ray Bennet, and drummer Mike Hough. They released three studio albums (Flash, In the Can, and Out of our Heads) from 1972 to 1973.

They’re often at times under the radar, and probably known for their minor hit, ‘Small Beginnings’ which went to number 29 on Billboard’s 100 chart. This 3-CD set from Think Like a Key Music, showcases these rare live recordings Flash did on their U.S. tour in New York, New Jersey, Indianapolis, California, Florida, and Massachusetts.

One of which was their appearance on NBC’s late-night TV concert series of Burt Sugarman’s The Midnight Special with ‘50s rock ‘n’ roll rebellion Jerry Lee Lewis introduced them. He described them as “Heavy, loud, and fast. If they can’t get it, it can never be forgotten. And they call themselves the Flash and they can Flash it in!” And boy Jerry was right about them.

From the waltz-like intro with Peter’s wah-wah pedal, Ray’s picking-walking bass line on his Rickenbacker before waiting for the sun to hit on ‘Dead Ahead’, it gives the band all of the ammunition they need to go into this full-scale attack for Banks to fly towards the sky with Carter’s beautiful vocal lines. We then head back into an FM Radio broadcast of the band’s performance in Hempstead at Union Studios where Hough lays down his intensive jazz exercise for the 10-minute epic, ‘There No More’.

You can imagine Mike taking aspects from Buddy Rich, Bill Bruford, and Art Blakely. There’s some strong connection to the jazz sound Hough has in his heart. And boy can he play the drums like no other. The unexpected time changes, Vince Guaraldi-sque arrangement to make the Peanuts gang rock out to audiences with carousel twists, return to early Yes, and hard rocking attitude.

I can imagine the audience were quite jaw-dropped from what they were hearing and understanding why Flash were so far ahead of their time. Understand, these recordings have a raw sound because of the circulated source of audience recordings and in cassette format. But despite the qualities from the various locations they were performing in the states, they were going to give it all they got.

The opening track from CD 1 of ‘Black and White’ becomes a standout at the infamous club called My Father’s Place on the first of August, 1972 where the band go into this eruptive cannon blast thanks to harmonising vocals between Banks, Bennett, and Carter during the balladry section of the song.

Peter deserves a lot of credit. It shows more of his creative energy by creating these sonic attacks on his Gibson ES-335 Electric Guitar. From the moment he plays these heavy riffs, arpeggiated arrangements, and swinging grooves, he’s very much like a conductor leading the band member’s directions on where he wants them to come in, and bringing it all home until the very end.

It shows that he’s more than just one of the original founders of Yes, but Banks can knock it out of the ball park like no other. He’s not trying to be like Steve Howe, but having his own sound, and showing his true self to audiences during the 1972-73 tour. And it’s off to Miami’s Baseball Stadium where they opened for Three Dog Night as they bring in the thunder of the ‘Children of the Universe.’

Again, the sound quality isn’t perfect as I’ve mentioned before, but despite the muddy quality, Flash give the crowd a big jolt of electricity for a home run during the chugging sections between Peter and Ray creating this steam train going from 200 to 500 miles per hour. And then up to Cape Cod with Clint Bahr’s brother made a recording of the show at the Coliseum where Flash bring everything to an end from their Out of our Heads album.

They go from the soft to spaced-out voyages into various planets by meeting ‘The Bishop’ to enjoy a snowstorm and tidal waving approach into a sinister approach on a ‘Manhattan Morning (Christmas ’72)’. You can hear a little pre-nod to Rush’s ‘YYZ’ at the very end of the second and final track from CD 3. I can imagine that Rush took notice of the song and paid homage not just to Crimson, but to Flash as well.

The 32-page booklet contains rare photographs of the band on the road in the states, newspaper articles, billings of the clubs, conventions, and festivals they appeared in, and liner notes with interviews from Ray Bennett, Colin Carter, and Mike Hough. It’s time to give Flash the proper handshake they deserve by walking into a time machine and being in that audience for those tour dates and give them the credit they finally deserve.