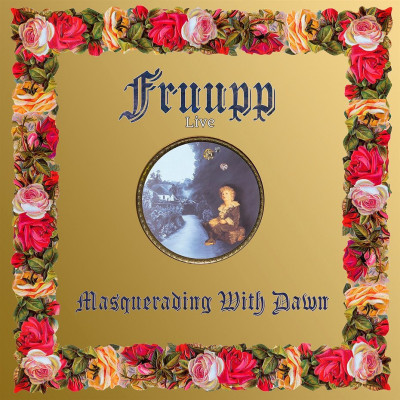 Masquerading With Dawn by Fruupp

15 years ago something extraordinary happened, I was still in College at the time, still delving more of my toes into the world of progressive music. It was the summer of that year and I remember my Mom buying me this special issue from Classic Rock Magazine when they were covering the story of the prog genre (Pre-PROG Magazine during this time frame). But it opened my eyes more and revealing that Prog-Rock was more than just Yes, ELP, Genesis, Rush, and Jethro Tull.

I came across an article in the issue that the late Malcolm Dome wrote about. It was called, “The Best Prog Bands You’ve Never Heard!” Most of them I knew about alongside Focus, Gong, and Gentle Giant. But there were others that I didn’t know about. Thanks to Dome’s article, I discovered bands like; Gryphon, Jonesy, Third Ear Band, Greenslade, and a peculiar band that caught my attention of this group from Belfast, Northern Ireland called Fruupp.

Formed in early 1971, they were signed to the Dawn label and would release four studio albums from 1973 to 1975 (Future Legends, Seven Secrets, The Prince of Heaven’s Eyes, and Modern Masquerades). I remember being intrigued by their music after hearing one of their songs on YouTube.

Their music was quite a unique sound. It had these pastoral, symphonic, and storytelling structures that have these visual imageries come to life, told in a sung-through gem from start to finish.

And thanks to the 2009 reissues from Esoteric, they took me on this ride with incredible movie-going experiences including The Prince of Heaven’s Eyes which I always see it as a 2-D animated movie in the styles of an underrated classic from 1994’s The Swan Princess and Don Bluth’s animated musical, Anastasia.

The band considered former member Miles McKee on vocals, Peter Farrelly (who would fill Miles’ place) on Bass Guitar and Lead Vocals, Martin Foye on Drums, Vincent McCusker on Guitar, Stephen Houston (who would later leave the band to become a Methodist Minister after the release of Heaven’s Eyes) on Keyboards, followed by Stephen’s replacement, the late John Mason during the Masquerades-era.

It’s hard to believe that while Fruupp never got the recognition they deserve, and shared the bill with Pub Rockers’ Bontemps Roulez, Medicine Head, Kevin Coyne, and of course legendary rock group Queen at the Friars Aylesbury club, this 2-CD set is a recording of the band’s performance on a Saturday Night, December 6th, 1975.

This was around the time they were promoting their fourth and final studio album, Modern Masquerades. For audiences, this was an early Christmas present as Fruupp were sharing the bill with Tír na nÓg’s Leo O’Kelly.

With the help of crowdfunding thanks to The Fruupp Facebook Group, you can just close your eyes and vision yourself back at Friars supporting the band’s performance. Understand while the recording has a rough quality, it is a piece of history to show how much electricity there was at Friars, and the audience’s stamp of approval of the quartet’s night of all nights on a Saturday they’ll never forget.

From the Focus-inspired of majestic beauty tackling ‘Sheba’s Song’ which would later be sampled by rapper Talib Kweli featuring Norah Jones on ‘Soon the New Day’ from his 2007 release Eardrum, to the introduction of the friendly hero Mud Flanagan with a narrative spoken intro before kicking it in to a Mellotron-like turned militant before transforming into this mellowing spiritual journey on ‘It’s All Up Now’, you can tell the band are having a blast.

They’re playing in this mid-fast tempo beat of the song than what it is in the original studio version. And let me tell you, the moment they go into that midsection, it becomes a brighter shift of light that becomes bigger than ever as McCusker lets his guitar go higher and higher before Mason and Foye are digging frantically to reach that light at the end of the tunnel for audience’s applause.

And then it goes into a full-scale attack after Mud is introduced to the ‘Lord of the Incubus’ with McCusker and Foye dueling with each other before it calms down in the battlefield for Peter detailing the revolutionary man taking his comrades into battle, but he’s using them for this big giant lie by taking over the city as John goes in for the kill by creating this swirling midsection.

Then it becomes a twisting Blues-Rocking 12-bar improv before heading back into the Toccata fields once more. Once the audiences cheer for ‘Annie Austere’, the rhythm section kicks into gear with McCusker lending the angelic beauty coming through the window pane and taking Mud by the hand, viewing the world that she lives in peace and harmony.

But it’s ‘Mystery Might’ that just grabs your heart nonstop. You feel the tension, the militant drum work Foye does, synthesised and organ hay-wiring work from Mason, and wah-wah craziness that gets the band into a frenzy. Peter leads the charge by creating some intensive walking bass lines like a conductor with directions that lead to the right path.

Just as the audience claps along to the opening of ‘Decision’ from 1973’s Future Legends, they know the stories are worth the adventure inside the club. It goes into the intensive attack before going into this walking combination of a jazzy vaudeville groove in the styles of Thelonious Monk, Alice Cooper’s ‘Some Folks’ from his conceptual opus Welcome to My Nightmare, and Flash’s Peter Banks rolled into one.

The album contains a booklet written by Robert Cochrane about the discovery of the tape. According to Paul Charles, lyricist and manager of the band, the Friars club was recorded with a mobile unit for a possible live release. Unfortunately, it never saw the light of day. What happened was that the tapes were destroyed in a fire and that was almost like getting punched in the stomach, very hard.

But then a miracle happened. A fan named Roger Pettit who was an attendee of the band’s performance at the Friars venue, recorded the entire performance on tape. It proved that the Phoenix’s can fly up into air so high as the recordings of the show were painstakingly remastered and repaired by Alan Lowles at Airtight Studios in Italy last year.

For Fruupp heads, it brings the circle in full. As I’ve mentioned earlier, you can just close your eyes and imagine it’s 1975 all over again, watching the band bringing the Friars club, a ginormous early Christmas stocking of incredible music in all of its glory. So it’s time to get down on your knees and give the Modern Masquerades the warm reception they deserve.