(((O))) Review: Anima Morte – Serpents in the Fields of Sleep 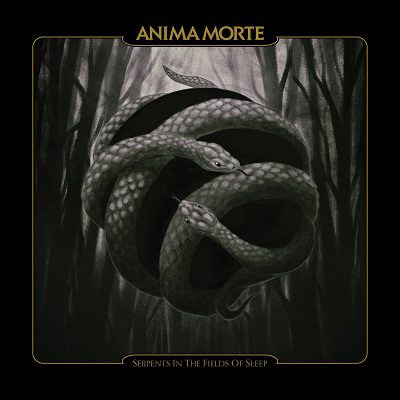 Serpents in the FIelds of Sleep by Anima Morte

Now, I don’t recall the last time I heard from the cinematic voyage of Sweden’s own Anima Morte. It’s all a blur to me since I previously listened to their last two albums; The Nightmare Becomes Reality and Upon Darkened Stains. But it’s been nearly nine years since the band put out a new album. And with Halloween coming upon us to close off October, they decided to dust off their instruments and come back swinging by unleashing Serpents in the Fields of Sleep.

Released on the Cadabra label, Morte have brought in enough dinner services for their customers by keeping them satisfied of a gothic menu, that’s certainly to dine over, nonstop. ‘Leaving Redemption Behind’ opens the album off with a synthesized workout. With Möller’s galloping drumbeat, Cannerfelt’s surf guitar in a reverb effect, and an impeccable twist to the score of The Virgin Suicides and the theme to the Canadian sketch comedy, The Kids in the Hall.

Quite an oddball mix to start the album, but it works to keep the ball rolling. Meanwhile on ‘Blood of the Iconoclast’, they take influences of the score to Lucio Fulci’s 1981 classic, The Beyond. Klingwall gives Ekström and Dager, this big challenge on the string section to go in for the kill while the guitars climb up and down the stairs like a wolverine who’s high on angel dust, ready to attack its next victim in a massive gorefest, waiting to happen!

On ‘The Underworld Beckons’ and ‘Night of the Final Act’, they make their own pathway to the golden-era of 1930s Hollywood where everything becomes a ticking time bomb, waiting to explode. When the riot starts to break out in the middle of a premiere, it’ll make you think of the shocking climax of the 1975 satirical drama turned horror film in disguise called, The Day of the Locust.

Hearing the composing themes that Granberg would bring, followed by the strings and Ohlsson’s percussion instruments, it sets up this deadly aftermath from Tod Hackett’s perspective of The Burning of Los Angeles with goyaesque figures coming to life from the paintings he created. And for Morte, they vision West’s view from what is occurring in front of Hackett’s eyes.

The militant themes on the ‘Seeds of Trepidation’ makes it a gateway to honor the early years of Franco Battiato’s Fetus years by going for the jugular as they walk into King Crimson’s territory for a brief moment before the angelic jazzy metallic choir brings everything to the forefront.

Anima Morte’s music may not be everyone’s cup of tea per se, but this is where they finally come together and make the most effusive release that’ll astonish, shock, and startled listeners for its true giallo-like flick, brought to life on the silver screen.