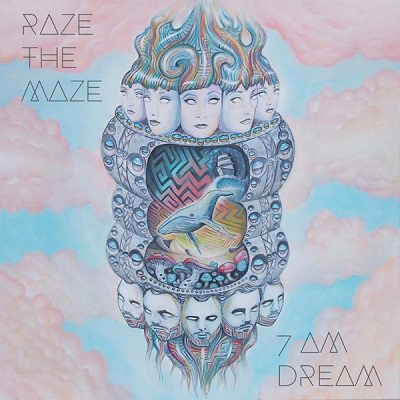 7am Dream by Raze The Maze

After MoeTar came full circle four years ago after the release of their final EP Final Four and having two studio albums in the can from Magna Carta Reords, Tarik Ragab and Moorea Dickason have returned to the Bay Area prog scene with a massive kick in the family jewels with a new project called, Raze The Maze.

According to their website, Raze The Maze is seeking the internal maze of fear-based corporate driven culture and raise up creativity, connection, and expression in its place. They released their sole self-titled debut in 2019 so far. And now in 2022, they’re following it up with their second album 7am Dream.

It has the spirit of MoeTar’s legacy and the elements of chamber pop, avant-prog, and sheer attitude that is brought to the kitchen table. The visions on here, have odd time changes, spirituality, brainwashing corruption, and the crazy-ass shit that’s been going on during the pandemic two years ago and into today.

From the continuation of songs such as ‘Under the Spell’, ‘Hero Villain’, and the title-track, they continued where they left-off from MoeTar’s ‘Butchers of Bagdad’ and the ‘Entropy of the Century’. You can tell that the duo have made a reprise by returning and concluding the stories by bringing the final chapters into their compositions.

And they have a real psyche of the band’s mystery, adding a twist of lemon into their homemade lemon pie. ‘Persistence’ is a tip of the hat to Zappa’s Uncle Meat-era with escalating grooves to whirlpools of synths, Hanson’s bassoons jumping from one crocodile head to another, and Ragab conducting him to go crazy at the very end.

Then, all hell has broken loose for Moorea to transform herself into a vicious, snarling blood-thirsty beast by reading the ‘Letters from the Parking Lot.’. Both she and Tarik race up to the spiralling staircase with crazy textures that have a blistering effect, and right in front of your face as he channels the styles of Alex Lifeson’s arpeggiated powder-keg with a Mother Goose twist in the styles of ‘Mary Had a Little Lamb’.

7am Dream is an enthralling roller-coaster ride from start to finish. It proves that both Moorea and Tarik are keeping the machine going, and never touching the stop button. It’s an album that’ll keep you on the edge of your seat.