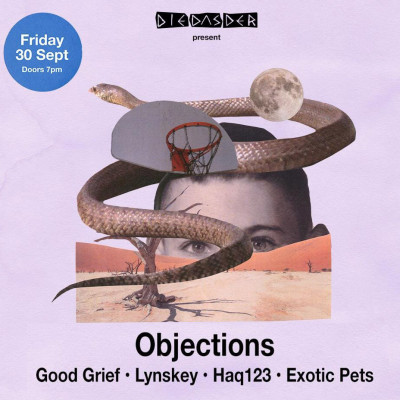 It’s Friday night and autumn is making a dramatic entrance. It hasn’t rained like this in so long I’d almost forgotten it could. Cats, dogs, stair rods, it is absolutely hammering down. Here, in the city of eternal summer and the commonwealth games and all. I’m rattling and splashing down to Digbeth to see hot new Leeds sensations, Objections. Maybe they brought the Yorkshire weather along with their packed lunches. Thanks for that, friends. They’re heading up a stacked bill of punk rock contenders. Or the echoes of what once was punk. You know how I love a bit of the punk-not-punk rock.

First up tonight are Exotic Pets who allegedly live in the building somewhere having escaped their inadequate cage. There is a bit of a ‘gig in the front room’ aspect to it, the band assailed by random questions and shouts of amusingly faint praise from friends in the crowd. Muthers is a rehearsal studio and performances here tend towards this relaxed atmosphere, particularly for local bands. It’s friendly and comfortable but it can be a mixed blessing, especially when your dotty aunt keeps spraying air freshener everywhere ‘cos they “cannot abide the stink of cigarettes”. Anyway, Exotic Pets have a cool flower-shaped bass, some nice guitar parts and a song about armadillos, which is the least they could do given their name I suppose. They’re better than my limited exposure to ‘Hot Boys On Campus’ suggests and while they might not have fully worked out their own identity yet, they have at least managed to avoid being anybody else. Strong start.

Next up local youth team Haq 123 are launching their new album. Their sixth in six years, putting pretty much everybody to shame on the productivity front. Six Sick Hits features a nod to Iron Maiden on the cover but their own metal is sludgier, rougher, weirder. Millie scolds those troublesome smokers some more on ‘How To Look Cool’ then makes dubious claims about unearthing human remains in the back garden. A couple of blasters into the set and they get strange with album-closing odyssey ‘Yellow Cult’, melting and expanding their sound with a little sneaky cosmic jazz.

We’re brought back to earth as the promoter takes the stage “If the owner of a silver Skoda, registration number…” Perfectly, this turns out to be the headliner’s ride and Joe heads swiftly for the door. ‘Mind Control 2022’ sees Haq revisit a previous creeper (from second album Heavy Mess) applying the electrodes for a burst of pace. It marks a turning point in the set between new and old. They dash off a couple of other beefed=up early numbers and close on “classic of classics” ‘Ugly Baby’, still their biggest crowd pleaser.

Lynskey are a nervy two piece from Manchester. They play a kind of compressed dance punk with some surprising moments. Nu metal arriving unexpectedly in tight, torn, jeans. Their drummer must be sweltering in that woolly hat. The rail-thin singer might burst. Or snap. They go at their songs with a chaotic energy, like they matter. Which is nice. Working out your shit while making a right racket is kinda what punk is for, no?

I like the name Good Grief, it’s comically mild and downtrodden. Their bandcamp also bears the legend ‘Hüsker Don’t’ which is just asking for trouble. I’m sure I’ve seen Bob Mould as Charlie Brown somewhere but the internet only throws up one, fairly unsatisfactory, image. Get on it niche meme types. I expect they’re playing this year’s Shake Your Faith album, which I have enjoyed but don’t know well enough to pick out any of the songs. I liked it better than the live experience which is a bit indistinct. They’re a band that takes a bunch of stuff you like and make a familiar paste of it, even they seem a bit bored. Clearly they are not Hüsker Dü, which is not the greatest excuse.

Still something of an unknown quantity Objections prove themselves worthy headliners. A trio comprising two thirds of Bilge Pump and fronted by Claire Adams (Beards, Nape Neck) they’ve been around for about a year but so far have nothing available to check out beyond a recent radio session. As such, reputation and word of mouth have worked overtime to pull a respectable crowd down for their first visit to Brum. We are not disappointed. Claire’s voice and nimble basslines lead the songs, Neil Turpin’s drumming is flowing and dependable as ever while Joe Mask fills out the sound with some extraordinary twelve-string guitar noise; not bludgeoning rock noise but managed bursts of distortion that flow around the other two. It’s a fine noise. While not a radical departure from their other bands Objections feels self contained and confident. The record they’ve been working on is sure to turn a few heads and I can’t wait to hear it.