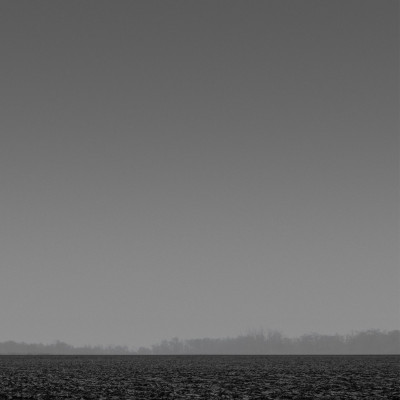 If you are looking for slow plodding, dark sludgy doom with hints of black metal, menacing atmosphere and sojourns into instrumental experimentation then Onhou’s new release Monument might be just the thing. This is Onhou’s sophomore release and they continue to make you feel uncomfortable with their heavy brand of grim and oppressive music. As the minutes tick by in their songs, the weight of the aural anguish gets heavier and heavier each moment. The album’s art depicting a grey featureless landscape is an apt metaphor for what is contained within Monument. It is a singly focused journey into the bleak.

There are only four tracks on the release, but each one clocks in over 8 minutes. The opener ‘When On High’ begins with a catchy upbeat drum beat but it is merely a tease, as moments later the rest of the band cuts in and the real direction of the song becomes instantly apparent. The “doom” vocalist/guitarist Alex’s voice is deep, strained and sullen like a stoic warrior’s growl before battle. His guitar tone is biting, aggressive and distorted, the bass notes (by Henk) are elongated, low and gravelly. The potential of pleasantness from the brief drum intro (by Arnold) sours into a slow, methodical cadence punctuated by clattering toms and crashing cymbals. Some of Onhou’s black musical palette and unique sonic character come from Florian. He provides the black metalesque shrieks and the atmospheric gloom that lurks in the mix via keyboard.

Throughout the album Alex and Florian exchange verses providing a constant peppering of different vocal intensities. I found these contrasting vocal styles and tones to be quite compelling.  The long tracks start, stop and weave through many tempos and creative passages. “When On High’ has an ominous melody that builds into a long, intense instrumental groove with tense keys and sputtering guitar hits while the rhythm section drives the track forward. It is an impressive opening for Monument. Any reprieves from the blanketing doom within “When On High’ linger only momentarily before they are routed over and over by its unrelenting asphyxiating gloom.

The next track ‘Null’ opens with distorted guitar tension and a killer bassline by Henk. The track has a ponderous pace and it brims with atmosphere and melody sounding more like angry post-metal. The lyrics are haunting:  “I’ll break the chains that hold/ And I’ll refuse to accept your faith/ I will stand my ground/ And I will face the awaiting white/When I am dead // You’ll embrace the void/ And will have nothing to hold upon/ You’ll go down with me/ There will be none that will reach the sky/ When all is dead// This is where it ends/ There are no eyes here”. Ooof. Maybe don’t play this for your kids.
There is a long atmospheric outro that feels like it is out of a creepy, sci-fi thriller. A scene where the protagonist makes an eerie discovery and there is no escape as the darkness of space closes in. Everything getting darker, darker…

Onhou ventures deep into experimentation weaving ghoulish moods on the next two tracks, ‘Below’ and ‘Ruins’. ‘Below’ is a track that is so caked with grimy atmosphere that it will make you want to take a shower. It is dotted with Black Metal screams and sour keys that manage to cut through the layers of gray. The track is very expansive, evocative and cinematic relying more on creating a perilous soundscape than creating a typical harsh melody. ‘Ruins’ is a journey with melodic doom drenched in strained keys and sinister alien atmospheres. It’s a grim one. The guitars sound like they are descending into a black abyss as the vocals chant: “This death is ageless/ This death has decayed once/Still now it’s dreaming”. Frank de Boer (Farer/Ortega) lends his voice to the outro on this lurid, horrific track. You’ll want to keep all your lights on for this one.

Onhou’s Monument is quite the stark trek. The band creates some incredibly powerful and morose music that seeps a grim sonic bile and aphotic atmospherics. Beyond the unmistakable dark cinematic quality of the music, there are also heaps of bewitching melodies and harsh riffs that accompany it. There is a lot to take in and digest on Monument. I recommend finding a well-lit room and letting Onhou’s stunning creativity douse your mind and body in some fine doomy goodness. You may however, never be the same again…