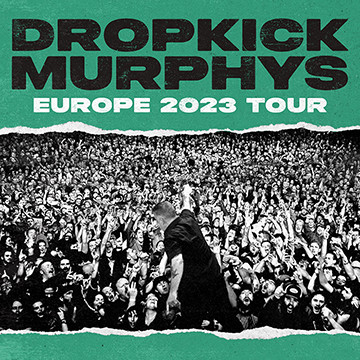 The spacious environment of the Victoria Warehouse in Manchester may be a far cry from the bars of Boston, but it is nevertheless here that the Dropkick Murphys stop by on their latest jaunt. Postponed for near-on two years due to the pandemic, they have certainly not scrimped on their tour budget and come readily armed with three support bands in tow, ready to whip up an eager audience into a frenzy.

The icy blasts of weather resulting in a late arrival means the opening act Jesse Ahern is missed unfortunately, although a second chance to see him does pop up later, so it is down to Australian band The Rumjacks to kick-start this reviewers evening with their rather raucous Irish punk. An entertaining bunch whose songs keep threatening to turn into ‘Sally MacLennan’ by The Pogues at any given time, the sight of frontman Mike Rivkees spinning around the stage playing his penny whistle is enough to stir the quietest souls. A band to watch out for.

Pennywise, on the other hand, may eschew any sense of rebel folk songs in their set but they are nevertheless full of righteous rage, which no band of their vintage has any right to be. With a set culled primarily from their 90s’ heyday, they don’t mess around in giving the audience what they didn’t think they needed. Chunky hardcore riffs, mixed with the lyrical fury entice a few hardy souls to attempt a circle pit, and by the time they hoot a home run with classics ‘Fuck Authority’ and ‘Bro Hymn’, they have won over a considerable part of the audience.

Dropkick Murphys are something of a slick act these days and whilst they lack some of that punk energy now, they make up for it with sheer bonhomie. With a set primarily taken from their two recent albums, Turn Up The Dial and the Woody Guthrie inspired This Machine Still Kills Fascists, they still find time to mine their now deep catalogue for plenty of fan-favourites. Not that you would recognise any difference as each song is reacted to like an old friend; such is the goodwill that exists between both band and fans, it makes for a rather convivial atmosphere.

Taking too the stage to the strains of ‘Foggy Dew’, they soon whip up a storm with the anthemic ‘The Boys Are Back’. A quick burst through ‘Good As Gold’ before ‘Blood’ ignites the crowd even further, the energy levels are raised higher each time. Even the introduction of the more acoustic based tracks from the new album continue to keep the energy up as both band and fans exchange sung-out-loud lyrics to each other.

The dedication of ‘Worker’s Song’ to all those currently out on strike is a stark reminder of the political nous of this band, and the inclusion of Mike Rivkees from The Rumjacks is the start of a section of collaborations, where they invite on stage Jesse Ahern for an acoustic version of their old classic ‘Barroom Hero’, and a rather wonderful Jaime Wyatt on new song ‘Never Git Drunk No More’. That they also throw in a tremendous ‘Mick Jones Nicked My Pudding’ in the middle of all this makes it a particularly enjoyable part of the show.

From then on out it’s a run through the classics with ‘Johnny, I Hardly Knew Ya’ and ‘I’m Shipping Up To Boston’ seeing out the main set, with a neat cover of ‘Dirty Old Town’ thrown in for good luck. Everyone knows what to expect on the encore, and a mass singalong of ‘Rose Tattoo’ raises the atmosphere even higher. Jaime Wyatt joins them once more for ‘The Dirty Glass’ before a riotous ‘Kiss Me, I’m Shitfaced’ finishes off the evening in style. As the band leaves the stage, frontman Ken Casey remains to fist bump as many people as possible, before we all leave into the cold Manchester air. It may only be January, but a contender for gig of the year has been thrown down.