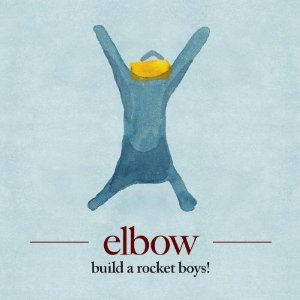 Here at Echoes And Dust there are a number of reasons why we have a huge soft spot for Elbow but principle amongst them is that ‘Seldom Seen Kid’ was the very first album we reviewed on the site. In the intervening three years they’ve done pretty much nothing while we’ve gone on to collect numerous awards and international celebrity…oh, hang on, that’s not right is it? Joking apart though, as much as we loved ‘Seldom Seen Kid’ we had no idea, and I suspect nor did they, that it was going to launch them on the sort of trajectory that it has and elevate them to arena level gigging.

What this all amounts to is a somewhat heightened level of interested, and thus pressure, in their new album. In response to this pressure I imagine the temptation to produce a whole album of stadia friendly, record company pleasing, soaring anthems a la ‘On A Day Like This’ would have been extreme, so it is extremely reassuring to find what Elbow have done on ‘Build A Rocket Boys’ is produced another great Elbow album; imbued with wonderful warmth, wistful melancholy, glorious melodies and loaded with pathos.

On the face of it, Guy Garvey is an unlikely rock hero. Slightly sloped of shoulder, dishevelled of appearance and with his everyman voice, not technically the greatest singer yet utterly compelling all the same, yet he is carving himself a niche as the Mike Leigh of music with an incredible ability to take the everyday mundane and transmute it in to something poignant and wonderfully uplifting and that talent, that eye for the exquisitely ordinary, underpins everything on ‘Build A Rocket Boys’.

The album starts oh so gently with ‘The Birds’, as song that creeps in to the room initially but then over its eight minute duration gradually grows in stature and swagger until finally blossoming in to one of Elbow’s trademark soaring, sweeping climaxes, a wonderfully life affirming way to open the album, and indicative of the band’s confidence that they can kick off with such a slow burner rather than heading down the instant gratification route.

‘Lippy Kids’ brings things back down to Earth, an affecting reflection on boys growing up and the observation that one does not necessarily appreciate how good life is at the time when one has the most energy to exploit it, ‘Build a rocket, boys!’ indeed.

This tug of war between the grandiose and the intimate continues throughout the album, occasionally with the same song, the foot stomping lead single ‘Neat Little Rows’ with its swooping chorus and uplifting piano line is offset by the sweet melancholy of ‘Jesus Is A Rochdale Girl’, the groove and brashness of ‘High Ideals’ is counterpointed but the stripped down piano and choral backing of ‘The River’.

Ironically, perhaps the only mis-step on the entire album, a slightly mawkish reprise of ‘The Birds’ revocalised by an old man backed by a saccharine sweet Christmas carol choir, is bookended by two of the record’s stand out tunes in ‘Open Arms’; with its wonderfully over the top refrain of ‘open arms for broken hearts’, a line that would be insufferably pompous coming from anyone else but Elbow get away with it because they convince you that they truly mean it, and the closer ‘Dear Friends’. The latter being a fabulously understated and uncompromisingly downbeat way to end the album.

With ‘Build A Rocket Boys’ Elbow have remained true to the principles that have brought them the success that they long deserved and as a result made an astonishingly beautiful record where every track is aching with nostalgic emotion and remarkably consistent in quality. There is enough here to satisfy the fans they have gained through the Mercury prize winning, Olympics sountracking last few years but also plenty to reassure those that  have resolutely stuck with them ever since ‘Newborn’ first exploded on to our senses, and that is no mean feat in itself.