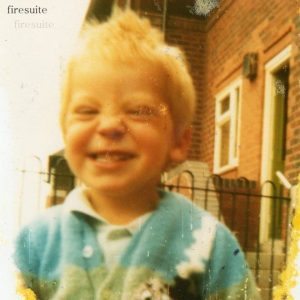 For me ‘You’re An Ocean Deep, My Brother’ by Firesuite was something of a slow burner. On first listen I thought ‘Yeah, that’s nice enough’ but over the subsequent few weeks I found myself going back to it, almost subconsciously, again and again until one day it burst in to flame in my mind and I realised ‘Fuck me, this album is absolutely magnificent’!

Sounding somewhat like a blend of the wall of noise guitar attack of early Smashing Pumpkins mixed with the tense and emotive expressionism of (and possibly they won’t thank me for this comparison but I loved them ‘back in the day’) JJ72 and some of the musical exploration of 4AD’s more sophisticated sonic pioneers. All in, it’s an incandescent mixture.

The album kicks off with ‘Of Little’ Faith’ which is actually maybe my least favourite track on the whole record, just falling a tad short of the standard of what follows, but from second track ‘Amity’ through ‘Blushed  & Bruised’, ‘Sammy Davis Jr Jr’ & ‘Stay’ it’s like napalm dropped from airsupport. An absolutely phenomenal run of songs that just keep cranking the intensity up and up, particularly ‘B&B’ which is a total monster of a tune; ebbing and flowing throughout its six and a half minutes, building and crashing back down again, epic. ‘Sammy Davis Jr Jr’, in contrast, is just one and a half minutes of all out, full adrenaline attack, mental.

By the time the meandering experimentalism of ‘Sci Fi Lullaby’ arrives it’s like a welcome breath of oxygen after the intoxicating smothering, the shear density, of the last four tracks. This relief doesn’t last for long mind as ‘Beneath The Roses’ builds from its deceptively gentle opening to another full blown conflagration, this may well be the stand out tune on the whole record. That said, next track ‘Left Hand Never Moves’ gives it a good run for its money, delivering yet another extraordinary sonic explosion.

On ‘You’re An Ocean Deep, My Brother’ Firesuite have managed that rare trick of taking music that appears to have a profound sadness at its heart but make it uplifting, intense, beautiful, powerful and enervating. A truly special record.