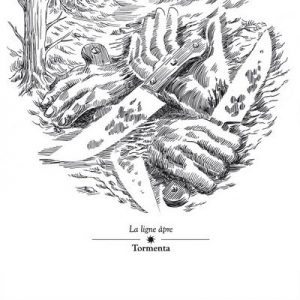 Holy. Shit. That was pretty much my reaction when I pressed play on ‘La Ligne Âpre’ by Tormenta.  Never having heard of these guys before I genuinely had no idea what they sounded like beyond the fact they were on the increasingly consistently brilliant Africantape label, home to previous E&D faves Papaye, Aucan & Big’n, so nothing really prepared me for the intense aural assault that was to follow.

The only way to describe these guys in a way that other people can get a grip on is as Math Metal but it’s so much more than that. Other than that I really have no references for you because I don’t know anyone else that sounds like Tormenta, which is a shame because they are so awesome it hurts. Maybe the closest they have as peers are the likes of Maybeshewill or And So I Watch You From Afar but even they don’t play it this hard, with such sustained aggression, for so long.

‘Pagan’ launches the album with a riff so intense it’s like being hit in the face with a mallet, but in a good way. Just as I was thinking ‘oh, it’s a Post Metal album’ off they jump it to something completely different and then before you can draw breath we’re back to the first riffs, and now something else entirely. It’s like Frank Zappa joined Metallica, that sort of febrile imagination applied to the raw power of a juggernaut. Mind blowing.

And on it goes from there, each subsequent track trying to up the violence quota, time changes, odd chordings and twitchiness on what has gone before. It’s hard to pick out particular tracks to talk about because the whole piece is so incredible, but ‘Felure’ needs a mention for the lead guitar work alone, some unbelievable fret work there layered over riffs from the bowels of Hell itself and closing track ‘Ubris’ just for its sheer complexity and ingenuity.

In all, an album of power and ferocious, coruscating intensity, it sounds like it should be a soundtrack to a dystopian, post-Armageddon, cyberpunk movie, probably directed by a combination of John Carpenter and David Lynch. If it’s true like they say that Rock and Roll is the Devil’s music then I think he may just have found the band to convey his message in its purest form. If you are any way a fan of heavy, complex, intelligent music then seriously, you have to have to have this album in your life.