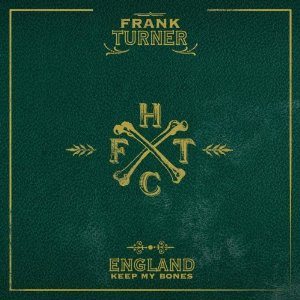 A week in advance of the official release of Frank Turner’s new album, England Keep My Bones, NME streamed the album in its entirety on their website: https://www.nme.com/news/frank-turner/56962 So, sitting at home on a fairly grey Bank Holiday Monday, what better to do than to stick it on and have a listen?

Now, as an unashamedly large Frank Turner fan, I pre-ordered ‘England Keep My Bones’ as soon as it became available and I’ve actually heard quite a few of these songs already, having seen him 4 times so far this year, but it’s fantastic to finally have them on demand, to be able to listen to them properly, to really absorb the lyrics and the meaning and the musicality. It’s also fantastic to be able to listen to them as they were recorded – with full band and, in one song, a choir – rather than on solo guitar which is how Frank normally performs live.

The album’s opener, ‘Eulogy’, starts with incredibly lyrical muted brass (think Hovis ad), lulling you in to a false sense of security before blasting your ears with this huge orchestral climax, which dies right back down for the final refrain “But on the day I die I’ll say at least I fucking tried, and that’s the only Eulogy I need” – and what’s more, it does all of this in about 1 ½ minutes. Without a doubt, this is the best start to a Frank Turner album so far (and yes, I do have all of them).

‘Peggy Sang The Blues’ is the next track up, which is one of the ones I do already know, but the full band version really adds something to the song, and showcases the breakdown before the final chorus much better; stripping everything back to just Frank and his guitar – an effect that is lost in his solo live sets.

‘I Still Believe’ is up next, and I was quite surprised to see this on the album as he was touring this as early as last Summer, and it appeared on the Christmas ‘Rock & Roll’ EP. However, it’s undoubtedly an anthemic song and provides a definite focal point for this album, which I guess merits its inclusion.

‘Rivers’ is the first track which really connects with the theme behind this album (‘England Keep My Bones’), and contains some beautiful folk-violin motifs, as well as the quite lovely line “The only place I’ll lay my hat down is by an English riverside”. This theme continues through ‘An English Curse’ – a fantastic, unaccompanied number in an English folk-song style about King William’s invasion of Britain – ‘If I Ever Stray’, and ‘Wessex Boy’, in which Frank talks about how nice it is to be back in his home town (in stark contrast to ‘This Town Ain’t Big Enough For The One Of Me’, from ‘Campfire Punkrock’, where he laments “And I still want to be buried here just like I said, but I’d prefer it if you’d wait until I’m actually dead”).

My personal highlight on the album is ‘I Am Disappeared’, a dark tale of nightmares and claustrophobia which I connect with slightly more than is probably good for me; “And on the worst days, when it feels like life weighs ten thousand tonnes / I sleep with my passport, one eye on the back door, so I can always run”. It’s this heartwrenching honesty that first led me to fall in love with Frank Turner, the first time I ever saw him live and he sung ‘Long Live The Queen’ with a tear in his eye. There is hurt and pain woven inextricably through his songs (‘Imperfect Tense’, ‘The Next Round’), but it never seems self-indulgent and is often very self-deprecating (‘The Real Damage’, anyone?) which I think is a large part of his now widespread appeal.

The album closes with another stroke of genius, ‘Glory Hallelujah’. This song was recorded in a church, with a choir, however the lyrics begin “Brothers and sisters, have you heard the news? The storm has lifted and there’s nothing to lose. So swap your confirmation for your dancing shoes, because there never was no God” and carry on very much in that same vein. In a cheeky yet very sharp move, the style of this song, its musicality, the organ and the tambourines make it very reminiscent of a school hymn, which gives a massive sense of incongruity to the song, while at the same time making it utterly impossible not to sing along to the refrain; “There is no God, so clap your hands together. There is no God, no heaven and no hell”. It went down very well at The Wheelbarrow earlier this year, and I can see it being a big number at Glastonbury.

In short, this album is good. I’m not sure I’d say it’s his best, at this stage, but I’ve only listened to it a few times and so the tunes and lyrics aren’t indelibly burnt into my brain as yet. It’s a continuation of his musical evolution which, in my opinion, started around ‘Poetry Of The Deed’, and it’ll be very interesting to see where he goes next.