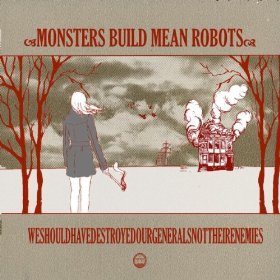 My wife just asked me a minute ago (on a lovely Saturday afternoon in So. Cal) what I was writing. I told her, without looking up from my outline,”I am writing a review of a great band called Monsters Build Mean Robots.”

She sort of rolled her eyes at me and went back to getting the house ready for whatever upcoming event she is currently getting ready for.

I hadn’t given any thought, really, to the name of this quartet from Brighton. In our (the Royal We) world, bands often have long or abstract or even silly-ish names.

Roiling it around in my noodle some more, I realized that Monsters Build Mean Robots, the name not the music, sounds like some Anime (Japanese cartoons, as if you didn’t know) show or something that my teen son would pull up on the Netflix.

I don’t ever, ever, ever! pick musical groups based on their names. Or if I have, or ever do, I should be smacked about the head and shoulders with an old broom. And reminded that judging a band by the name is stupid and that I should know better!

MBMR (their initials that I will use from now on) produce complex, flowing tuneage with some political or social commentary jammed in there lyrically, quietly and almost self-consciously at times. They describe themselves on the Book of Faces as Post-Rock, and who am I to argue? They could have been called Hammered Dogshit on Rye and labelled Post-Coital Polka Punk, and I would still like their music. A lot.

Their latest effort, ‘WeShouldHaveDestroyedOurGeneralsNotTheirEnemies’, is 30 minutes of complex, flowing, soaring songs that I almost immediately fell in love with. Being a not-very-critical critic, I usually like the new music that I get from the higher-ups here at Echoes, but my handler at the Home Office nailed my musical tastes (yet again!) with MBMR and ‘…Enemies’.
I immediately loved the fact that MBMR create music that reminds me of two legendary Scottish acts and personal favs: Mogwai and The Blue Nile.

MBMR says on their website that vocals and lyrics have become more of a focus in their music in the recent past, and that they were mainly an instrumental side-project when they were launched. I think the commitment to music that tells a story and has distinctive parts (beginning, end, climax/denoument etc, all without words) which is almost requisite for purely instrumental groups, clearly comes through to the listeners of MBMR.

The vocals are understated and almost morose at times (like The Blue Nile), but also soaring, anthemic and almost hymn-like at turns. In fact, on my favorite track, ‘Psalm 57 (or) All That Gold Did Not Help Your Soul!’ has what sounds like a number of singers (possibly a choir?) on the final repetitions of the chorus. I don’t have any insight or information on the nature of the song, but with all the fiscal turmoil here (in San Diego, CA, USA, and the UK and the WORLD), I like to think that MBMR are reminding the greedy that they can’t buy humanity back. This song in particular reminds me of ‘Happiness’ by The Blue Nile, which has a similar choral feel.

There are tinges of Oceansize and Elbow on ‘The Witches and the Liars’, which has uplifting yet melancholic (Jake’s all EMO today!) piano and textures of sound behind, building and building only to end with some faded-out noises coming through my headphones. Parts remind me of ‘Music for a Nurse’ with some Radiohead for a chaser.

The rockinest song on this one is called ‘Lament 77 (We Will Follow!). It’s got a strong bassline throughout, and to me would likely be the song most likely to get more mainstream recognition. It’s a protest song-in-disguise, with just the tiniest echoes of Welsh new-waver/protesters The Alarm (I am almost 40, forgive me! But still check them out!).

I can’t find anything to dislike on this album, and I have listened to it (according to RDIO) at least 20 times over the last couple of weeks. To be listening to any record end-to-end that much in that relatively short period, to me, shows that there is a lot to it, and that it’s one of those slow burners that is good or decent at first, but that gets better with subsequent listens and keeps your (my) interest time after time.

As I mentioned, I found this record on RDIO, and also on Spotify, but as always, I would encourage anyone that loves this album to buy it so that MBMR can continue to make music and share their message. Buy this now, and be UPLIFTED!