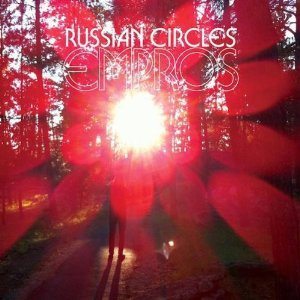 The new album by Russian Circles, ‘Empros’, reminds me of driving at night; the pleasure of absorbing all senses with the music blasting and just you and the road. The unification of only what is ahead in the headlights and images flying past, looking familiar but slightly different on the outer edges of your vision and as the miles pass and the album plays it opens up glimpses of a dawn exposing its layers of times new and familiar. Building on the magnificent ‘Geneva’ this album is a tour de force finally showing the potential promised in ‘Enter’ and ‘Station’.

For anyone that has seen Russian Circles live it is evident that Sulivan/Cook/Turnkrantz are trying to bring their live experience to record, and succeeding. Building layer upon layer of sonic dynamics that take you along the journey from the opening bars of ‘309’ to the closing song of ‘Praise Be The Man’ with its spiritual uplifting crescendos that have elements of dream drone pop that J Spaceman would be more than ecstatic with writing. Which somewhat belies some of the influences on this 6 track opus.

When I think about Russian Circles I think about how the rhythm section adds a bedrock to the songs, while Sullivan layers textures that invoke memories or dreams past and future. Turnkrantz drumming is something to behold and drives the songs into areas that leave you gasping. Sullivan sculpts atmospheres that span the ethereal sounds of his acoustic guitar to a feedback clarion call to the metal gods which transcend a gut wrenching heaviness that is shocking in its beauty.

For me, the stand out track is ‘Schipol’. It contains in its 6 minutes everything that is right about Russian Circles but without the post apocalyptic visions set out by ‘306’ and ‘Mládek’ before it, I feel it’s respite from the heavy riffs wouldn’t work. If I have one criticism it is that ‘Empros’ drifts a little after ‘Schipol’ but that can be forgiven in light of the force that comes before it and the album’s sublime ending.

This is the album that Russian Circles have been promising for a number of years and puts them at the top of the tree in Post rock/metal/whatever you want to call it genre. The only thing better than this album is to see them live – but this is a very close second.