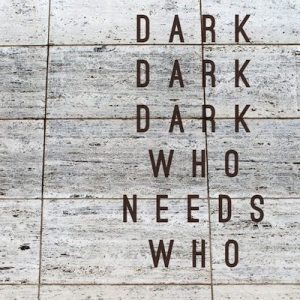 The first thing that strikes you, when listening to the new album from Minneapolis’s Dark Dark Dark, is that it is, very specifically, a break-up record. In early 2011, the relationship between singer Nona Marie Invie, and the band’s co-founder/producer Marshall LaCount ended. The band took a five-month break at the end of 2011, to allow time for healing and reflection, before reconvening in New Orleans earlier this year. Whilst one should always use caution when drawing comparisons between the private lives of artists, and their work; from the opening lines of the title track on ‘Who Needs Who’, it appears that this is, clearly, a record about the end of a love affair: “All I have, the memory of trust, I tried to keep it close.” Indeed, it is the honest, emotionally direct nature of the lyrics that is perhaps most surprising. For a band that has often preferred operating in the shadows – obscuring or subverting the more literal meaning of their work – this is quite a different approach.

That is not to say that there is no ambiguity here. On the contrary, the lyrics are filled with all the contradictions and inconsistencies one might expect to find at the end of any failed relationship. “Tried to be good, but I get tired, running around, trying to manage all that I want” Invie sings in ‘Tell Me’, before switching to a more accusatory tone in the chorus: “I want to live in a time when you cherished me”. The attribution of blame seems to be a fairly consistent theme throughout the record. On ‘The Great Mistake’ Invie sings: “… you tried to take the best of me, and you tried to take everything, but the great mistake was mine”. It’s also interesting to note the lack of a question mark in the album’s title. It makes the question appear less pointed, more contemplative, and open to different interpretations.

Musically, ‘Who Needs Who’ picks up very much where its predecessor ‘Wild Go’ left off. The title track, which opens the record, starts as a plaintive, piano led ballad, with slight melodic echoes of The Pogues and Kirsty Maccoll’s ‘Fairytale Of New York’, before launching into a mad dash of spiralling accordion and dipping, swooping horns. It is one of a number of musical highlights on the album and brings to mind the minimalist Americana of Sufjan Stevens’ ‘Michigan’, and the 21st Century polyrhythmic folk of Joanna Newsom.

Another album highlight, ‘It’s A Secret’, features a similarly beautiful, cascading accordion line, which weaves in and out of harmony and discord, subtly mirroring the lyric’s emotional uncertainty. Elsewhere, the album is more downbeat and muted in tone than ‘Wild Go’. Whilst this helps create a suitably sombre landscape for Invie’s narratives, one is occasionally left yearning for more of the upbeat, quick-fire musical interplay, which they do so well. It does, however, give the record a very consistent sound and mood, which further enhances the emotional weight of the lyrics.

‘Who Needs Who’ continues, what might be called, a recent resurgence of the break-up album, with Eels’ ‘End Times’ and Joanna Newsom’s ‘Have One On Me’ being other notable examples. The honesty and directness of the writing gives the record an authenticity, which resonates strongly with the listener. It is clear that the pain in these songs comes from a real place. It will be interesting to see, once these wounds have healed, where the band will go next.

Posted by Robin Maddicott of The Blood Choir.