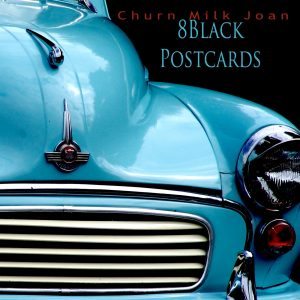 Colin Robinson and Richard Knutson are seasoned musicians with a background in prog/punk/post-punk who have seen many fads and fashions in music pass-by and have mingled at different levels with some revered names in the alt-rock canon.

Those of you with a more eclectic knowledge of the current UK prog/post-rock scene may be aware of Big Block 454, Robinson’s long-standing, prolific and ever-shifting band project, and also possibly know of Knutson’s Plum Flower Embroidery project.

Here, with Churn Milk Joan we find a meeting of the two in a package that grooves, unsettles, exhilarates and occasionally makes you smile.

Including contributions by guitarist Pete Scullion and vocals by Marion Sutton, the new album 8 Black Postcards presents five tracks of unclassifiable genre-bending, all recorded in Robinson’s hometown of Hebden Bridge (seemingly a hive of avant-garde activity).

Opening track Fell Through The Sky opens with an almost-motorik beatbox loop that gradually, along the course of its 7 minutes, develops into an intense, darkly hallucinatory guitar-led noise jam. Emotionally desperate vocals interject at times, as if to suggest moments of lucidity for the narrator. Like in a 50’s US army acid experiment; the narrator occasionally noting his feelings and impressions….Fell Through The Sky.

Robinson often cites Zappa and various krautrockers as a major influence and this becomes apparent throughout the album. Without resorting to pastiche or reverie, Churn Milk Joan are forging a peculiar path between referring to past music and creating a music for the present. There’s no evocation of bygone days or futurism….if anything, this is existential music.

There are elements of the duo’s other musical projects (Robinson’s mellow and place-specific Jumble Hole Clough and Knutson’s PFE) in Menagerie, a gentler, spacious and quite beautiful guitar soundscape which gradually morphs into avant-garde tape-manipulation-style collage of noise and found sound.

We return to experimental dub-funk and punk-funk for Boom Dipper Stick, the album’s closer. This extended workout distills the components of virtually the entire album into one track.

The beauty of 8 Black Postcards is that, despite being recorded initially as improvisations, there is a coherency to it, a one-ness; without becoming too uniform. The musicianship is admirable but never becomes the end to which all other means becomes secondary. There’s a willingness, nay a necessity, to experiment with form and structure; and no instrument, or personality, overpowers the whole.

The album is dark in a slightly unhinged way. Some lovely, almost-haphazard sounding, improv grooves. Great building guitars and soundscapes. And a feel somewhere in between early Talking Heads and The Normal. If that’s your thing (as it is mine) you should buy it.

8 Black Postcards is available direct from Churn Milk Joan’s Bandcamp site as a download (wav, flac, MP3) for whatever price you see fit to pay (including free).