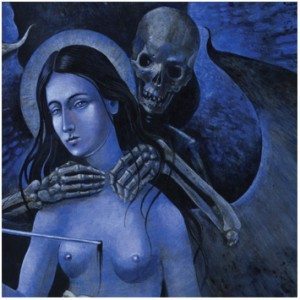 Out April 16th through

Aosoth formed in 2002 as a side project of French black metal act Antaeus. Eventually, Antaeus called
it quits altogether, allowing the members of Aosoth to focus on their brand of blackened death metal.
Focused, they have. With IV: Arrow In Heart, the band's fourth full-length album, Aosoth have
unleashed an infectious and epic new animal.

In an age when a lot of black and/or death metal bands care more for flashy technical musicianship over quality writing, it is quite refreshing to hear songs that have a bit of (black) soul; organic, layered, and ambient, as well as being crushingly brutal. Most every track on IV: Arrow In Heart is long, but never boring. Vocals atop innovative musical patterns and arrangements is the norm with Aosoth. Strong riffs and spot-on blast-beats, too. Nothing comes off as being blatantly formulaic. Nothing sounds stagnant. Songs like 'Temple of Knowledge' and 'One With The Prince With A Thousand Enemies' basically pull out a gun and force you into a long, black car, kidnapper style. Once inside, you're bludgeoned repeatedly with the butt of said gun. Yet, you enjoy the beating as well as the spooky, bleary-eyed, and bleeding ride. Destination: Hell.

For a three-piece, the band—made up of MkM, Bst, and Inrvi—sounds huge. The production strikes a
balance between lo- and hi-fi; sitting comfortably (and almost perfectly) in the middle. The cover art by
Benjamin Vierling is reminiscent of Italian Renaissance paintings and is outstanding in its own right.

Aosoth has gone on record saying making this album left some of them “physically wounded.” I can believe it. This is good, solid blackened death metal. Recommended by Satan himself. Now, get in the fucking car!