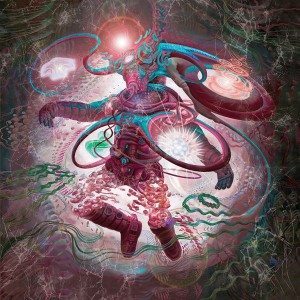 Welcome to the world of Coheed and Cambria, a name you should be familiar with if you’re into music that falls into the realms of Prog rock/ Alt rock/ Post Hardcore.  Having been together under the aforementioned band name since 1998, Coheed and Cambria have taken their fans on not one, not two, but now seven thoroughly enjoyable conceptual records, that; supported by comic books and graphic novels,  collectively tell the continuous sci-fi story of  “The Armory Wars”.

The Afterman: Descension is the second part of a double album, following on from The Afterman: Ascension; each showing the journey of  fictional character, Sirius Amory as he travels into space to find out what makes “The Keywork” - a fictional galaxy made up of 78 planets - function.

For new fans, the ongoing storyline isn’t something you need to be familiar with to appreciate the album. Or any of them actually. But it’s interesting to keep in mind when assessing where writer, composer, and lead singer Claudio Sanchez is coming from when he put pen to paper for this album (with help from  lead/rhythm guitarist. Travis Stever on ‘Away We Go’, ‘Iron Fist’ and ‘Dark Side of Me’).

Atmospheric, percussion laden opening track, ‘Pretelethal’ gently eases you into the album with radio navigation voices in the background, preparing you for an out of world experience.  Like singing from the inside of a cave, Sanchez’s simply states , “This world will miss none of us…” then the drum beat drops, the electric guitar comes in as he changes key to melodically bellow the chorus “who will repair this broken heart?” A question that thoughtfully remains unanswered.

‘Key Entity Extraction V Sentry The Defiant’ brings back Sanchez’s ridiculously unique vocal range, familiar compositions that fans can instantly identify who they belong to, the second they hear a Coheed and Cambria song.  Chunky guitar riffs, heartfelt percussion, and screamy, absurd, vocals from Sanchez make this track a good one to have a little bit of a mosh to. ‘The Hard Sell’ also falls into this familiar category, with added metal infused funk.

‘Number City’ takes a different direction. It’s an experimental track that features bouncy orchestrated melodies, with specific reference to a horn section , a rarity on former Coheed and Cambria albums. There’s no specific direction to this song, which at one part reminds me a bit of the feeling of being trampled on by a heard of tutu wearing, dancing, pink elephants from that Disney film Fantasia. I’m sure this probably isn’t the desired effect they were going for but you win some you lose some! It’s an interestingly layered track though to say the least.

‘Dark Side Of Me’ is a soft, personal song where Sanchez shrieks his way through a metal-esque ballad of remorse and regret. “I promise you there is no weight that can bury us beneath the ghosts of all my guilt” poignantly says he. The track ends with a distorted , navigation, mission control, lady-voice (you can tell I’m big on my science fiction). Whatever, I clearly don’t know her name or what her job description is, but it’s a deep reminder of the journey of Sirius Amory, where she/it/lady-voice addresses him directly and for the first time, we are given an answer from Sirius. As a summary of the trials and tribulations of Sirius’s journey The voice explains “I am not equipped to comprehend human rational, Sirius, is this what love is?”broken by a moving piano melody. Sirius eventually replies, “Yes”.

Being familiar with Coheed and Cambria’s back catalogue, I would happily say that their sound and style, although fundamentally relatable at times, has matured in a way that shouldn't be too off putting for old fans, and may be of interest to new ones.  Lyrically, their story has developed into themes based around heightened emotion, and intimacy, rather than younger episodes of disconnection and distrust. However, Sanchez’s vocals are too high pitched and shrill for some. It’s a tone that personally I find encapsulating as opposed to irritating , and regardless of personal taste – a voice you won’t forget in a hurry.