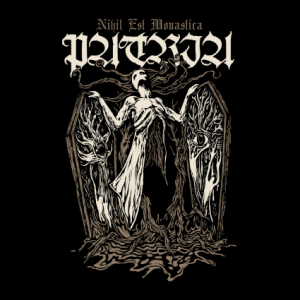 Patria, made up of Triumphsword (vocals) and Mantus (all other instruments), layer ringing chord progressions, melodic aural nuances, and organic environmental noise over hypnotic riffs to create a world of their own with Nihil Est Monastica. Harsh vocals sit perfectly within the mix. On a whole, the record is immersive, quite literally. Infectious, even. Eerily enough, this is its 13th spin on my turntable. It is that good. Songs such as 'Nyctophilia' and 'Sacro Vale dos Encantos' should appease most genre purists. Others, like 'Conquering Death's Palace', take the listener to different places in time/space, and even touch on other genres. That particular track recalls early Coroner, at least to my ears. This is a very good thing. Also included is a great take on a Sarcófago classic, 'Black Vomit'. Patria make the song their own. It fits seamlessly.

The touring/live version the brooding Patria will be rounded out by Igniis Inferniis (Guitar), Stormbringer (Bass), and Abyssius (Drums); a highly recommended show if their path crosses yours at any point in the near future.

Nihil Est Monastica should appear on many top ten lists for 2013. It will most definitely be on mine. Patria's tagline reads: “The Return of the South American Black Metal Mist.” Scandinavia, look out...these guys know what they're doing, and they do it well. Might be time to take things up an evil notch. Enter Patria's dark mist at your own risk. Stay for an eternity... or at least until the album ends. You won't regret it.