(((O))) : The Asphodells – Ruled By Passion Destroyed By Lust 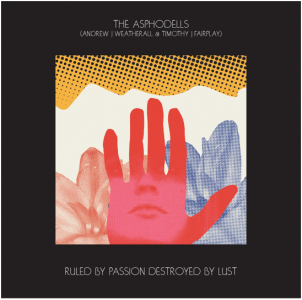 There is no denying Andrew Weatherall's influence on British music over the last two decades, and if you're unfamiliar let's take a slight detour for a brief history lesson of some of my personal favourites: Finding his feet in the then-blooming Acid House scene, a young Andrew found himself literally churning out face-melting remixes, original mixes and founding labels such as Boys Own Fanzine, famous for bringing the world The Chemical Brothers. Later Weatherall formed the Warp-signed group Sabres of Paradise and, [my personal favourite] Two Lone Swordsman. Still not enough for you? As well as working on remixes for the likes of Paul Oakenfold, The Happy Mondays and The Horrors, Weatherall has produced some particularly noteworthy records, such as Primal Scream's Screamadelica. Too young for Primal Scream? Perhaps you're familiar with fuzz-trance prodigies Fuck Buttons? Their groundbreaking second LP Tarot Sport was also produced by Weatherall, as was Scotland's grey cloud The Twilight Sad's most recent record, No One Can Ever Know.

So there's a bit of context for who we're dealing with, and that's not to say he’s alone this time. The Asphodells is a new two-piece group featuring both Andrew Weatherall and Timothy Fairplay; another experienced producer and DJ running in the same circuits with, as this record proves, an equal strength in the creation of pedigree music. But, of course, the true test is how the pair play together, right?

Kicking off with a distinctly housey beat it's clear that unlike some of Weatherall's more recent production work, the dancefloor is definitely the intended listening place for this record as ‘Beglammered’ripples along with guitars and sitar synths. It's almost as if we're dropped in the middle of the crystalline desert and there's belly-dancing babes everywhere [every cloud has a silver lining].

Keeping tempo, ‘Never There’is a lyrically intriguing piece illustrating the form and behaviour of some strange poltergeist: "A gas with a shell / a ghost with skin / ether with scales and mercury fins." The track has a distinct Madchester feel to it, taking The Stone Roses' baggy sound of acid house and guitar wobbles.

‘Never There’ isn't alone in the northern acid flashback as frequent references to the likes of Happy Mondays seem to pop up here, there and well pretty much everywhere throughout the record. We're not left full in the heat of the summer though, oh no! Every sun must go down and every night must draw in, which The Asphodells bring about in ‘Another Lonely City’, an 80's nighttime-drive.

This turning point in the record begins to see a deeper feeling of space with an increase in vocal mangling and, well, reverb. See also: ‘Late Flowering Lust’and the neighbouring dub version that kicks straight in at the end of the song. It almost feels at this point that the producers have begun DJing and remixing their own material on the fly, and as a possibility it's not that absurd in the context of who we're dealing with.

Moving on from ‘Late Flowering Dub’ the record moves into its pinnacle with tracks like ‘We Are The Axis’and ‘One Minute's Silence’, two numbers expanding on the same format as before but both displaying an excellent step above the rest. The first is a synthy, spacey freak disco that's too cheesy to be true in only good ways. Modulated analogue synths burst and sweep like dry ice across a basement club and the reverberant, robotic vocals drive a-la Pet Shop Boys. Fantastic.

The second of the two, ‘One Minutes Silence’, is the sort of music you'd expect at the countdown before a space-shuttle's launch. A steady pulsing beat and looping synth cycles rotate endlessly as a woody, determined bass begins climbing a ladder; the entire song is essentially a crescendo (think ‘Atlas’ by Battles, if it was less or more of a dance-floor mutant. It's hard to tell which). Laying atop the repetition are steady variations of "Bring me a minute's silence, it's all I want to hear" until glittery, shimmering guitar arpeggios break into the forefront for, well a minute or so until, yes, the requests return once more.

The final noteworthy song in the collection is ‘A Love From Outer Space (Version 2)’,which must be better than the original since it's nowhere to be found. The song is the perfect closer for the record as it continues and develops on everything until that point: uplifting, energetic, exciting and fun: without a doubt a definitive moment… plus it's really really fun to sing along. Here's the lyrics so you can try it at home: "I know where she's coming from / space is where we both belong / want to tell her in the sun / this time nothing can go wrong."

Ruled by Passion, Destroyed by Lust is nothing short of an immense success for a pair of producers who've already celebrated much and have nothing to prove, except in their partnership. For a duo to appear from nothing but their individual reputations to form such a strong combined force is an incredible thing to witness (think Fripp and Eno, except groovier). The record at times feels reminiscent of (an admittedly unusual reference) many hours spent driving around Rockstar's opus Grand Theft Auto: Vice City… which, let's face it, for a Playstation 2 game has a better soundtrack than most movies. The entire record has the same retro party collection feel that comes out at every summer day-long party. There's diversity, variation and above all else a good constant groove and a solid driving force from beginning to end which belongs in two places: [1] the long sunny car drive and [2] the party at the end of the journey.

At many instances the record seems to echo the explosion of Caribou a few summers ago, or MGMT, or even when Animal Collective turned up again with Merriweather Post Pavilion even though musically there's not that many similarities. What Weatherall and Fairplay have done is very simple: they've stepped in a couple of months early to remind everyone that winter is finally over and that soon the long summer days will be here and you can bet who it'll be playing in everyone's stereos, record players, iTunes, iPods, web-blogs, cars, bars, clubs and festivals: The Asphodells.