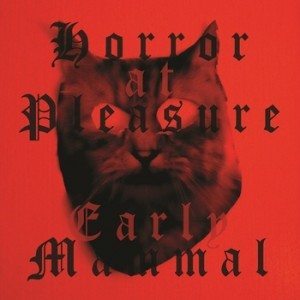 If you know Neil Young's Out of the Blue and Into the Black then you're old (like me) or you have good taste in music. Either way Early Mammal has done this on their new album Horror at Pleasure. The "blue" being 'Right Hand' and the "black" being 'Uncle Scary's Left Hand'. In between these two related tracks are eight heavy, Psychedelic, Blues, Fussed -out songs that make up this well crafted debut album.
Early Mammal consist of Rob Herian - guitar & vocals, Ben Davis - drums, Denzi Belendri - Organ & Synth. Some of their musical inspirations while planning and recording this album were, Captain Beefheart, White Hills, High Rise & Hawkwind. That's some list, one which I would take to a desert island. Has Horror at Pleasure lived up to those influences? Hell yeah!!
There is no question that Early Mammal know their music. Rob's guitar playing will bang on your ear drums with some heavy riffs. He also has a lovely feel for the slower tacks. 'Right Hand', 'Coming Back', 'Uncle Scary's Left Hand' and my personal favorite 'Going out'. These track have a blues feel to them except 'Going out', this is a bit more classical with some interesting sound bites and one track that I highly recommend to chill out to.
Denzi's Synth creates a Space, Ambient feel with just enough Prog to give the feeling that this band that could fit into any of the last four decades. 'To Find me Gone' and 'Checking the Bullshitter's Queen', gives Denzi a chance to show his Prog- style playing. Mix that with some Psychedelia and you have two 70's gems. I wish 'To Find me Gone' had been just a bit longer but then you would have to have waited even longer to hear 'Money Shot'. 'Final Witch', 'Demon or Saint', 'Money Shot' and 'Resurrection Men' are the heavy riff tracks that all stand up well in their own right. 'Demon or Saint' is another favorite for me. A bit of Beefheart vocals and just over half way through a guitar sound that will shake all the hairs on your body. Turn this song way up and enjoy. I did!
Throughout  Horror at Pleasure you will experience some brilliant guitar and some great Space/Prog, Synth/Organ but there is also the unsung hero Ben who's intelligent and consistently good drumming helps keep this album together. The only down side to this album is the production. It's not bad but needs a few tweaks here and there to bring the vocals up a bit. That said I would give Horror at Pleasure a very credible 4 headphones out of five. Keep that music coming guys.